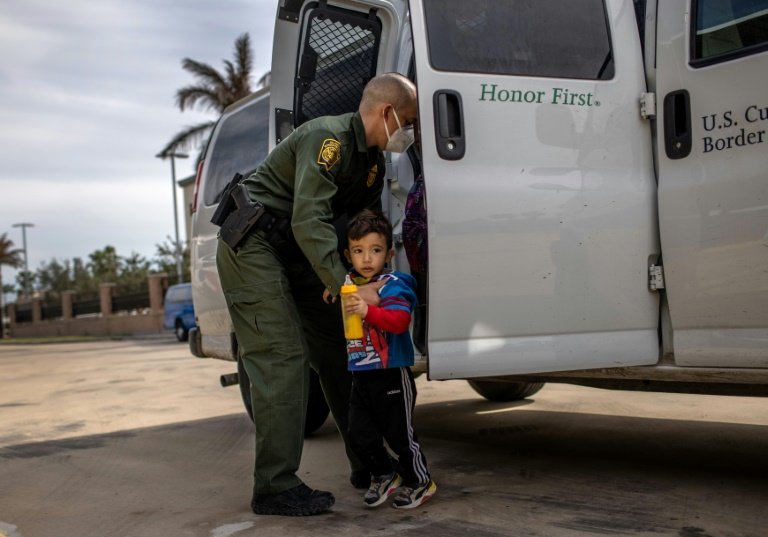 A US border agent transports a child who is seeking asylum to a bus station in Brownsville, Texas, on February 26, 2021 / © GETTY IMAGES/AFP

Thousands of minors without papers are arriving at the US border with Mexico, presenting President Joe Biden with a potentially major crisis in one of America's most politically sensitive regions.

Biden took office promising an immigration policy more humane than that of Donald Trump, but some migrant advocacy groups say the new Democratic president's decisions are luring undocumented travelers in what amounts to a beacon effect.

In line with a pandemic-rooted policy adopted by Trump, who cracked down on immigration both legal and illegal as part of his "America first" doctrine, the Biden administration is deporting most of the undocumented people who arrive at the southern border. The majority of them come from Central America fleeing violence and poverty.

But unlike Trump, Biden has opted against expelling minors who show up unaccompanied and are filling shelters set up to hold them, with limited capacity because of the coronavirus crisis.

Activists say a crisis is in the making.

Accepting kids without their parents, they say, can incite families to separate and result in widespread detention of children and young people.

"A lot of our border policies put parents in the position where their only choice is to send their child up alone through immigration, because it's the way that the child can be the safest," said Allegra Love, an attorney with the Santa Fe Dreamers Project, which provides free legal services to migrants. 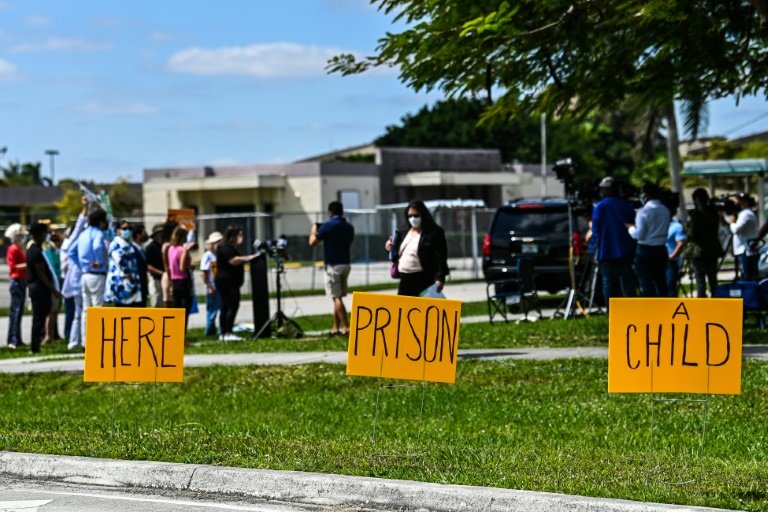 Demonstrators call for an end to the detention of unaccompanied minors arriving in the United States, outside a facility in Homestead, Florida previously used to hold undocumented children, on March 4, 2021 / © AFP

Most of the minors who arrive unaccompanied, some as young as six, must spend 10 days in quarantine and after two negative Covid-19 tests are sent to holding facilities spread around the country while authorities try to find some relative of theirs in the United States.

Critics of this policy say what ends up happening is the minors' stay in such facilities, where serious abuses have been reported in the past, can drag on for months.

"There's a lot of pressure for these families to self separate," said Joshua Rubin, an activist with Witness at the Border.

He said US immigration authorities are "falling into old patterns because you know they feel pressured.

"The way they're handling it, they are causing somewhat of a crisis," said Rubin.

These minors can end up suffering and being traumatized, he said.

For the Biden administration, "it's an unenviable position to be in. They're getting criticism from all different political perspectives," said Jennifer Podkul, a lawyer with Kids in Need of Defense, which has worked at the US-Mexico border.

"It's very hard and they have to start from scratch. Trump totally decimated the US protection system," said Podkul.

Minors traveling alone from Central America are vulnerable to sexual exploitation and forced labor because of abusive people they meet along the way, said Belinda Bradford, assistant director of Good Neighbor Settlement House, a shelter that helps families in Brownsville, Texas, across the border from Matamoros, Mexico. 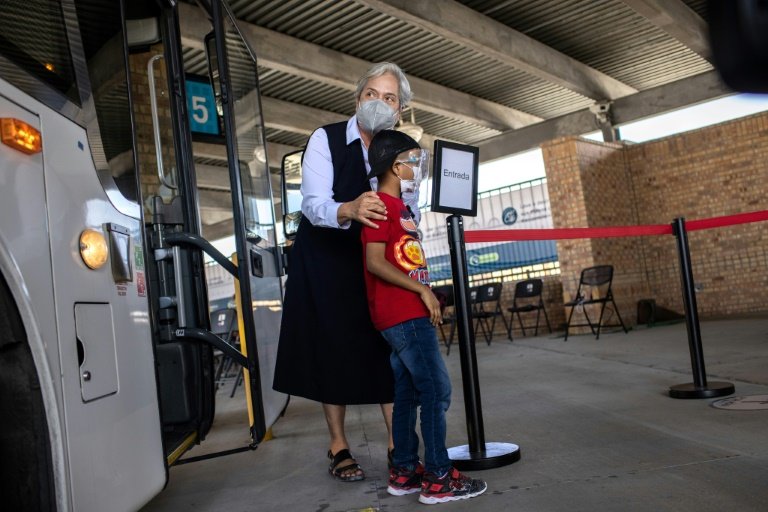 Sister Norma Pimentel of Catholic Charities escorts a child who has requested asylum upon arriving in the United States on February 26, 2021 in Brownsville, Texas / © GETTY IMAGES/AFP/File

The Biden administration recently reopened a temporary shelter in Carrizo Springs, Texas, that can hold some 700 adolescent migrants. And there have been reports it is planning to reopen an even bigger one in Homestead, Florida -- prompting protests at the site.

"Our hope and expectation is that won't stay open very long, that we will be able to provide for every kid that comes across the border to safely be housed in a facility that is licensed," Biden told the Spanish language broadcaster Univision last week of the Texas facility.

The number of undocumented migrants arriving at the border started falling in mid-2019, when Trump approved measures to prevent them from entering the United States to request asylum.

But the number has been on the rise again since April. US officials say this is due in part to hopes stirred among migrants by some of Biden's campaign promises, including a plan to create a path to citizenship for the 11 million people living in the US without papers.

Activists explain that Trump's tough deportation policies led to a build-up of migrants massed at the US border -- which also partly explains the current surge.

In January more than 5,800 unaccompanied minors were stopped by US border agents.

The figure does not yet surpass the numbers recorded under Barack Obama or Trump. In May 2019, a record 11,000 entered the US. But this could change.

"I don't think that (the arrival of migrants) will ever end for the United States, you know. For centuries, the United States has been a land of opportunity, a land for new beginnings," said Bradford, of the Texas shelter.