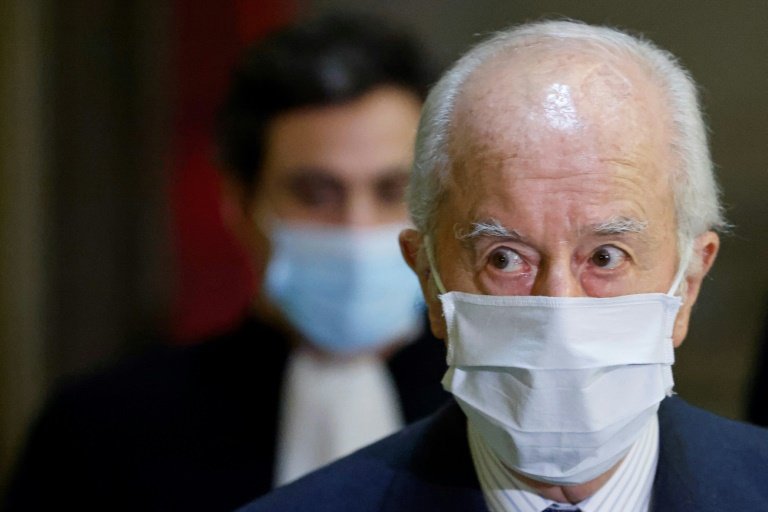 Prosecutors have called for Balladur to be sentenced to a one-year suspended prison term and a fine of 50,000 euros / © AFP/File

A French court on Thursday acquitted former prime minister Edouard Balladur of corruption charges but handed a suspended jail term to his former defence minister, in a case that involved kickbacks from arms deals with Pakistan and Saudi Arabia.

The verdict by the Law Court of the Republic (CJR), which sits to try serving and former ministers for alleged violations committed in office, came just days after ex-president Nicolas Sarkozy was convicted in a case that sparked a national debate on the extent of political corruption.

Balladur, 91, had been accused of funnelling illicit commissions from arms deals to his unsuccessful presidential campaign in 1995.

His former defence minister Francois Leotard, 78, was convicted of complicity in the misuse of assets and handed a suspended two-year prison term and a fine of 100,000 euros ($120,000).

Neither was present in court for the verdict.

Balladur and Leotard were charged in 2017 over kickbacks found in the contracts for submarines sold to Pakistan and frigates sold to Saudi Arabia between 1993 and 1995.

The allegations came to light during an investigation into a 2002 bombing in the Pakistani city of Karachi that targeted a bus transporting French engineers.

Fifteen people were killed including 11 engineers working on the submarine contract, with the Al-Qaeda terror network initially suspected.

But the focus shifted and French investigators began to consider whether the bombing had been carried out as revenge for a halt in commission payments.

Balladur lost his 1995 presidential bid to Jacques Chirac, who allegedly cut off the payments negotiated by the previous government.

Leotard was found guilty of playing a "significant and organising role" in the creation of a network of intermediaries who took large commissions on contracts signed with Pakistan and Saudi Arabia.

Prosecutors had alleged that the commissions totalled 550 million francs, or 117 million euros in today's money, some of which were funnelled back to Balladur's campaign.

At the centre of the case was a deposit of 10.25 million francs in cash made into Balladur's campaign account three days after his electoral defeat in 1995.

Balladur claimed the money came from donations and merchandise sales, but prosecutors linked the money to cash withdrawals made in Switzerland.

In its decision to acquit Balladur, the court ruled that the origin of the money could not be determined.

Balladur welcomed the acquittal but said in a statement: "I regret that it needed a quarter of a century of motivated and organised slander to finish in this way."

Leotard said he was "ashamed for the French justice system and its dangerous excesses", while a lawyer for the families of the engineers killed in Karachi expressed their disappointment.

In Pakistan, the government removed its Chief of Naval Staff Admiral Mansurul Haq in April 1997 over corruption allegations related to the case. He was later charged but released after negotiating a plea bargain in 2012.

One of the middlemen in the Pakistan deal, Ziad Takieddine, has also made -- and retracted -- claims that he delivered suitcases of cash from Libyan dictator Moamer Kadhafi to help with Sarkozy's 2007 presidential campaign.

Those claims are part of a separate investigation.

On Monday, the 66-year-old ex-president was found to have formed a "corruption pact" with his lawyer to convince a judge to obtain and share information about yet another inquiry into his campaign financing.

Sarkozy, who has been dogged with investigations since leaving office in 2007, has said he will appeal against his conviction and was considering complaining to Europe's top rights court.

"I never betrayed the trust of the French people," France's president from 2007 to 2012 told TF1 channel in a primetime interview on Wednesday evening.