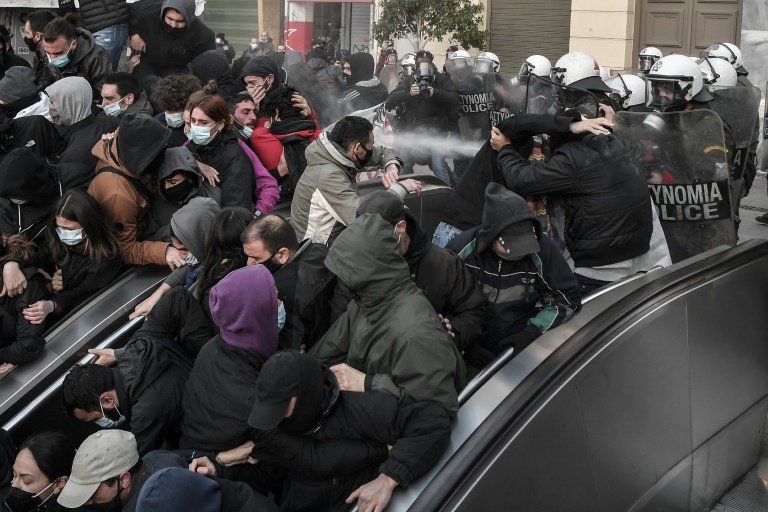 Police in Athens on Friday fired tear gas into a metro station entrance as they scuffled with demonstrators defending a far-left hitman, near death after a long hunger strike in prison.

An AFP photographer said the police fired the irritant gas into a central Athens station as they chased down dozens of protesters.

Several protests have been held in recent weeks in support of Dimitris Koufodinas, the top assassin for the defunct November 17 extremist group, who has refused food for nearly 50 days after being refused a prison transfer.

His partner and son's mother, Angeliki Sotiropoulou, told AFP on Thursday that the 63-year-old was now in a "critical condition" and "borderline comatose".

Koufodinas is seeking a transfer from a high-security prison in Domokos, central Greece, to Korydallos prison in Athens to be near his family.

Prison authorities argue that only suspects in pre-trial detention, not long-term convicts, are held at Korydallos prison.

Supporters of Koufodinas have demonstrated outside the home of Greek President Katerina Sakellaropoulou, and vandalised the offices of two ministers.

Dubbed 'Poison Hand' by Greek media, Koufodinas was the main hitman of the far-left Greek extremist organisation November 17 that was dismantled in 2002.

He is serving multiple life sentences, having been convicted of 11 killings.

One of Koufodinas' victims was Pavlos Bakoyannis, a lawmaker who was the father of Athens Mayor Costas Bakoyannis and brother-in-law to Prime Minister Kyriakos Mitsotakis.