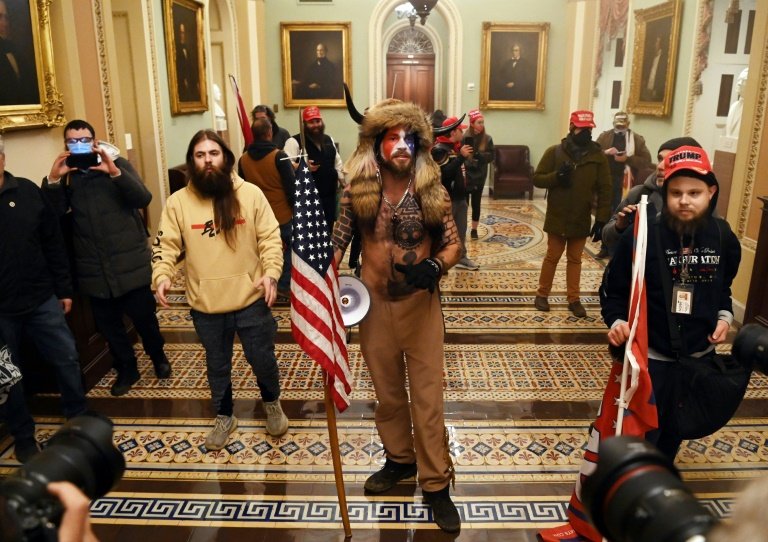 'American dozo': One of the rioters in the US Capitol reminded West Africans of traditional hunters in the vast, lawless Sahel region / © AFP/File

As they watched a violent mob smash into the US Capitol, some in Africa could not help but see a little irony in the chaos incited by President Donald Trump, who once famously called African nations "shitholes".

Others across the continent offered Washington some tips on how run a democracy -- advice that has so often gone in the other direction.

"It's time for the African Union to send in peacekeepers to protect American citizens," a Rwandan Twitter user joked.

"The lesson-givers would already be sending investigators."

But some in Africa, which has seen a wave of political crises over the last year including a coup in Mali and numerous ageing leaders trying to stay in power via constitutional trickery, saw something in Trump that reminded them of problems at home.

"We often look like those we snub," he said in an editorial on the Jeune Afrique magazine's website.

"What happened at the Capitol shows that Americans are finally recognising the value of Africa and are copying its post-election practices," wrote a Twitter user in Madagascar.

Images of one of the Trump supporters who stormed the Capitol on Wednesday -- a bare-chested rioter wearing facepaint and a horned animal fur hat -- were particularly popular in West Africa.

Fahad Ag Almahmoud, the secretary-general of a Malian armed group, tweeted that his pro-government militia solemnly "condemned the presence of dozos in the Capitol".

Dozos are traditional hunters in the Sahel who have been accused of myriad abuses and wear outfits strikingly similar to the rioter, even down to the talisman hanging from his neck.

"Our cousins the American dozos did not stay on the sidelines of this historical event," a Twitter user in Burkina Faso wrote.

In the West, the rioter -- identified by US media as Jake Angeli, a prominent follower of the far-right QAnon conspiracy -- reminded many of Jamiroquai singer Jay Kay, who tweeted saying it wasn't him.

While European leaders were quick to condemn the shocking scenes in Washington, African heads of state were in no hurry.

However Zimbabwean President Emmerson Mnangagwa used the opportunity to call for the US to lift sanctions that Washington imposed in 2002 over rights abuses under former dictator Robert Mugabe.

"Yesterday's events showed that the US has no moral right to punish another nation under the guise of upholding democracy," Mnangagwa tweeted.

Bienvenu Matumo of DR Congo's Struggle for Change (Lucha) pro-democracy movement told AFP that "we must stop saying that it's only Africans who don't want democracy".

"We have proof that the refusal to leave power after an electoral defeat is not only the prerogative of Africans."

"What happened reminds us that human nature, regardless of colour or origin, needs safeguards -- education, strong institutions, responsible leadership -- to restrain its basic instincts," he said.

Journalist Boubacar Sanso Barry wrote in the Guinean newspaper Le Djely that "we should break with all these hasty and somewhat racist judgements" of African countries.