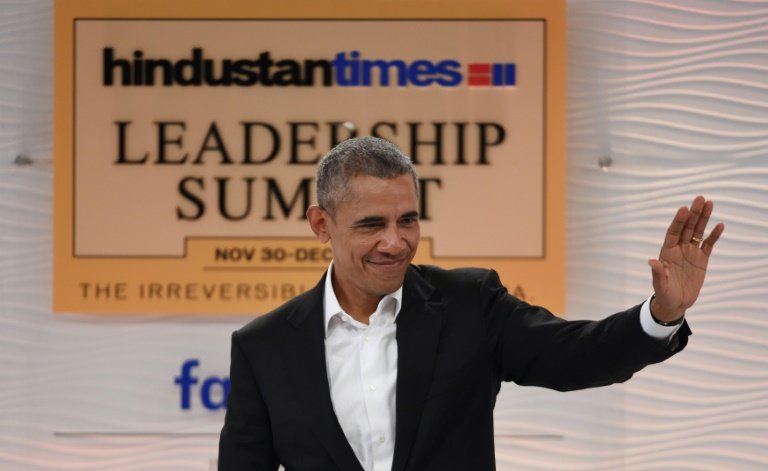 Former US president Barack Obama, seen speaking in 2017 in New Delhi at the Hindustan Times Leadership Summit, has made light of opposition figure Rahul Gandhi in a new memoir / © AFP/File

Former US president Barack Obama in his memoir has likened Indian opposition figure Rahul Gandhi to a hapless student, in biting commentary on the dynastic scion who twice led his party to crushing defeats.

In the book, "Promised Land," which comes out Tuesday, Obama writes that Gandhi has "a nervous, unformed quality about him, as if he were a student who'd done the coursework and was eager to impress the teacher but deep down lacked either the aptitude or the passion to master the subject," according to a review in The New York Times.

Gandhi, 50, has long struggled to combat perceptions that he is not interested in becoming prime minister, a position held by his grandmother Indira Gandhi and father Rajiv Gandhi, both of whom were assassinated.

He spent his younger years studying and working in the United States and Britain before returning to India with expectations of guiding Congress, the party that has led India through most of its years since independence.

Gandhi has aggressively attacked Modi's government on charges of fanning communalism and favoring business interests, but commentators have often described him as not being a natural politician.

He stepped down from the helm of the Congress party after last election debacle but his mother, Sonia Gandhi, remains its president.

Gandhi is not the only international figure on the receiving end of colorful prose by Obama, according to the review.

He describes France's flashy former president Nicolas Sarkozy as having "his chest thrust out like a bantam cock's."