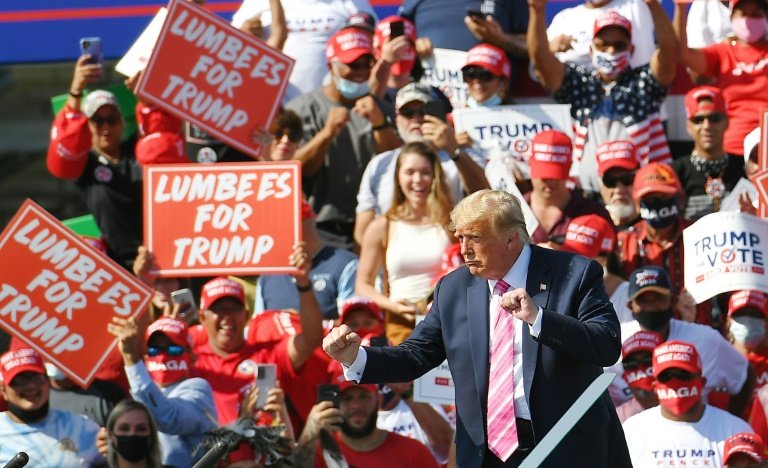 US President Donald Trump was in fighting spirits at a campaign event in Lumberton, North Carolina on October 24, 2020 / © AFP

President Donald Trump cast his vote Saturday in Florida ahead of another punishing day with three campaign rallies as he works to close the gap with Joe Biden and pull off a 2016-style upset win on November 3.

An ebullient President Donald Trump cast his ballot early in Florida on Saturday and was plowing through three swing state campaign rallies as he sought to close the gap with Joe Biden, with coronavirus cases surging ten days before Election Day.

"This election is a choice between a Trump super-recovery and a Biden depression," he told supporters under a hot sun in North Carolina, highlighting promises of a cure to Covid-19 and a rapid economic recovery.

And he shrugged off polls which continue to show his Democratic rival Biden leading the race.

"They want to depress you," he said of the political and media outlets reporting the numbers. "These polls are much better than four years ago."

The president's optimism came after he cast his own vote in Florida, telling reporters with a smile: "I voted for a guy named Trump." 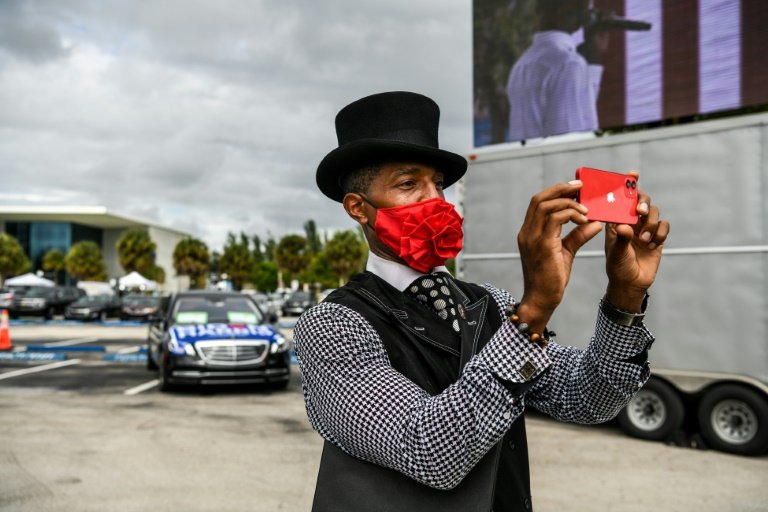 A Biden-Harris supporter takes a photo before the arrival of former US president Barack Obama at a drive-in rally in Miami, Florida on October 24, 2020 / © AFP

He thus became one of nearly 55 million Americans to cast early ballots in a year when the coronavirus has made in-person voting problematic.

Continuing his frenetic pace, the president was to hop-scotch later in the day from North Carolina to Ohio to Wisconsin -- returning to the White House only minutes before midnight -- as he works furiously to make up lost ground.

But the president's efforts have been inescapably overshadowed by a grim reality seized on by Biden: the US set a daily record for new Covid-19 cases on Friday, at nearly 80,000, with a further surge expected as cold weather arrives.

The virus has claimed 224,000 American lives, with no end in sight.

"That's Donald Trump's presidency," Biden said Saturday during a drive-in rally, one of two events planned for the day in his native Pennsylvania, a critical swing state. He spoke from a stage decorated with bales of hay and Halloween pumpkins.

"Yesterday (was) the worst day we've ever had," said Biden, who has been more restrained than Trump in his campaigning and careful to take precautions against coronavirus.

"Donald Trump said, and is still saying, we're rounding the corner. It's going away. We're learning how to live with it."

Biden added: "We're not learning how to live with it. You're asking us to learn how to die with it and it's wrong."

"The idea that somehow this White House has done anything but completely screw this thing up is nonsense," Obama told supporters at a drive-in rally in Miami, Florida.

"Donald Trump isn't suddenly going to protect all of us. He can't even take the basic steps to protect himself," Obama added, referring to Trump's hospitalization for Covid-19 three weeks ago.

Also slamming the president's failure to denounce white supremacy, and the many times he has lied in public, among other issues, Obama called on supporters to vote for his former vice president. 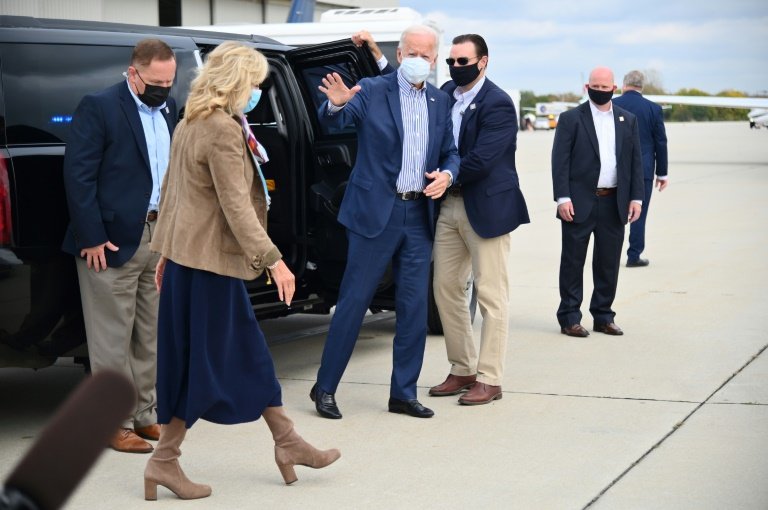 Democratic presidential candidate Joe Biden and his wife Jill Biden board a plane in Philadelphia, Pennsylvania, for the next campaign stop on October 24, 2020 / © AFP

"If we vote up and down the ticket like never before, we will elect Joe Biden."

Biden has a firm lead in national polls, and narrower leads in many battleground states like Florida that typically decide the winner of US presidential elections.

But Democrats are not about to forget the stunning upset Trump pulled off in 2016 when he defeated Hillary Clinton.

The president's current grueling travels aim to repeat that feat. 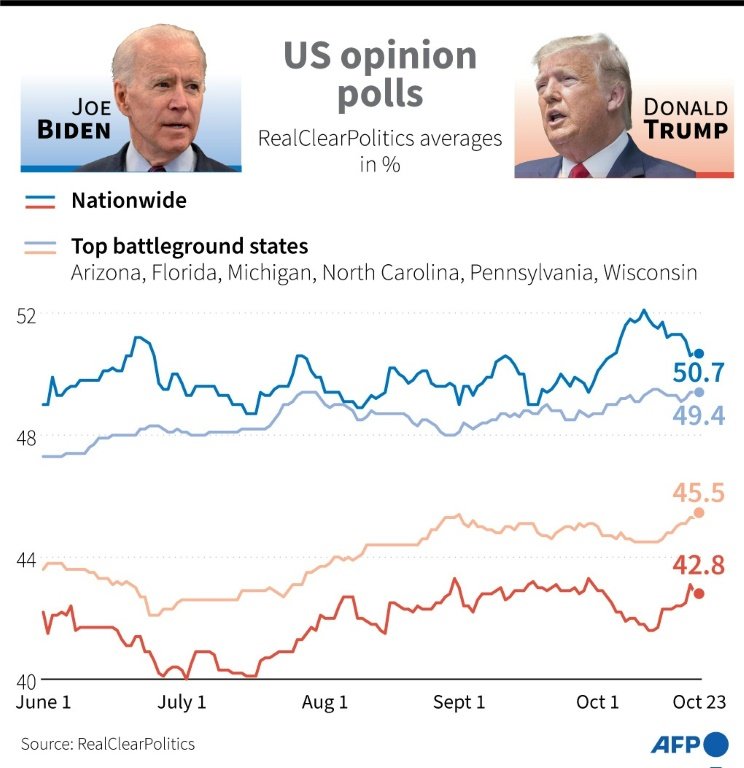 Trump's campaign has been turned upside down by the coronavirus crisis, which a majority of voters say he has handled poorly.

In addition to the national disaster, Trump's reelection bid has been hampered throughout by his own erratic and often bad tempered behavior.

At Thursday's final televised debate in Nashville, the president pivoted to the more even-keeled leader that aides have long been hoping Americans will see.

But whether this shift from the usually bruising diet of insults, grievances and conspiracy theories will be enough at this point is an open question.