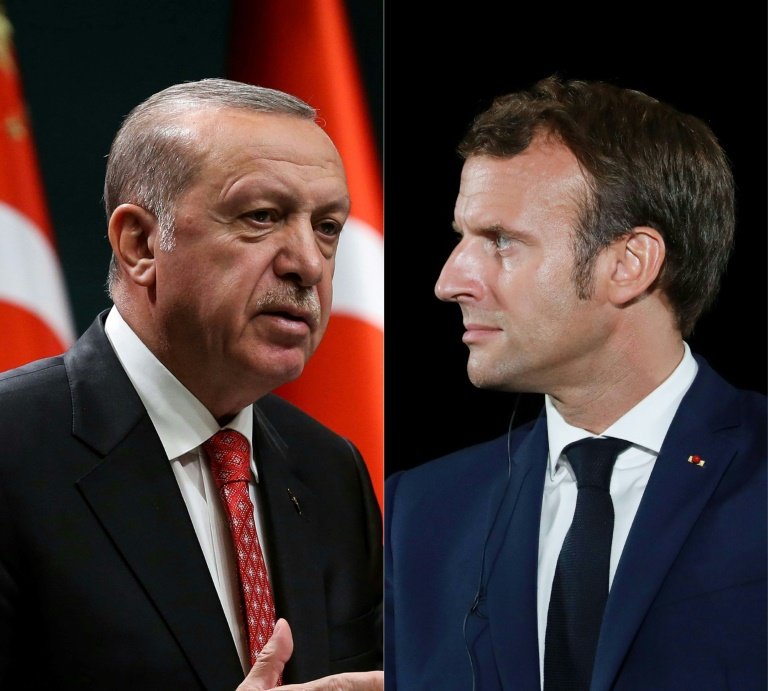 Macron and Erdogan are feuding about maritime rights in the eastern Mediterranean, Libya, Syria and -- most recently -- the escalating conflict in Azerbaijan's Armenian separatist region of Nagorno-Karabakh / © AFP/File

Macron and Erdogan are feuding about maritime rights in the eastern Mediterranean, Libya, Syria and -- most recently -- the escalating conflict in Azerbaijan's Armenian separatist region of Nagorno-Karabakh.

"What can one say about a head of state who treats millions of members from different faith groups this way: first of all, have mental checks," Erdogan said in a televised address in the central Anatolian city of Kayseri.

Macron's proposal to defend his country's secular values against radical Islam has angered the Turkish government.

Macron this month described Islam as a religion "in crisis" worldwide and said the government would present a bill in December to strengthen a 1905 law that officially separated church and state in France.

He announced stricter oversight of schooling and better control over foreign funding of mosques.

Turkey is a majority Muslim but secular country which is a part of NATO but not the EU, where its membership bid has stalled for decades over a range of disputes.

"What's the problem of the individual called Macron with Islam and with the Muslims?" Erdogan asked.

Erdogan also predicted Macron would not do well in the French presidential election in 2022.

"You are constantly picking on Erdogan. This will not earn you anything," said the Turkish leader.

"There will be elections (in France) ... We will see your fate. I don't think he has a long way to go. Why? He has not achieved anything for France and he should do for himself."

The latest rift between the two leaders is over Nagorno-Karabakh -- a majority ethnic Armenian breakaway region inside Azerbaijan, declared independence after the fall of the Iron Curtain, sparking a war in the early 1990s that claimed 30,000 lives.

Macron this month demanded that Turkey explain what he said was the arrival of jihadist fighters in Azerbaijan and said: "A red line has been crossed."

Erdogan on Saturday accused France -- a member of the Minsk trio tasked to resolve the conflict -- of "being behind the disasters and the occupations in Azerbaijan."

He told France: "You are in the Minsk trio. What have you done so far? Have you saved Azerbaijani lands from occupation? No. You only send arms to Armenians.

"You think you will restore peace with the arms you are sending to Armenians. You cannot because you are not honest."

Turkey has backed Azerbaijan in its latest campaign for Nagorno-Karabakh where hundreds have died since the fighting reignited in late September.

"Now, our Azerbaijani brothers are marching towards the occupied territories. They have started to reclaim them."