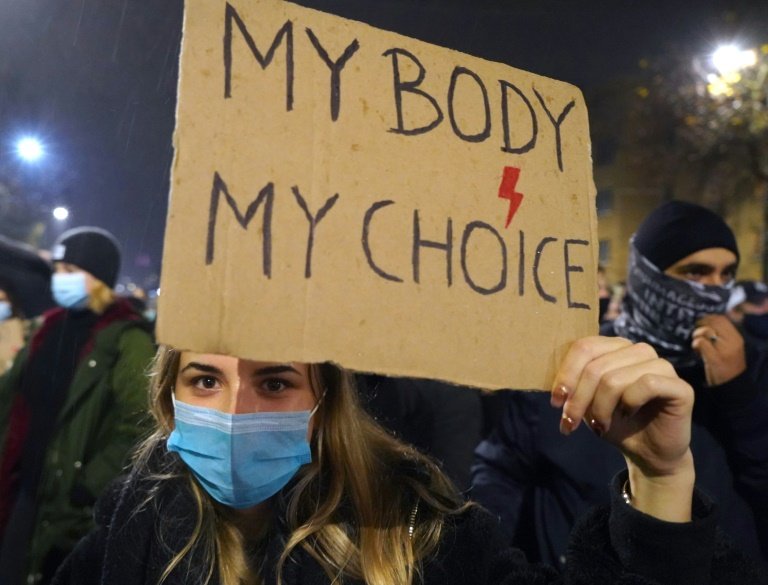 Thousands marched in cities across Poland on Saturday in the third straight day of protest against a near-total ban on abortion in the EU country, with some promising further actions in the coming days.

Thousands marched in cities across Poland on Saturday in the third straight day of protest against a near-total ban on abortion in the EU country, with some promising further actions in the coming days.

The protesters were reacting to Thursday's ruling by Poland's constitutional court that an existing law allowing the abortion of malformed foetuses was "incompatible" with the constitution.

The ruling has provoked an outcry from rights groups in and outside the deeply Catholic country of 38 million people.

Many of the banners and placards -- bearing slogans such as "Disgrace!" and "War on women" -- also carried the red lightning image that has become a symbol of the protests.

Opponents of the court ruling have called for a referendum on the right to abort malformed foetuses. And some have announced they will block traffic nationwide on Monday.

The ruling means that from now on, abortions will only be allowed in instances of rape, incest, or if there is a threat to the woman's life.

There are already fewer than 2,000 legal abortions per year in Poland -- and the vast majority of those are carried out due to malformed foetuses.

But women's groups estimate that up to 200,000 procedures are performed illegally or abroad each year.

The demonstrations went ahead in defiance of a government ban on public gatherings imposed as part of a wide spectrum of measures designed to stem a record spike in coronavirus cases in recent days.

Poland's President Andrzej Duda tested positive for the virus on Saturday as health authorities reported a near-record 13,628 cases over the last 24 hours, and with a record daily death toll of 179.

The consitutional court's verdict is in line with what Poland's Roman Catholic episcopate and the governing right-wing Law and Justice (PiS) party wanted.

The court has been reformed by the PiS government, and has since been accused of counting many judges loyal to the party in its ranks.

The changes at the court are part of a string of controversial judicial reforms by the PiS that have put Poland on a collision course with the EU over concerns they undermine judicial independence and the rule of law.

On Friday night, thousands of mainly young protesters gathered near the Warsaw home of Jaroslaw Kaczynski -- considered Poland's ultimate powerbroker as leader of the right-wing Law and Justice (PiS) party.

Ranks of police in riot gear barred their way from the house.

Elsewhere in Poland protesters gathered in main squares, outside PiS premises or near churches.

Its Commissioner for Human Rights Dunja Mijatovic called it "a sad day for #WomensRights".