Bolivian presidential candidate Luis Arce, the leftist heir to former leader Evo Morales, said his country had "recovered democracy" after an exit poll from TV station Unitel indicated he had won the election in the first round.

Bolivian presidential candidate Luis Arce, the leftist heir to former leader Evo Morales, said his country had "recovered democracy" after an exit poll from TV station Unitel indicated he had won the election in the first round with 52.4 percent of the vote.

By an unexpectedly large margin, Arce prevailed over centrist Carlos Mesa, who obtained 31.5 percent according to the poll, and guaranteed a return to power for the Movement for Socialism (MAS).

A private projection from the Jubileo Foundation gave Arce 53 percent and Mesa 30.8 percent.

The official count -- which could take days -- was less than eight percent completed by 2:00 am (0600 GMT). The usual rapid count had been abandoned after allegations of irregularities last year that led to Morales' November resignation after 14 years in power.

"Very grateful for the support and trust of the Bolivian people," Arce posted on Twitter early Monday, after the exit poll results were published. "We have recovered democracy and we will regain stability and social peace."

Interim president Jeanine Anez, who was not a candidate, congratulated Arce and his running mate David Choquehuanca on their apparent win.

"We still do not have an official count, but from the data we have, Mr. Arce and Mr. Choquehuanca have won the election. I congratulate the winners and ask them to govern with Bolivia and democracy in mind," the staunch MAS opponent posted on Twitter. 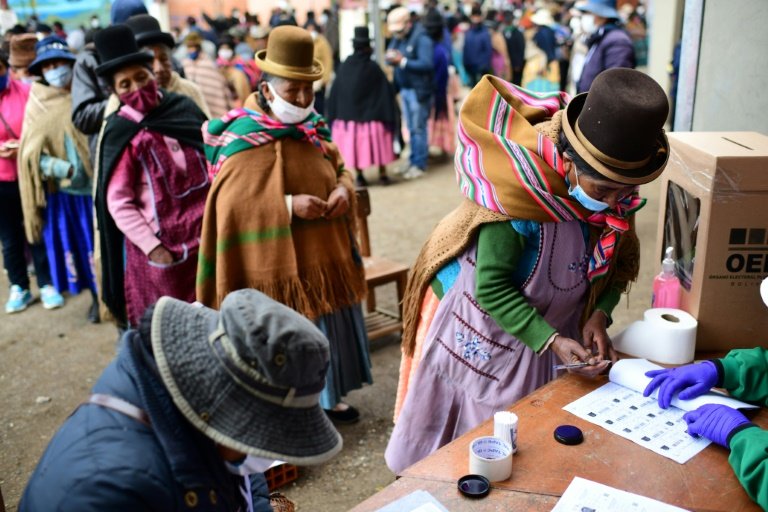 An indigenous woman signs after casting her vote at a polling station in Huarina, Bolivia / © AFP

Morales, claiming victory for his party at a press conference in Buenos Aires, where he lives in exile, said Arce would "return our country to the path of economic growth."

Arce was credited as the architect of the country's economic miracle under Morales, whom he served as economic minister.

The election, twice postponed due to the coronavirus pandemic, was the first in 20 years not to feature Morales, the country's first ever indigenous leader.

Voting, which is mandatory up to the age of 60, was slow in part due to coronavirus social distancing rules and some polling stations had to stay open longer as queues of people were still waiting to vote.

Arce had been expected to win the first round. The question was whether the 57-year-old could achieve the required 40 percent with a 10-point lead to avoid a runoff.

If he could not, polls had suggested centrist former president Mesa, 67, would likely triumph in a runoff with support from the other four candidates.

The contest came a year after Morales won an unconstitutional fourth term in an election that sparked weeks of protests, leaving 36 dead and 800 injured. Evo Morales was barred from taking part in the election / © AFP

The rapid count in 2019 suggested there would be no outright winner, but after it was inexplicably frozen for 24 hours, Morales had jumped into a winning lead over Mesa once the live count resumed.

A later audit by the Organization of American States found clear evidence of fraud.

Morales, who resigned and fled into exile, was barred from taking part this time but tried to ratchet up tensions during campaigning from his Argentina base.

But before the count began, Morales had urged calm and said "the election result must be respected by everyone."

He also promised to return to Bolivia "the next day" should Arce win. He is still being investigated for "rape and trafficking" over allegations he had relationships with underage girls, and even fathered a child with one. 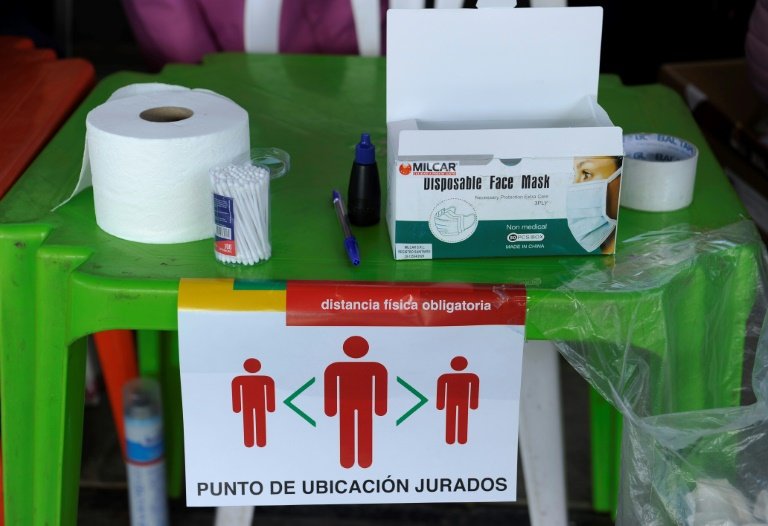 "Obviously there will be social upheaval... we just hope it won't last long," Clara Quitalba, 49, from the MAS bastion of El Alto on the outskirts of La Paz, told AFP.

"I don't know what will happen, but I fear the worst," said Virginia Luna, 41, in the capital.

Observer missions from the European Union, OAS and the Carter Center were present, while United Nations chief Antonio Guterres called for the result to be respected. The vote will bring to an end the year-long interim presidency of conservative Anez, who withdrew from the race a month ago as criticism rose of her handling of the coronavirus pandemic that has left more than 8,400 dead and infected 130,000.

Landlocked Bolivia, one of the poorest countries in the region despite its rich natural resources, is also experiencing its worst economic crisis in 40 years, with GDP expected to contract by 6.2 percent in 2020.

As well as choosing a new president, the 7.3 million eligible voters were electing a new Congress, where both chambers are currently controlled by MAS.