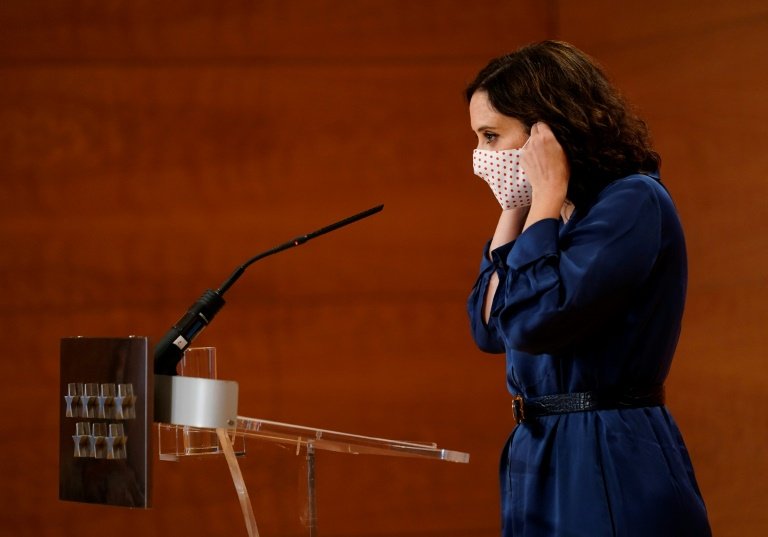 An outspoken hardliner who once wrote tweets for a predecessor's pooch, Madrid regional leader Isabel Diaz Ayuso has become the attack dog of the right to take on Spain's leftwing federal government.

Diaz Ayuso, who turned 42 on Saturday, has hit the headlines in recent weeks for her vociferous attacks on Socialist Prime Minister Pedro Sanchez for imposing a partial lockdown on Madrid.

A member of the conservative opposition Popular Party (PP), she took office just 14 months ago, with the epidemic taking hold just over six months into her term.

Responsible for Spain's wealthiest region with its population of 6.6 million, she has come under fire for not doing enough to contain the virus, which has spread like wildfire through Madrid.

But it is a charge she roundly denies, accusing the Sanchez administration of fudging the figures to justify the lockdown to slow the spread of infection.

"We are suffering under the most authoritarian government in the history of (Spain's) democracy," she told El Mundo newspaper.

"This government is the indisputable champion of liars," she railed, accusing it of trying to "sow chaos" as part of a leftwing plot "to change the country through the back door".

Telegenic with a wavy chestnut bob, Diaz Ayuso often peppers her speeches with libertarian references but critics say she has done nothing to address key shortages in healthcare staff and contact tracers. 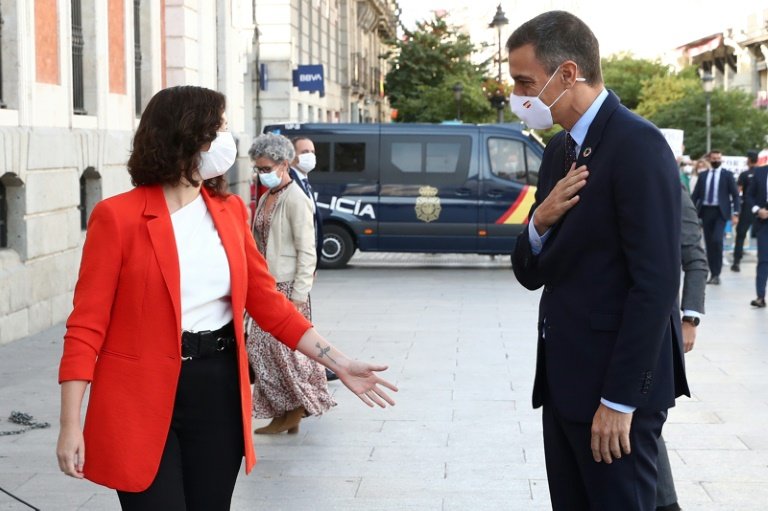 Diaz Ayuso, pictured with Sanchez, has showed herself to have an aggressively confrontational style / © POOL/AFP/File

From the outset, she has been the poster-child of a hardline faction of the PP, savaging plans for the relocation of dictator Francisco Franco's remains from a vast opulent mausoleum as a leftwing plot to undermine national unity.

"What next? Are you going to start burning down churches like in 1936?" she said after barely six weeks in office, referring to Spain's 1936-1939 civil war.

Her strategy of direct confrontation has been divisive but has also won her valuable exposure, said Pablo Simon, political science professor at Madrid's Carlos III University.

"In opposing the government, she's setting her own pace and many people already see her as the true leader of the opposition."

It's been an interesting trajectory for a woman who once ran the Twitter account of Pecas, the city's "first dog", who belonged to then Madrid leader Esperanza Aguirre.

"Uncontrollable. Liberal. Seductive," reads the profile of the Jack Russell terrier whose canine contemplations were conveyed on Twitter by Diaz Ayuso, who holds a master degree in political communications.

Born in Madrid in October 1978, she studied journalism at the city's Complutense University.

After several years dabbling in sports journalism and stints working in Ireland and Ecuador, she joined the PP's youth wing under Pablo Casado, now party leader, formally joining the faction in 2006.

She became a regional deputy in 2011 and worked her way through the ranks until Casado chose her as the surprise head of the party list for the May 2019 regional election.

Although the PP lost for the first time in decades, the Socialists were unable to form a majority, with Ayuso cobbling together the region's first-ever coalition, a rightwing alliance, and cementing her position as leader.

In choosing her, Casado was looking for someone "who would be controllable," Simon said, although now it was unclear whether she was "aligned with him or following her own agenda."

"Her strategy is divisive and the political style she has embraced is not something everyone agrees with," he told AFP, saying some in the PP saw her approach as harmful to the party's more moderate image.

But others say her recent prominence has been overblown in a city where most of the national and international media are based.

"Whoever is running the Madrid regional government appears bigger than they are," said Roger Senserrich of the political analysis website Politikon.