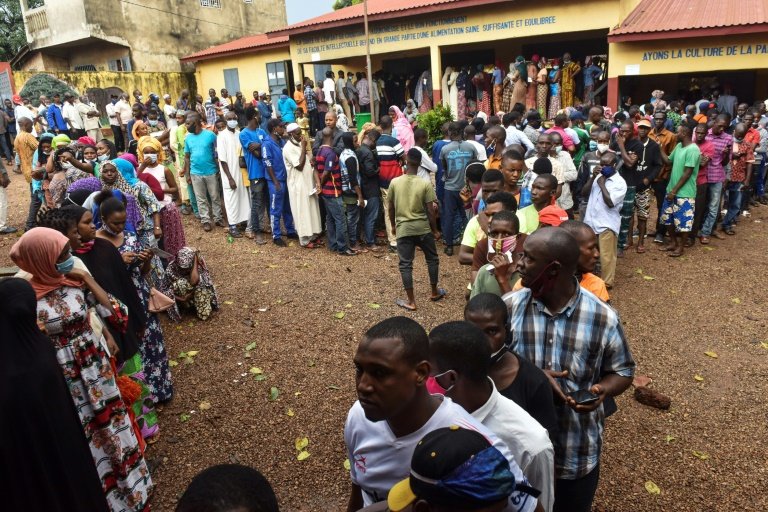 Voters queue at a polling station in Conakry on Sunday / © AFP

Polls closed in Guinea on Sunday, to fears of a looming electoral dispute, after a high-stakes vote in which the 82-year-old President Alpha Conde is seeking a controversial third term.

The election -- the first in a string across West Africa -- follows months of political unrest, where dozens of people have been killed during security crackdowns on mass anti-Conde protests.

Polls closed at 1800 GMT after a mostly calm day of voting, but there are already fears of post-election discord after Conde's main opposition rival, Cellou Dalein Diallo, suggested the president may "cheat".

"Alpha Conde cannot abandon his desire to grant himself a presidency for life," Diallo told reporters on Sunday, warning his rival not take power using "cunning and violence".

Before counting began, his supporters decried ballot-box stuffing and said its observers encountered obstructions at polling stations. Guinea's Prime Minister Ibrahima Kassory Fofana told local press there had been "small incidents here and there", but nothing major.

Political tensions during the campaign have also raised the spectre of ethnic strife, with Conde accused of exploiting divisions for electoral ends -- a charge he denies. 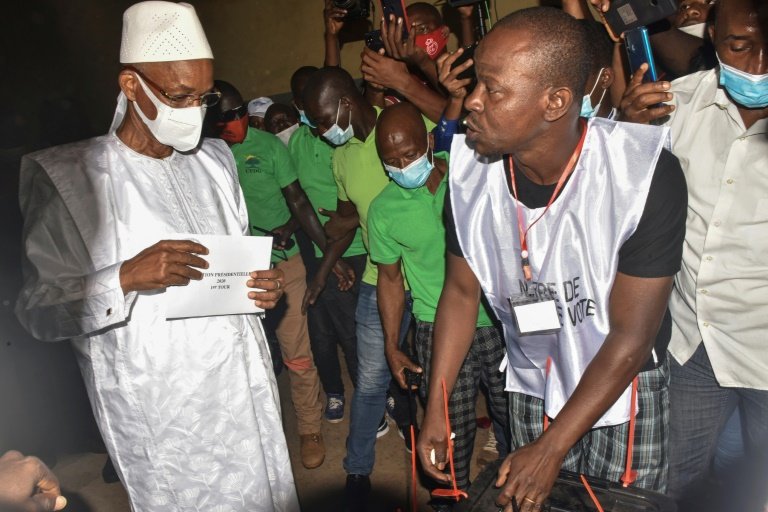 Guinea's politics are mainly drawn along ethnic lines: the president's base is mostly from the ethnic Malinke community and Diallo's from the Fulani people.

Security Minister Albert Damantang Camara told AFP there had been "no major incidents" on Sunday, but that he was concerned about suggestions that Diallo would not accept the result.

He urged him to "return to his senses".

"God will save us, inshallah," he said, adding that Guineans "want peace, not a fight".

Much of the tension in Guinea relates to a new constitution Conde pushed through in March, in defiance of mass protests, arguing that it would modernise the country.

The move controversially allowed him to bypass a two-term limit for presidential terms. 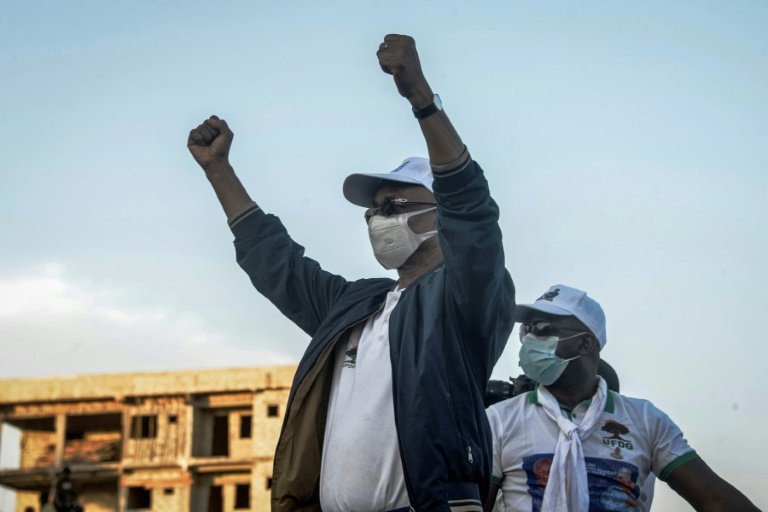 After decades as an opposition activist, Conde became Guinea's first democratically-elected president in 2010 and won again in 2015 but rights groups now accuse him of veering towards authoritarianism.

Wearing an off-white suit, the president cast his ballot in a school for the deaf and said he wanted a "free, democratic and transparent" election, with no violence.

He cast his vote, dressed in a white robe, in the Conakry suburb of Dixinn, an opposition stronghold. Earlier, he had urged his supporters to "show restraint".

Conde and Diallo have faced off twice before in tense polls in 2010 and 2015, but this year's are especially fraught.

The old rivals traded bitter insults on the campaign trail. Diallo frequently raised the issue of Conde's age and encouraged him to "retire with dignity".

But the octogenarian president brushed off the jibes, and often reminded feverish crowds of Diallo's tenure under the autocrat Conte.

Diallo told supporters he wants to turn the page on "10 years of lies", and criticised police repression, corruption, youth unemployment and poverty.

A self-described technocrat, Diallo also took to pointing at his watch in public, symbolising that Conde's time is up. 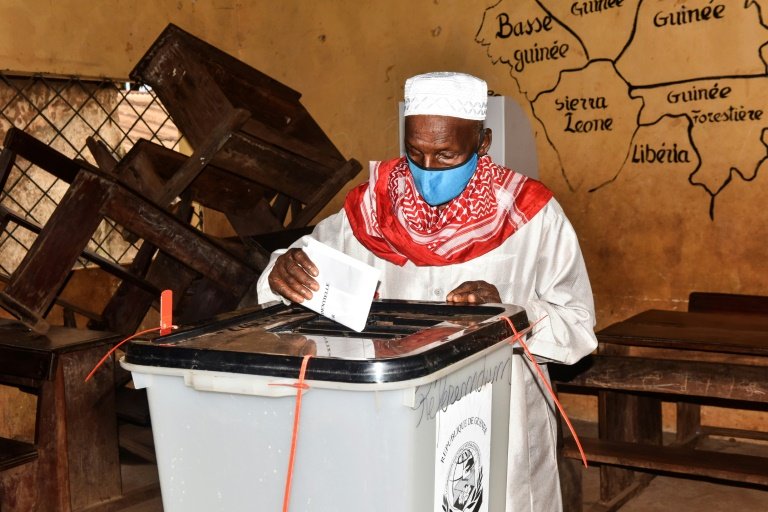 Some 5.4 million people are registered to vote / © AFP

Conde argues that he has modernised the nation of 13 million people, and this year adopted tactics from previous campaigns, telling voters he would make Guinea "Africa's second (economic) power after Nigeria".

Sunday's vote marks the start of a busy electoral cycle across West Africa, with votes also due in Ivory Coast, Burkina Faso, Ghana and Niger.

Some of the major issues in these elections bear a striking semblance to the political debate in Guinea. 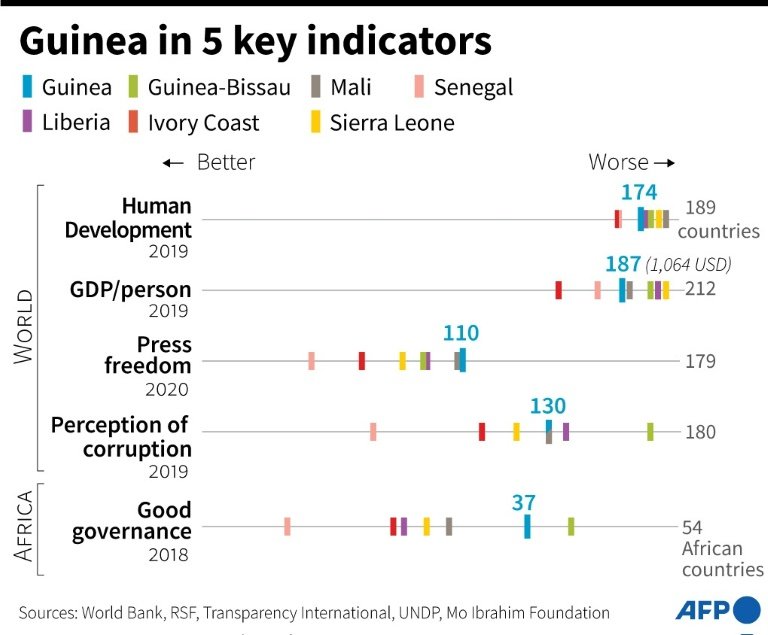 In Ivory Coast, for example, President Alassane Ouattara is running for a third term on October 31 after revising the constitution despite fierce opposition.

Activists are concerned that a Conde win would bode ill for democratic norms in the region.

There are also concerns that the president and Diallo will both claim victory, as neither side has signalled a willingness to concede defeat.

Some 5.4 million people were registered to vote, and initial results are expected to be announced in several days.

Ten other candidates besides Conde and Diallo were contesting the poll.

A second round run-off vote is scheduled for November 24, if needed.