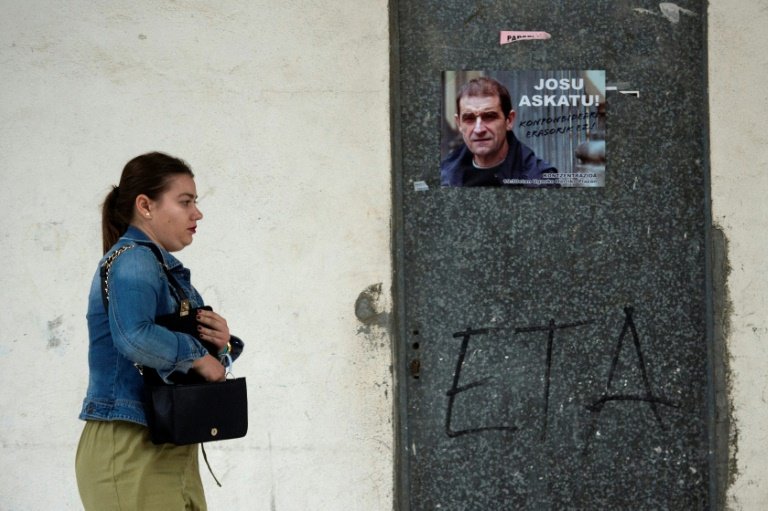 A poster calling for the release of Josu Ternera, one of the most influential leaders of former Basque separatist group ETA, in the Spanish village of Miraballes / © AFP/File

The former leader of Basque separatist group ETA, Josu Ternera, will face justice in France after years on the run, with the first of two retrials in Paris to begin on Monday.

Ternera, whose real name is Jose Antonio Urrutikoetxea Bengoetxea, headed the group from 1977 to 1992 and is thought to have been behind a strategy of combining car bomb and shooting attacks in the Spanish state in the 1980s.

He was later designated as a negotiator in talks with the Spanish government that ultimately failed.

In hiding since 2002, Ternera was convicted in absentia in 2010 on charges of associating with terrorists after his fingerprints were found in an apartment known to be used by ETA operatives in Lourdes, southern France.

Ternera was sentenced to seven years in prison, and given a new eight-year term in 2017 after again being convicted in absentia of participating in a terrorist organisation.

After eluding police for years, he was arrested in May 2019 at a hospital in the French Alps where he was to undergo an operation.

As the prison sentences had been handed down in his absence, he was able to request a retrial.

On Monday and Tuesday, he is to appear before the Paris court of appeal for participating in the ETA between 2002 and 2005.

He is then scheduled to appear on Wednesday and Thursday before a Paris court, this time for his alleged role in ETA's political apparatus between 2010 and 2013.

Ternera, who is 69 and has health problems, has been under house arrest in Paris with an electronic bracelet since July.

Spanish authorities had been hunting Ternera since 2002 in connection with a 1987 attack on a police barracks in the northern city of Zaragoza that killed 11 people, five of them children.

His extradition to Spain in connection with that attack was approved in September 2019, but an appeal is pending.

Meanwhile a decision is due on November 18 on another extradition request, concerning suspicion of involvement in the 1980 murder of a director of French tyre company Michelin in Spain.

Ternera was previously arrested in 1989 in France and sentenced to 10 years in prison, before being freed in 1996 and expelled to Spain.

He played a key role in secret talks held in Switzerland and in Norway beginning in 2005 with emissaries of the Socialist government of former prime minister Jose Luis Rodriguez Zapatero which ended in failure. In 2006 he was sidelined by more radical ETA members.

Created in 1959 at the height of Francisco Franco's dictatorship, ETA waged a relentless campaign of killings and kidnappings in its fight for an independent Basque homeland in northern Spain and southwest France, leaving at least 853 dead.

Weakened by the arrest of its leaders, ETA announced a permanent ceasefire in 2011 and began formally surrendering its arms in 2017. In May 2018 it was formally dissolved.