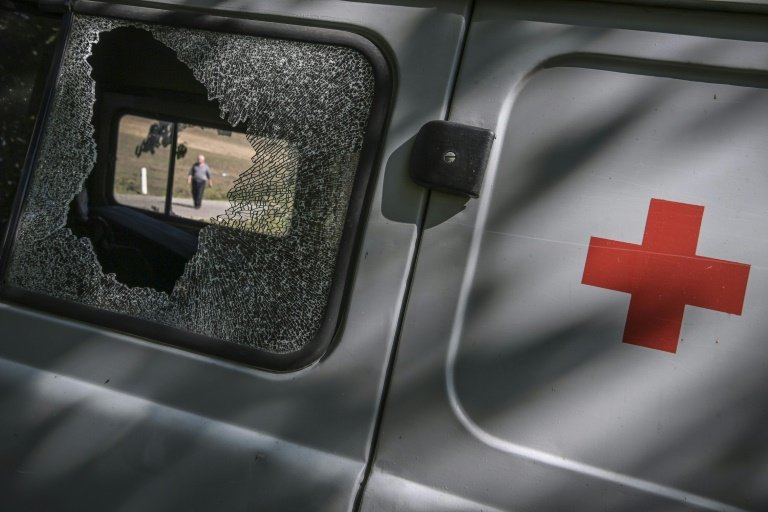 The red mulberry trees meant to conceal them were not enough: Azerbaijani night-time drone strikes destroyed seven artillery guns in a field in Karmir Shuka, in southeast Nagorno Karabakh.

Armenian separatists had towed the guns down off the road, around 20 or 10 metres (yards) from each other, hooked up to trucks, their barrels down, out of firing position.

But the pinpoint strikes at 2:00 am on Friday picked them off.

"We were not in an offensive action," said Onik Mnatsakanian, a major with the Armenian army deployed in the self-proclaimed republic of Nagorno Karabakh.

"We were deployed and waiting, but we were attacked," he told AFP journalists.

The Azerbaijani strikes, powerful and accurate, reduced the trucks to piles of scrap metal.

Everything around the vehicles in a five-metre radius was incinerated, but no one was killed or even injured -- because they quickly got their soldiers out of harm's way when they heard the approaching drones, said Mnatsakanian.

The surrounding mulberry trees, whose fruits go into a famous local vodka, were reduced to tree stumps and a few charred branches.

And the field, about the size of a football pitch, was scattered with debris from the strikes: bits of blackened metal, twisted or sheared off, pieces of bodywork, a piston here, the remains of seat there, shells intact and in fragments.

There were also the remains of the soldiers' possessions, abandoned when they scrambled to safety: a sandal, the remains of a Kalashnikov rifle bayonet, a tin of food, a khaki cap.

"The enemy uses very accurate Turkish and Israeli drones," said Mnatsakanian. And that made it an unequal fight given the mainly Russian weapons at the disposal of the Armenian fighters, he added.

The village of Karmir Shuka sits about 20 kilometres (12 miles) back from the front line, with roads leading to Martuni and Hadrut, where the fighting has been fierce since the conflict erupted on September 27. 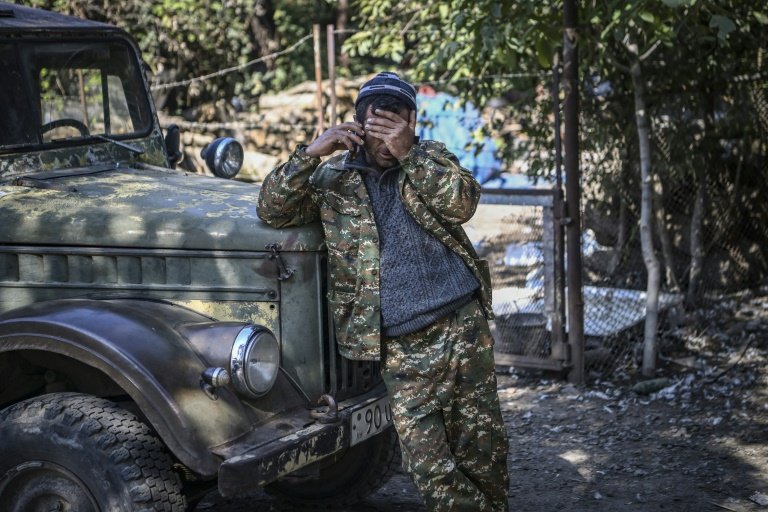 Soldiers walk back from the frontline under a blazing sun / © AFP

At around noon, rumours of another drone in the vicinity began circulating. An officer arrived and quickly ordered two lorries towing artillery that escaped the night-time strikes away from the mulberry grove.

On the road to Hadrut, military lorries, ambulances and 4x4s move as quickly as they can.

Around 50 soldiers in fatigues and carrying their weapons, are trudging back from Hadrut in small groups, heading back to the village to rest after having been relieved.

Their faces are lined with fatigue, the sweat stands out on their brows, they move at a slow pace under the blazing sun.

Down below them, down in the mulberry grove, near the still smoking carcasses of tyres and burning tree branches, a family of pigs rummages through the blackened, churned earth.