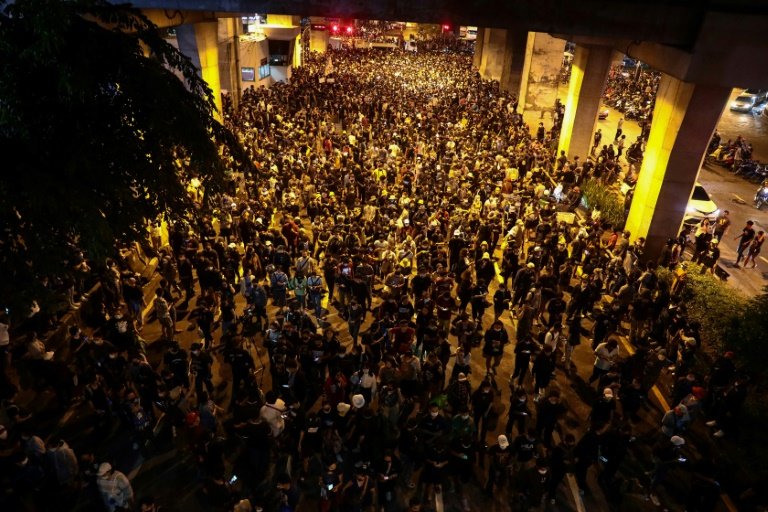 Tens of thousands of Thai pro-democracy protesters rallied across Bangkok Saturday, defying an emergency decree banning gatherings for a third consecutive day to demand the resignation of the prime minister and reform of the powerful monarchy.

Police had used water cannon against peaceful demonstrators on Friday but protestors said they were not cowed by the escalation in tactics.

"I'm concerned for my safety but if I don't come out, I have no future," said business student Min, 18, equipped with a helmet and gas mask as she arrived in Bangkok's northern Lat Phrao district on Saturday, one of several protest venues across the city. 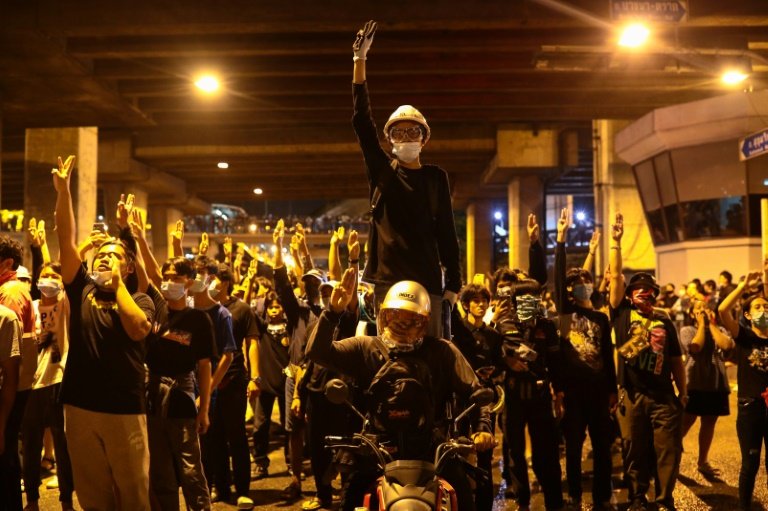 The Bangkok protestors dispersed peacefully Saturday evening and there was no intervention by police, unlike the previous day's use of water cannon / © AFP

Flooding a massive intersection, protestors raised a three-finger salute adopted from the dystopian "Hunger Games" films as passing vehicles honked in support and flashed a thumbs-up at the mostly black-clad protesters.

Across the Chao Phraya river, thousands rallied in the western Wongwian Yai district chanting "Long live the people, down with dictatorship!", while in southeastern Udomsuk protesters brought busy traffic to a standstill.

Carrying signs saying "Stop hurting people," protesters in the three locales numbered in the tens of thousands at the peak, according to AFP reporters on the scene.

For the mostly-young protesters, Friday's Bangkok crackdown was a big learning curve, said Aim, whose friends were blasted with stinging liquid when police fired water cannon. 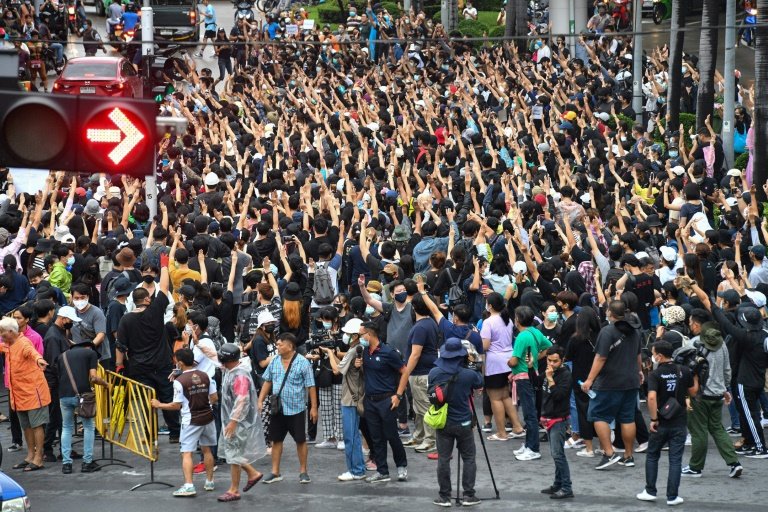 "We had no armour, just umbrellas," said the 25-year-old public servant, grasping a pair of goggles.

But unlike the previous day, police did not intervene and the protestors dispersed by 8:00pm as instructed by organisers, who vowed to "reunite again" Sunday.

Prime Minister Prayut Chan-O-Cha announced Friday an emergency decree banning gatherings of more than four people would be imposed for at least a month.

The former army chief, who masterminded a coup in 2014 before being voted into power last year in an election protesters say was rigged in his favour, also rebuffed calls for his resignation.

At least 65 protesters have been arrested since Tuesday, Thai lawyers for Human Rights told AFP Saturday, as authorities escalated a crackdown on months of slowly building unrest. 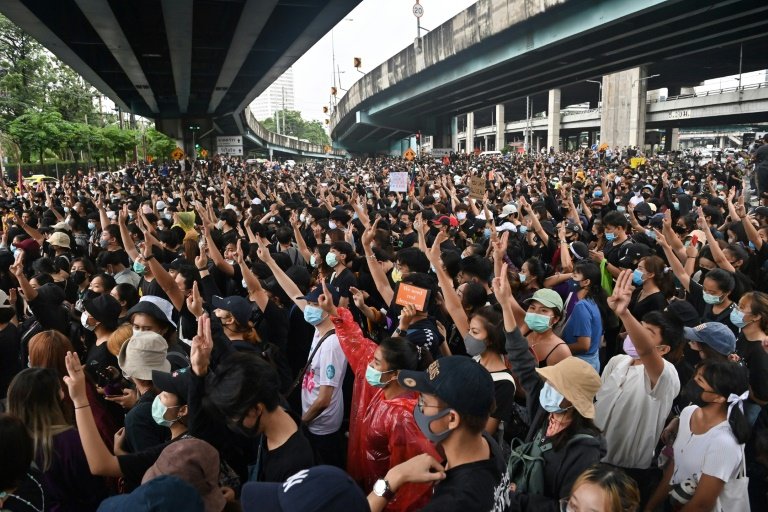 The latest came Saturday night of prominent activist Panupong "Mike" Jadnok, who was arrested by plainclothes police after he left a rally at a Bangkok university.

Two other activists were arrested Friday under a rarely used law banning "violence against the queen" after they joined a group Wednesday that surrounded a royal motorcade carrying Queen Suthida, flashing a pro-democracy salute as the car drove by.

Both men, one of whom was released on bail Saturday, could face life in prison if convicted. 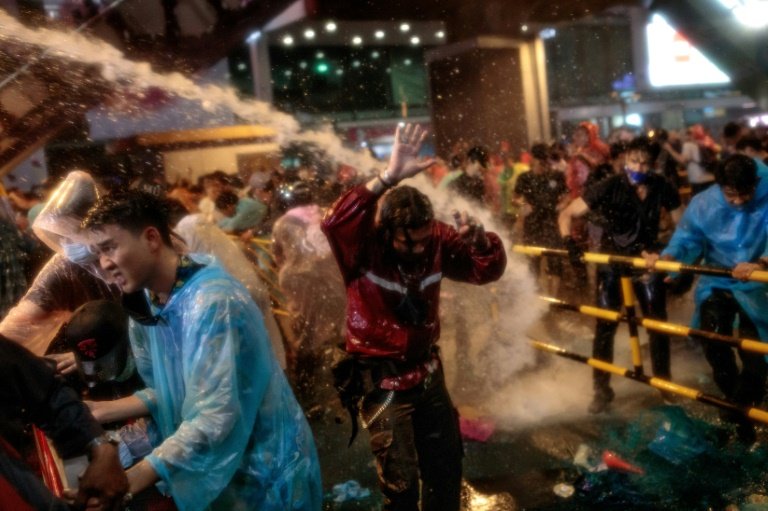 At least 65 prominent protesters have been arrested since Tuesday / © AFP

Activist Tattep "Ford" Ruangprapaikitseree, released Saturday after his detention the night before, took to Facebook to condemn the use of violence against unarmed protesters.

"The government is no longer legitimate. Prayut Chan-O-Cha, you're a tyrant," he said in a livestreamed video.

The government insisted the use of force had been lawful to stop those trying to "create divisions" in the country.

"There was no victory or defeat for either side. It's a defeat for all Thais," government spokesman Anucha Burapanchaisri said in a statement.

The pro-democracy movement is making an unprecedented challenge to the kingdom's powerful monarchy.

Protesters are demanding the abolition of a strict royal defamation law, which carries jail sentences of up to 15 years per charge, and for the monarchy to stay out of politics.

The institution currently wields enormous influence and is flanked by an arch-royalist military and billionaire clans.

Since ascending the throne in 2016, King Maha Vajiralongkorn has taken personal control of the palace's vast fortune -- worth an estimated $60 billion -- and moved two army units under his direct command.

The government insists the reforms to the royal family are off-limits, but this position was becoming untenable, said International Crisis Group analyst Matthew Wheeler.

"The degree of repression necessary to effectively reinstate the prohibition, including online, would tarnish both the government and the monarchy."

The unrest in Thailand garnered worldwide interest, with "Mob October 17" -- referring to the Bangkok protests -- taking the number one hashtag globally on Saturday with almost three million tweets.