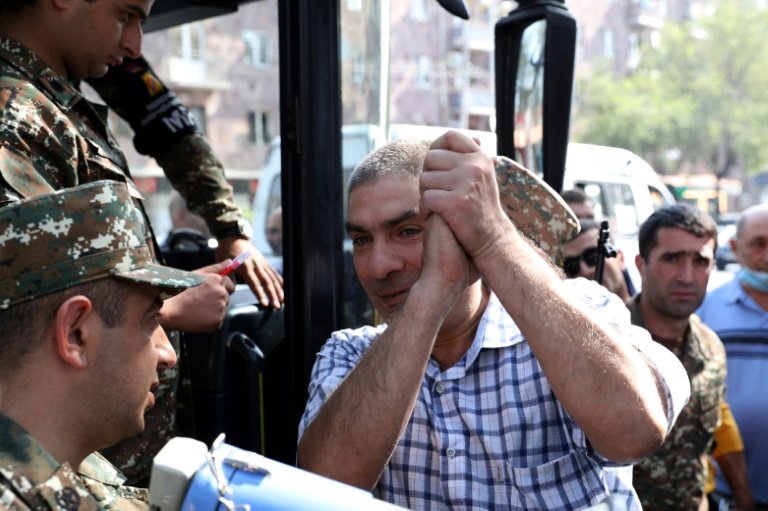 Some of the would-be soldiers say they have been ordered to report, others are volunteers / © PHOTOLURE/AFP

In front of a recruiting office in the Armenian capital, dozens of men -- some already in military fatigues, some chain-smoking -- are milling about, waiting to join a war raging in Nagorny Karabakh.

There is a steady stream of potential new recruits heading to the Soviet-era building on Alabyan Street, in the northwest of the capital, with men arriving on foot and by car.

Some of the would-be soldiers say they have been ordered to report, others are volunteers.

Kamo, a 32-year-old factory worker, said that a lot of people were eager to join the fight after a long-simmering conflict between arch enemies Armenia and Azerbaijan erupted on Sunday.

"We must act to defend our homeland against the aggressor," Kamo, who did not give his last name, told AFP.

"This is our land. We will die before we abandon it," said.

"There are 18-year-olds and even elderly people here. Everyone understands what we are fighting for," he added.

"Of course it's sad that we are sustaining losses. But we aren't afraid." 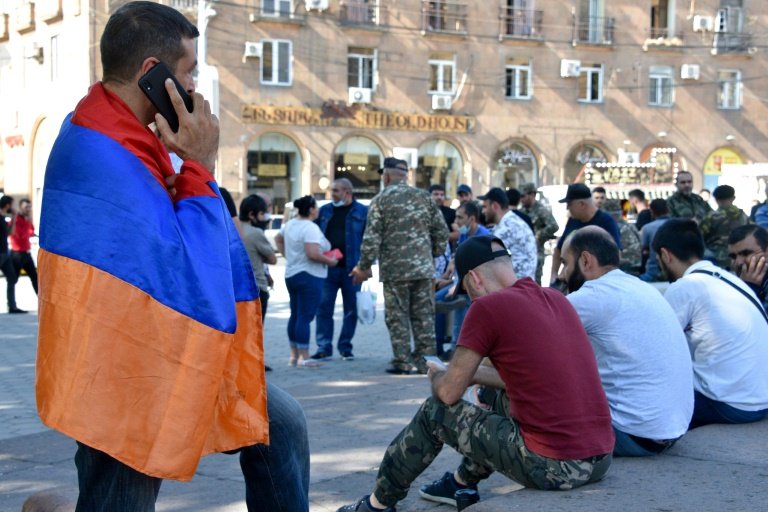 'This is our land. We will die before we abandon it,' said one recruit / © AFP

Since Sunday, Armenian and Azerbaijani forces have been engaged in the heaviest fighting in years over Nagorny Karabakh, an ethnic Armenian region that broke away from Azerbaijan in the 1990s during the collapse of the Soviet Union.

Karabakh's declaration of independence sparked a war in the early 1990s that claimed 30,000 lives.

More than 100 people have been confirmed killed in the latest flare-up and both sides are claiming to have inflicted heavy losses on opposing forces.

Armenia and Azerbaijan have defied international calls for a ceasefire, and Turkey has given full backing to its ally Baku.

Like Azerbaijan, Armenia has declared martial law and military mobilisation.

The Azerbaijani authorities say their forces have made territorial gains, a claim the Karabakh separatist leadership denies.

The dramatic military escalation has spurred large numbers of military-age men in both countries to volunteer to go to the front.

In Yerevan, there are no visible signs of the conflict except for giant flags hanging from some buildings and residents standing in lines to donate blood.

A surge of patriotic sentiment in the city is especially palpable at the recruiting office.

"My cousin is going to war," said Robert Gasparyan, a 20-year-old student.

Gasparyan said he fought in heavy clashes between Armenia and Azerbaijan that broke out in July along the countries' shared border, hundreds of kilometres from Karabakh.

"What's happening now is a hundred times worse compared to what I have seen," said the young man who came to accompany his relative.

The two armies have reported the use of heavy artillery and drones by the opposing side. Armenia has also claimed that a Turkish fighter jet flying in support of Baku's forces downed one of its warplanes, a claim denied by Turkey.

"This is a fight to the death," said one volunteer -- a 63-year-old teacher who declined to give his name.

"We want to defend our homeland and live in peace. That isn't too much to ask."