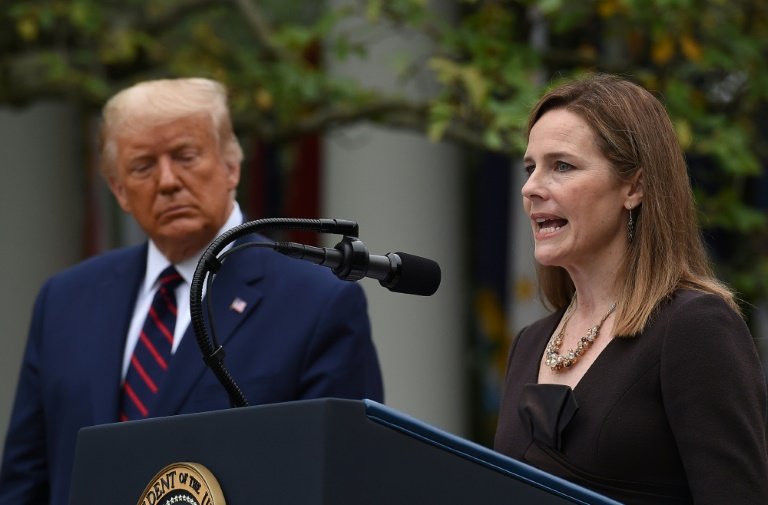 Judge Amy Coney Barrett, who was nominated Saturday to the US Supreme Court, is a darling of conservatives for her religious views but detractors warn her confirmation would shift the nation's top court firmly to the right.

A practising Catholic and the mother of seven children, including two adopted from Haiti and a young son with Down's Syndrome, Barrett is personally opposed to abortion, one of the key issues dominating the cultural divide in the United States.

As a federal appeals court judge since 2017, she has taken positions backing gun rights and against migrants, women seeking abortions and former president Barack Obama's signature healthcare reform that Republicans have been trying to dismantle for years.

At just 48, her lifetime appointment to the bench would ensure a conservative presence on the panel for decades, but her background -- the antithesis of the justice she would replace, Ruth Bader Ginsburg -- is a new flashpoint in an already polarized country.

President Donald Trump announced Barrett's nomination at the White House and predicted a "very quick" confirmation in the Republican-controlled Senate.

After a childhood in New Orleans in the conservative south, Barrett became a top student at Notre Dame law school in Indiana where she later went on to teach for 15 years.

At the beginning of her legal career, she clerked for the renowned conservative Supreme Court justice Antonin Scalia and took up his "originalist" philosophy of understanding the Constitution as it was meant to be read at the time it was written, as opposed to more progressive interpretation.

Praised for her finely honed legal arguments, the university professor nevertheless has limited experience of actually presiding over a courtroom, having only taken to the bench in 2017, after being appointed by Trump as a federal appeals court judge. 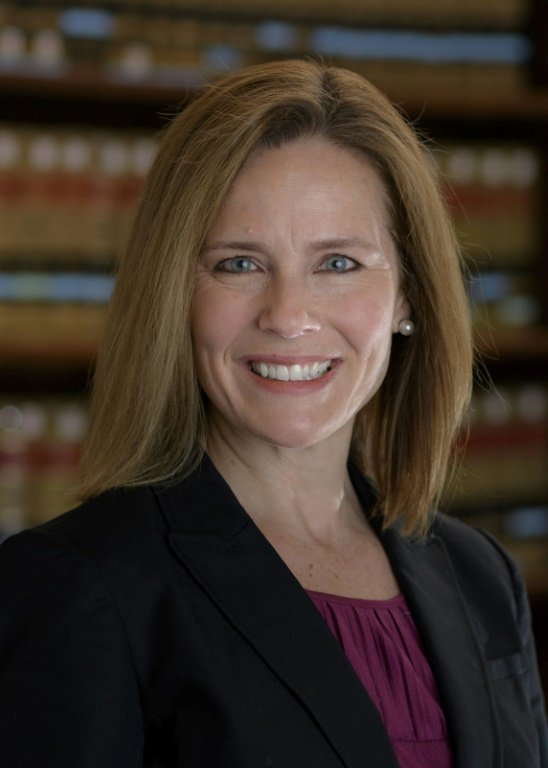 Catholic judge Amy Coney Barrett, who was told by Senator Dianne Feinstein. 'The dogma lives loudly in you' / © University of Notre Dame/AFP/File

At the time, her Senate confirmation process was a stormy affair, with Democratic veteran Dianne Feinstein telling her, "The dogma lives loudly within you."

That statement was used by supporters of Barrett to accuse Feinstein herself of intolerance, and only served to boost her standing among the religious right.

The conservative Judicial Crisis Network went as far as having mugs made with the judge's picture printed on them next to Feinstein's words.

Without losing her composure, Barrett responded that she could make the distinction between her faith and her duties as a judge.

But her critics were not convinced, and often cite the numerous articles she wrote on judicial matters while she was at Notre Dame, and point to her recent rulings as a judge which they say betray her ideological leanings.

In 2018, she was on the shortlist presented by President Trump for a seat freed up by the retirement of Justice Anthony Kennedy, a position ultimately filled by Brett Kavanaugh after a ferocious confirmation battle.

Comments she delivered to students at Notre Dame, are frequently used to reprimand Barrett.

Presenting herself as a "different kind of lawyer," she said that a "legal career is but a means to an end... and that end is building the Kingdom of God."

"A willingness to overturn the Affordable Care Act and to overturn Roe v. Wade," the landmark legislation that legalized abortion in the US.

"This nomination is about taking health care away from 20 million Americans and eliminating protections for Americans with preexisting conditions. Barrett, who has even opposed ensuring access to contraception, would be a bane to reproductive freedom," Goldberg said.

At the same time, conservatives hail a woman they consider "brilliant" and "impressive", with fans online even posting memes of her dressed as Superman.