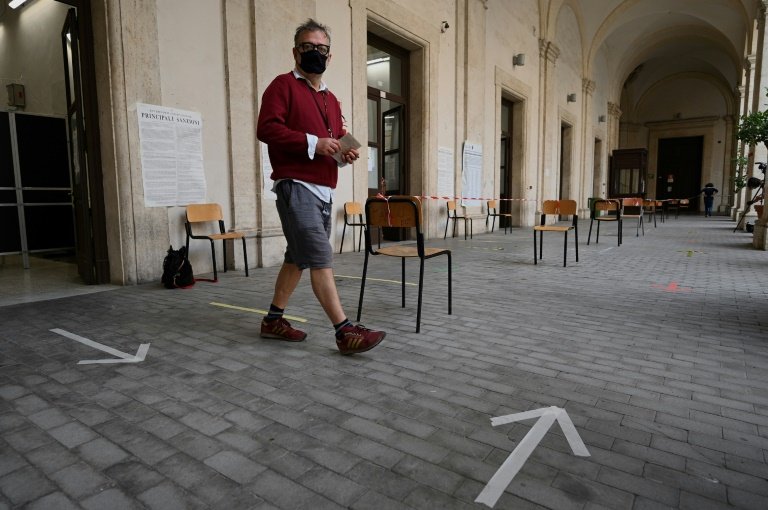 Polling stations opened Sunday for the two-day vote, despite a threatened resurgence of the coronavirus in Italy / © AFP

Italians vote Monday in elections that could see the far-right take the historic left-wing bastion of Tuscany, one of several regions up for grabs in a ballot that could weaken an already fragile government.

Polling stations opened Sunday for the two-day vote, despite a threatened resurgence of the coronavirus in Italy, which was the first in Europe to go into lockdown and is now registering over 1,500 new cases daily.

Ballots are being cast nationwide for a referendum on cutting parliament numbers, but all eyes are on elections held at the same time in seven regions: Campania, Liguria, Marche, Puglia, Tuscany, Valle d'Aosta and Veneto.

The high-profile battle is for Tuscany, which has been ruled by the left for 50 years, but may soon be swapping the socialists for far-right leader Matteo Salvini's League party.

"It's all to play for. The left has underestimated this campaign. It thought it had it in the bag, and that Tuscans would never look to the future," Salvini told a rally near the Leaning Tower of Pisa as he closed his campaign.

The left is expected to hold Campania in the south, but the coalition of Salvini's League, Giorgia Meloni's far-right Brothers of Italy and Silvio Berlusconi's centre-right Forza Italy may well snatch neighbour Puglia.

And the right is set to win easily in its strongholds of Veneto and Liguria, as well as taking the Marche.

Such sweeping victories could further fracture the brittle relationship between the centre-left Democratic Party (PD) and its ruling partner, the anti-establishment Five Star Movement (M5S).

And it would bolster the right's claim that the uneasy coalition -- not elected, but installed after the previous government collapsed -- is politically weak, and Italy's president should bring forward the 2023 national election.

The last polls to be published showed a tight race.

MEP Susanna Ceccardi, who has adopted Salvini's "Italians first" mantra, held 41.5 percent of voter intentions, compared to 43.7 percent for rival Eugenio Giani from the PD, according to polling firm YouTrend.

The PD only narrowly frustrated a League bid in January to take Emilia Romagna, one of its biggest strongholds.

Ceccardi, 33, was until recently known only to the inhabitants of Casina, a porticoed town near Pisa, which was the first to turn to the League when she was elected mayor four years ago.

Since then, Renaissance art cities from Pisa to Siena have flipped to the right.

"In 2000, a frustrated Berlusconi even launched a campaign to 'de-Tuscanise Tuscany'. It was a disaster," he said.

"But times have changed. And the left has neglected its own history, its roots, its base," he added.

The region has no glaring problems to drive a protest vote -- the health system has performed well under Covid-19, immigrants are well integrated, quality of life is high, Palumbo says.

But it is not immune to being swayed by national or international trends, he said, such as the lure of populism.

Ceccardi, who has a one-year old daughter, smiles down from buses and billboards. In sleek television campaign adverts she has urged Tuscans to "choose change".

Giani, 61, does not have Salvini's famed communications team -- dubbed "the Beast" -- behind him.

Among his pre-vote efforts, the Stampa daily pointed out, was a Facebook photo of him stroking a cow.

"But Giani has spent the last few years as a regional politician going round every single little town, door to door.

"He knows everyone, and that could help him".