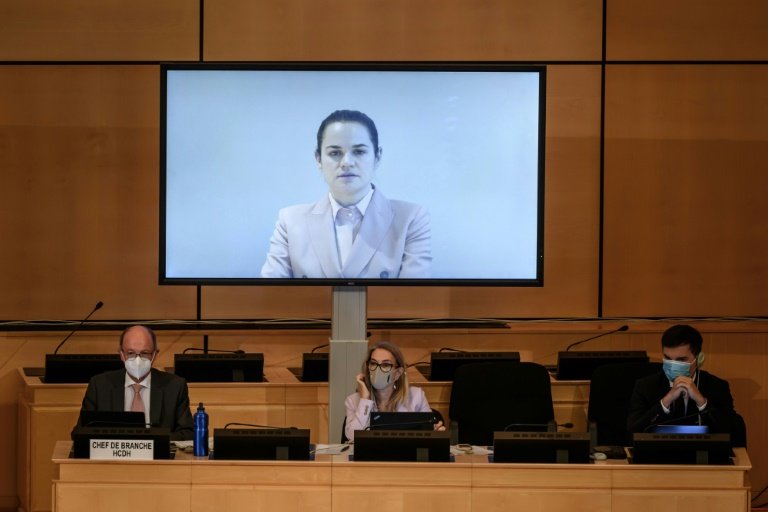 Belarus and several allies tried Friday to block a video message from opposition leader Svetlana Tikhanovskaya at the UN Human Rights Council, where she urged "the strongest" international response to Minsk's abuses.

Tikhanovskaya demanded "immediate international attention" for her country as it reels from a brutal crackdown on protests over the disputed re-election of President Alexander Lukashenko.

But her short video message, in a rare urgent debate at the council, had barely begun before Belarus Ambassador Yuri Ambrazevich demanded it be switched off.

He repeatedly interrupted the screening, raising procedural objections and insisting her words had "no relevance on the substance... on the events that are taking place today."

He was overruled by council president Elisabeth Tichy-Fisslberger.

The debate on the rights situation in Belarus, requested by the European Union, focused on violations and the crackdown on the unprecedented demonstrations which broke out after disputed August 9 elections.

Lukashenko, who has ruled the ex-Soviet state for 26 years, claimed to have defeated Tikhanovskaya with 80 percent of the vote.

The leader, who on Thursday warned of a possible "war" with some neighbouring countries, has refused to step down and has turned to Russia for support. 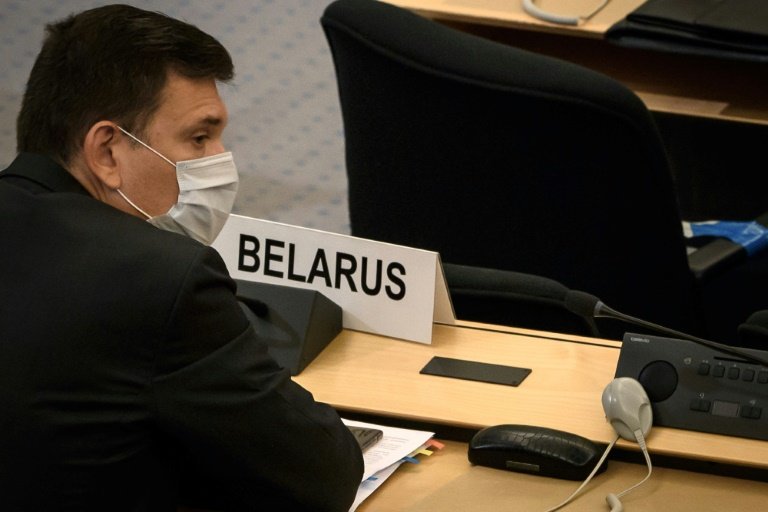 His security forces have meanwhile detained thousands of protesters, many of whom have accused police of beatings and torture. Several people have died.

Tikhanovskaya, who has taken shelter in neighbouring Lithuania, insisted that the country's violation of its international obligations to respect "human dignity and basic human rights... means the international community has a right to react in strongest terms."

"The scope and the brutality of the extensive force used by the regime is in clear violation of all international norms," she said.

"We have witnessed a brutal crackdown on peaceful protests," said German ambassador Michael Freiherr von Ungern-Sternberg on behalf of the EU.

He raised concerns at "reports of attacks on -- and torture and cruel, inhumane or degrading treatment of -- peaceful protesters as well as harassment, intimidation and detentions of opposition leaders."

Minsk's envoy Ambrazevich meanwhile slammed the "lopsided picture of reality presented by the losers in the election," rejecting allegations of abuse by authorities.

He insisted that protesters had been violent and had injured numerous police officers.

Ambrazevich and his counterparts from Russia, Venezuela and China also voiced multiple objections to statements by the UN deputy rights chief Nada Al-Nashif and Anais Marin, the UN special rapporteur on the rights situation in Belarus, saying they had no place in the debate.

Marin told the council that more than 10,000 people had been "abusively arrested for taking part in peaceful protests", and lamented that "over 500 cases of torture, committed by state agents, have been reported to us."

"I have been informed of allegations of rape, electrocution, and other forms of physical and psychological torture," she told the council via video link, adding that the perpetrators appeared to be acting with "impunity".

Friday's debate ended with a vote approving a resolution submitted by the EU insisting that the vast array of serious abuses urgently require "independent investigation."

The voting process was slowed down by Russia, which proposed 17 amendments to the text, all of which were rejected, and in the end the resolution was adopted unchanged by the 47-member council, with 23 in favour, 22 abstentions and only Venezuela and Eritrea voting against.

The text calls on Belarusian authorities to "enable independent, transparent and impartial investigations into all allegations of human rights violations in the context of the election."

It also calls on Minsk to "guarantee access to justice and redress for victims as well as full accountability of the perpetrators."

And it calls on the office of UN rights chief Michelle Bachelet to closely monitor the situation in the country and to present her conclusions in a report during the next council session in March 2021.

The discussions mark only the sixth time in the council's 14-year history that it has agreed to hold an "urgent debate" -- a special debate within a regular session of the council.

During its last session in June, the council held an urgent debate on racism and police brutality following unrest in the United States and beyond over George Floyd's death.