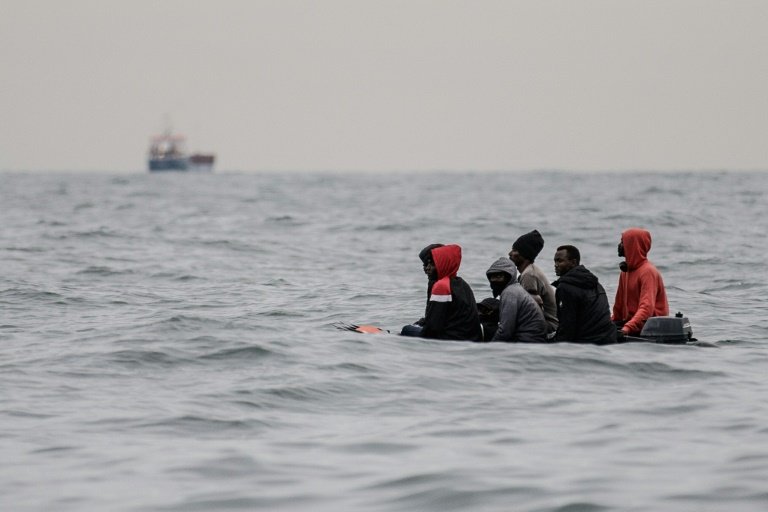 For three weeks, two AFP teams followed two migrants -- from Kuwait and Iraq -- in their bid to cross the Channel to Britain / © AFP

Britain! After years trekking through countless countries, weeks in a filthy camp on the French coast, seven gruelling hours on a small boat tossed about by the Channel, Walid has finally made it.

He's managed to cross the so-called death route. His friend Falah, though, is still waiting.

For three weeks, two AFP teams followed Walid, a Kuwaiti, Falah, an Iraqi and his two daughters, nine-year-old Arwa and 13-year-old Rawane, who is severely diabetic, from the town of Grande-Synthe in northern France to Dover in the south of England via the choppy waters of the Channel.

Just 33 kilometres (21 miles) separate the French coast from the white cliffs of Dover, visible on a clear day, but the crossing is one of the world's busiest -- and most dangerous.

Still, more and more people are attempting the risky passage.

Between January 1 and August 31, 6,200 migrants tried their luck, according to French maritime authorities.

Those who have a bit more cash get an inflatable dinghy. Those who don't resort to paddleboards, kayaks or a simple rubber ring.

In August, a 28-year-old drowned while trying to cross on an inflatable dinghy. Last year, four migrants were found dead at sea or on a French beach.

In a wood on the edge of the Grande-Synthe railway line, under a makeshift tarpaulin tent, Walid and Falah are glued to their phone.

It's their holy grail, their only link with the people smuggler who will give them the green light to take to the sea. 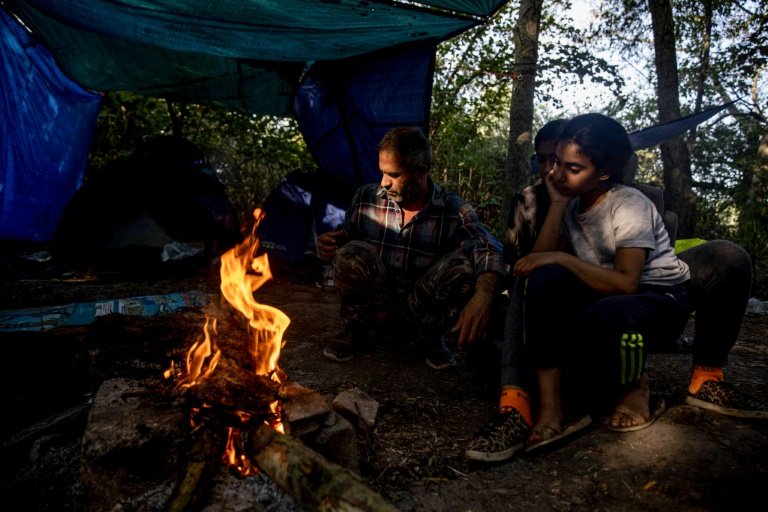 A waiting game: Falah and his daughters await the green light from the people-smuggler at any moment / © AFP

On a WhatsApp call, the silhouette of the smuggler pops up.

They have never met him. These types of criminal networks, often Kurdish or Albanian, use go-betweens to establish contact.

For a month now, Walid has been waiting with Falah and his girls, whom he met in Frankfurt on the migrant route towards a better life -- full of hope.

"Even if this journey is nicknamed 'the death route', we want to cross.

"We're heading into the unknown -- there is just God, the water and us. Allah will decide our fate," says Falah.

A reserved man in his fifties, Falah escaped Iraq in 2015 when the Islamic State group was in full expansion, joining hundreds of thousands of others on the road to Europe.

Leaving his wife behind -- a matter he refused to dwell on -- he travelled on foot from Karbala in Iraq to Germany, which in 2015 decided to welcome close to 900,000 migrants before closing its borders, via Turkey, Greece, Macedonia and Croatia, among others. 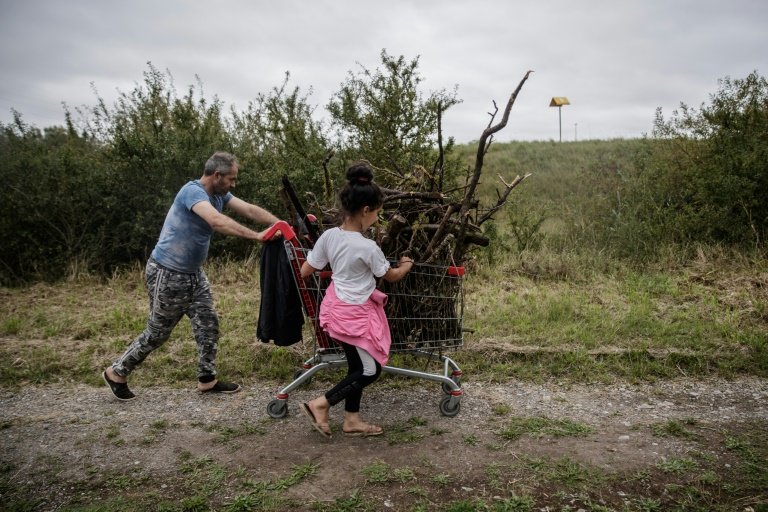 Falah, from Iraq, says he's not "asking for the moon", just a decent life where his daughters can feel free and safe / © AFP

In Germany for two years, he felt he'd found a host country. But his requests for asylum failed, so he set off again.

Falah, his dark hair streaked with grey, said he's not "asking for the moon."

"I just want to live decently, I want my daughters to feel free and safe."

Walid, meanwhile, is a "Bidoon", a stateless tribesman.

These have no passport, and Kuwait won't recognise them as citizens or foreign nationals which means they have no political, social or economic rights.

He passed through Greece among other countries where he left his fingerprints as part of the so-called Dublin Regulation that states the first EU country where asylum seekers arrive must deal with their applications.

He's disappointed in the European Union, which he says "doesn't give you anything and ends up evicting you."

"The hardest thing is not knowing when you're leaving," he says.

"Before this, I had never stayed more than five days in the same place. But here, we don't know if it's tomorrow, in two days or in two months."

The conditions need to be just right -- a clear sky, a calm sea and a lack of police patrols.

And they're not alone. Dozens of migrants are waiting around in filthy conditions. 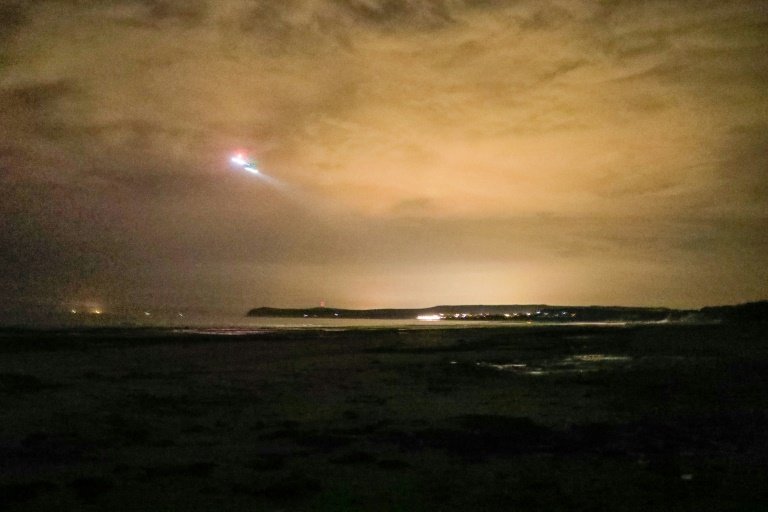 Conditions need to be just right -- a clear sky, a calm sea and no police patrols / © AFP

Four years after the sprawling "Jungle" camp was dismantled in Calais, some 30 km west, Eritreans, Iranians, Afghans and Syrians continue to flock to the coast, hoping to get to England.

Those who manage are quickly replaced by others who arrive, despite the regular dismantlement of makeshift camps.

As the wasps buzz angrily around, the four kill time, sleeping little and badly as the strident noise of the trains keeps waking them up.

They've managed to find one burnt pan and another left by previous occupants, allowing them to make food. They use empty yoghurt pots as glasses, and sit on bits of cardboard.

Every day, Falah goes out of his way to find ice cubes to preserve his daughter's insulin, which he keeps stocked up via private donations and contacts, he says.

When it's good weather, they go and wash in the nearby canal, and clean their clothes in the murky water.

They collect wood for their fire and meals from charity distributions a kilometre away.

Dejection is no stranger -- Falah has at times broken into tears. 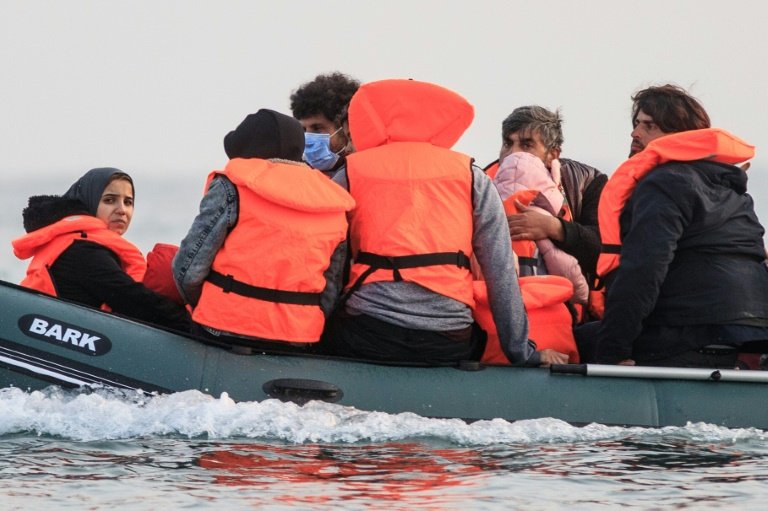 "Every night, you have to be ready to leave everything behind. Otherwise, the boat doesn't wait. For two days, we even slept with our shoes on," says Walid.

He has already tried -- and failed -- to cross three times.

The first and third times, there were too many police patrols.

"The second, we got to the beach. After waiting for five hours, we carried and blew up the boat but at the last minute, we noticed the inflatable dinghy was torn and the smuggler asked us to get off," he says, dragging on his cigarette.

Weary and impatient, he doesn't trust their smuggler anymore, whom he believes is ripping them off.

On Thursday, September 10 -- one month and 13 days after he arrived in Grande-Synthe -- warm sunshine and a light wind revive Walid's hopes.

His smuggler confirms that the crossing is imminent.

"We don't know until what time we're going to wait before setting off," Walid says, as he goes to the meeting point.

Several kilometres away, Falah, who has changed camp, is also ready to depart.

Hastily, he shoves his daughter's medicine in a case and some croissants in a bag.

"I'm scared to believe it because in over a month, I've only seen the sea once," he says.

In England, "everything will be easier," he believes.

"I'll be able to work with my skills, in the food service or car industry."

The Channel waters are calm, the sky is clear. Police are patrolling the coast, and the beams of their flashlights scour the sandy dunes.

Hidden in a forest behind the beach, speaking in whispers, the group waits for an opportunity. 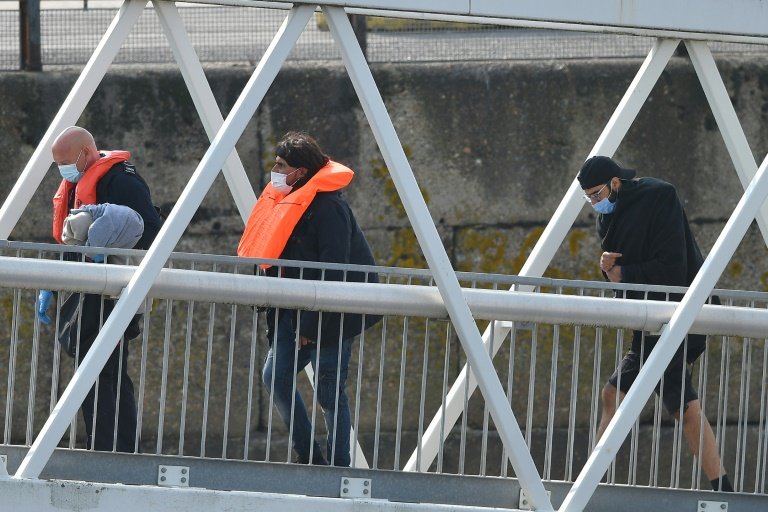 Twice, a police patrol emerges and seizes a boat. It's immediately replaced by the smugglers who are determined to earn more than 40,000 euros per vessel, Walid explains.

The night passes and it's close to 7:00 am when three inflatable boats are hastily put on the water, as the sun rises timidly.

Walid's group goes first. The AFP team follows nearby in a boat.

Propelled by a weak engine, the boat slowly heads northwest.

On board are 14 people including women, a baby and children, all wearing bright orange life jackets.

Their only fear is to break down in French waters, which would bring them back to square one.

Two hours after setting off, the Themis, a French patrol vessel, comes level with the dinghy.

It sends the rubber boat's position to surveillance units on either side of the Channel, but doesn't intervene at sea -- too risky, unless there is a problem.

"As soon as we're at sea, the priority is no longer to stop the crossing but to ensure we safeguard human lives" in an area where 25 percent of the world's sea traffic transits, French maritime authorities tell AFP.

And the smugglers know that.

So it is, that Walid and his companions continue their journey.

The engine stalls, and then restarts. The border is just a few kilometres away. 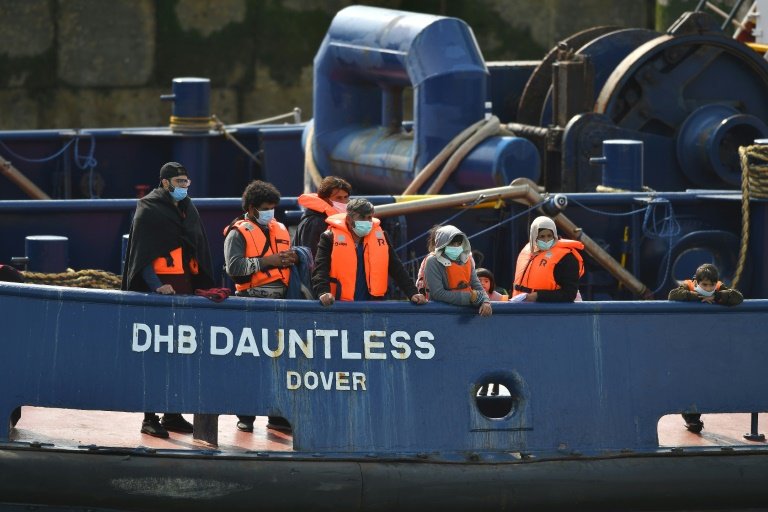 On arrival in Dover, months of administrative procedures await for Walid / © AFP

It's now 10:00 am, and a red shape emerges in the distance. It's a lightship -- a ship that acts as a lighthouse and marks the start of British waters.

Walid is ecstatic, drained, emotional. Suddenly, he chucks his mobile phone in the water to erase all trace of his past, his neighbours throw their arms to the sky and shout.

Soon, the British coastguards arrive to tow them to the port of Dover.

After a seven-hour crossing, the passengers set foot on British soil under hazy skies, like dozens of other migrants that day.

Walid, wearing jeans, a dark jacket and a white mask, crams a few clothes into his small backpack.

He is soon escorted into a bus to an immigration processing centre in Dover.

There, by law, people can officially ask for asylum before being taken to a shelter. Months of administrative procedures await.

But Walid is determined to earn a living, now that he is in Britain.

On the other side of the Channel, Falah is distraught. His group never attempted the crossing.

Father and daughters are still waiting.