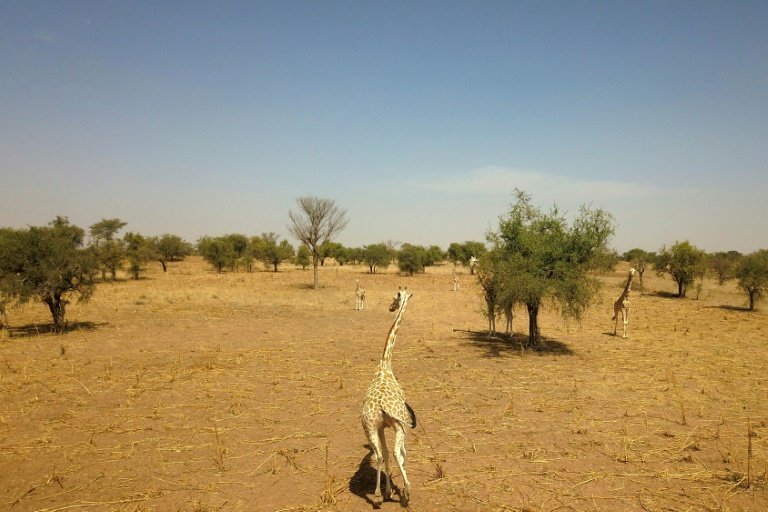 A brutal attack at the Koure Giraffe Reserve has brought put a conservation success story in doubt, and the fall-out could be long-lasting / © AFP/File

One of the most famous animal sanctuaries in the Sahel faces a troubled future after suspected jihadists murdered eight people, six of them young French aid workers.

The Koure Giraffe Reserve, located 60 kilometres (35 miles) southeast of Niger's capital Niamey, is a rare success story for conservation on the vast hard-scrabble rim of the Sahara.

It is a haven for the West African giraffe, a species that once roamed from Lake Chad to Senegal but whose numbers catastrophically declined, surviving in pockets, as its habitat was destroyed.

According to Niger's environment ministry, the reserve had 50 giraffes in 1996 -- a tally that rose to 664 in 2019, thanks in large part to income from European tourists.

But that sunny picture has now been darkly clouded after the August 9 attack, in which six French humanitarian workers based in Niamey were slaughtered at the park along with their Nigerien guide and driver. 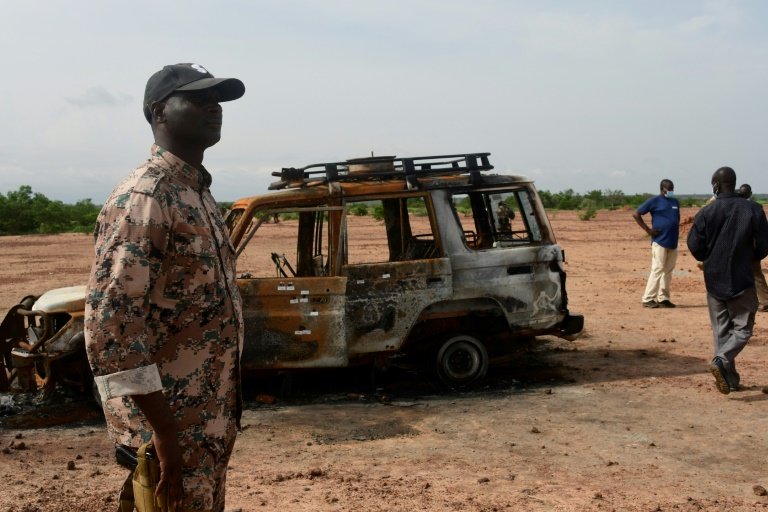 "What's the future for the park?" asked Aicha Ide, who lives in the adjoining village of Kanare.

"We are deeply saddened by the deaths... we are all brothers, because we live thanks to the giraffes," said Ousseini Idrissa, one 11 guides who are now out of work.

"If the white peoples stop coming to see the giraffes, our families will also suffer, because the giraffes are our only means of survival."

One of the poorest countries in the world, Niger is facing a double jihadist threat -- from insurgents coming from Mali in the west and Nigeria in the south.

After the August 9 massacre, the government closed the park and France, Niger's former colonial power, placed the site in its so-called red zone -- a move that says it is not advised for French nationals.

The 842-square-kilometre (325-square-mile) park, traversed by a highway, lies in a semi-desert region where shrubs grow in stoney soil. 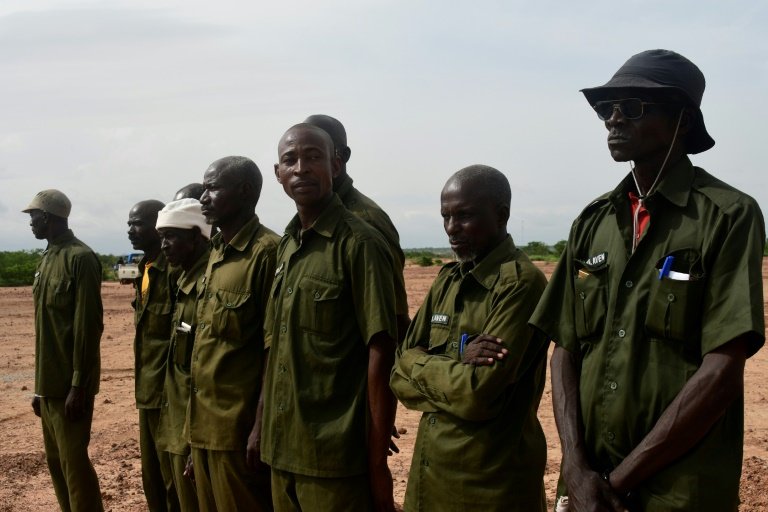 International NGOs have been financing projects to help local people diversify their income, making them less dependent on growing crops that can become a giraffe's lunch.

"If the closure lasts for long, this presupposes that all activities in the park will be stopped, including development projects, which are costing millions in funding, to help villagers," said Omer Dovi, of the Association to Safeguard Giraffes in Niger.

The list of benefits for neighbouring villages is long, including pharmacies, schools, mills to grind grain, seeds and fertilisers, as well as no-interest loans to women to help them set up a small business.

"This water pump has been financed by an NGO which protects giraffes," said Assa Issa, a villager clustered among fellow women who had come to fetch water.

"If the park no longer operates we will be the big losers," she said.

The park has been a huge success in conservation terms. As giraffe numbers rose, the authorities in 2018 transferred seven females and three males to the Gadabedji park in central Niger, 600 kms away, to help prevent overpopulation.

Sani Ayouba, of the Young Volunteers for the Environment, said he fears the attack will bring about "the end of all the activities which help keep the giraffes in this reserve".

He suggested that the park needed more trained rangers, "like parks in other countries". 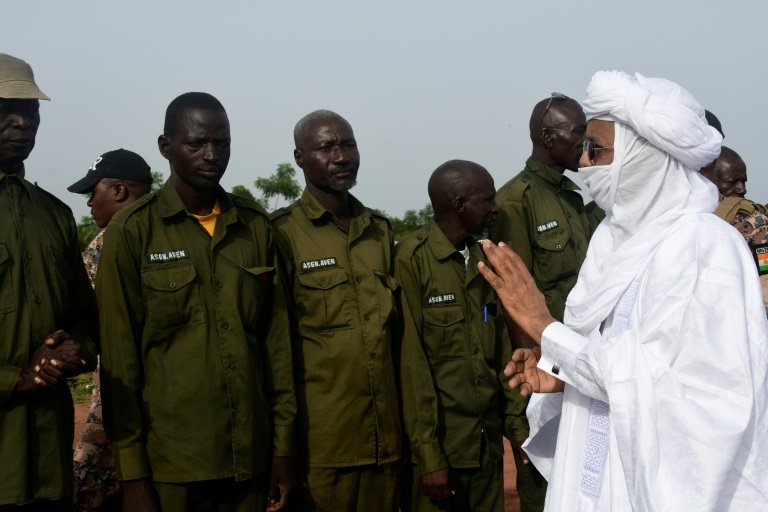 Guides such as Idrissa rely on the presence of military and security forces in the area.

"There is no miracle to bring back the white people: drastic security measures must be imposed on the entire site," Idrissa said.

Prime Minister Brigi Rafini visited the park after the attack, vowing more security and that the government would "take all actions to help recreate hope in Koure".

Ramatou Issa, a fruit vendor near the entrance to the reserve, said "the government must set up a military base here immediately!"

"If the area is abandoned, it will become a den of bandits."

Heavily armed military patrols have combed the reserve since the attack, and residents have been told to report any suspicious activity to the authorities. 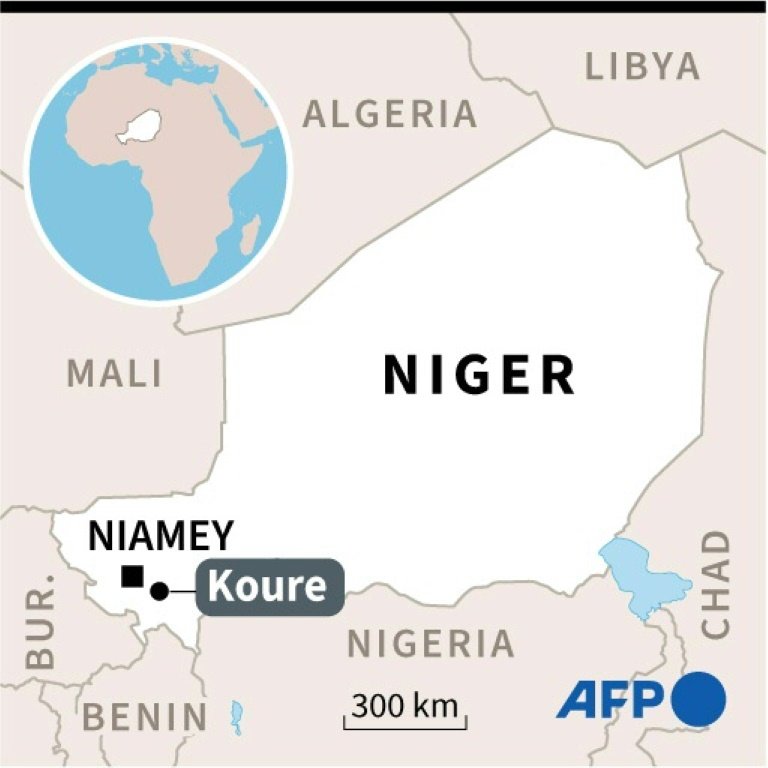 A map of Niger locating the Koure reserve / © AFP/File

The giraffes are also at risk, according to an expert speaking on condition of anonymity.

"Everything must be done to keep the giraffes in Koure -- if they permanently migrate to conflict zones, the species will go extinct," the expert said.

"If the locals no longer benefit from the presence of giraffes, then they will attack one giraffe, then two, then three..."