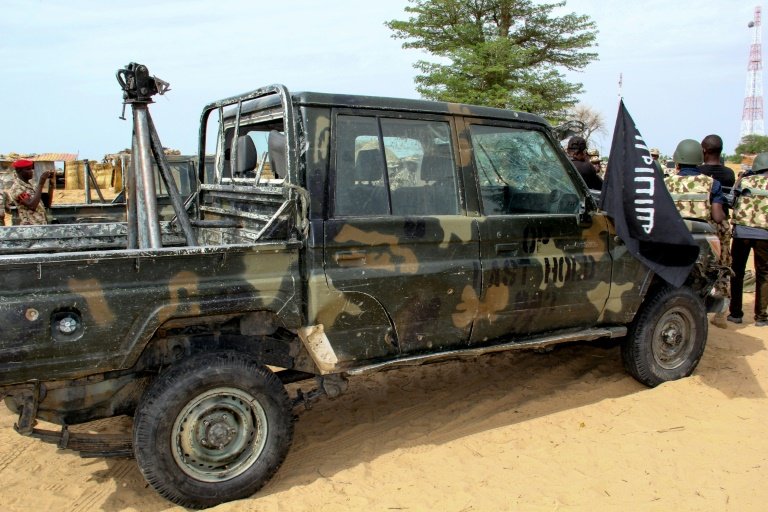 Security experts say ISWAP, a splinter group of Boko Haram, is extending its grip and influence around Lake Chad / © AFP/File

Jihadists have taken hundreds of hostages in a northeast Nigerian town where people had just returned after fleeing their homes, locals and militia sources said Wednesday.

They seized those who had returned to the town in a government operation on August 2 after spending nearly two years in displacement camps, said local militia head Babakura Kolo.

"The terrorists attacked the town in 22 trucks around four pm (1600 GMT) yesterday and engaged soldiers guarding the town in a fierce battle," he said.

Kukawa's residents had returned to their homes just 16 days earlier under military escort, on the orders of the Borno state authorities.

They had been living in camps in the regional capital Maiduguri, 180 kilometres (120 miles) away, where they fled following a bloody attack in November 2018.

A local chief who accompanied the residents to the town said the people had returned with the hope of working on their farmlands "only to end up in the hands of the insurgents".

"We don't know what they would do to them but I hope they don't harm them," said the chief, who asked not to be identified for safety reasons.

A security source who confirmed the incident to AFP said fighter jets were deployed from Maiduguri on Wednesday to "tackle the situation", without giving details.

"Kukawa is of limited value in itself, but the border region of Baga -- on the shores of Lake Chad -- is an important transition zone to Chad and Cameroon, and its control is important to ISWAP... for tactical and economic reasons," he said.

The decade-long jihadist conflict in northeastern Nigeria has forced around two million people from their homes, mostly in the northern part of Borno.

Many have moved into squalid displacement camps in Maiduguri and rely on handouts from international charities.

In the last two years, local authorities have been encouraging the displaced to return home, despite concern by international charities that this is not safe.

Residents have been returned to five major towns since 2018, where they are confined under military protection with trenches dug to try to fend off jihadist raids.

Despite the fortifications, the insurgents have continued to launch attacks.

In a related development, an AFP reporter who visited the town of Magumeri, 50 kilometres outside Maiduguri, on Wednesday saw hundreds flee to escape extortion by ISWAP.

The Islamists had on Tuesday mounted roadblocks in the town, seizing mobile phones, money and footwear.

The extortion followed clashes between Nigerian troops and the jihadists in the town on Monday in which the insurgents lost men and vehicles.

The troops had mobilised from the nearby town of Gubio when residents alerted them of the invasion of Magumeri by the militants, leading to a gunfight.

ISWAP released a statement on Tuesday taking responsibility for the attack on the military, saying it had killed and wounded an unidentified number of people and burnt Red Cross buildings.

The local authority building in the town and a telecom mast were also burnt in the clashes. 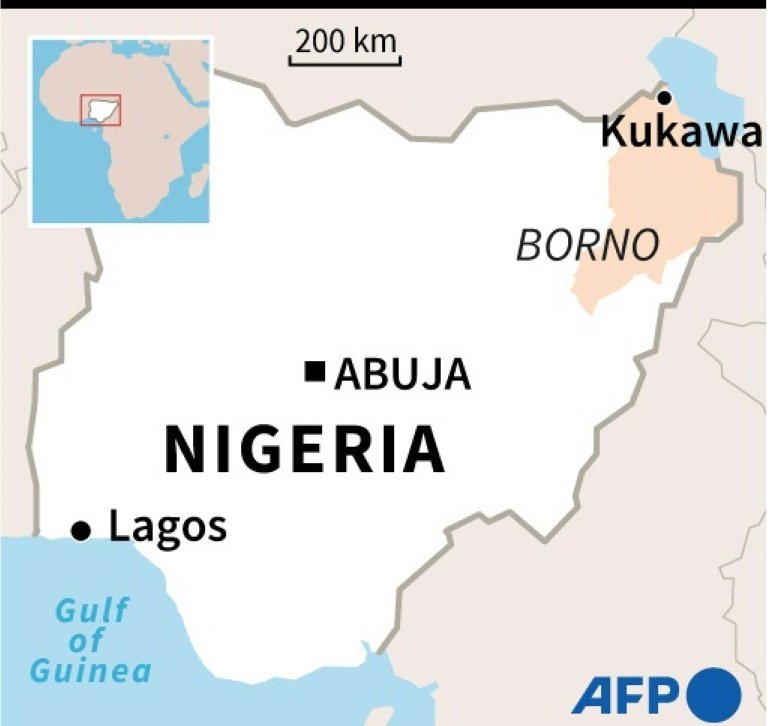 ISWAP on Wednesday claimed on Twitter that its fighters had targeted the Super Camp in Mallam Fatori with five mortar shells.

That claim could not be independently verified.

Security experts say ISWAP -- a splinter group of Boko Haram, which began its jihadist campaign a decade ago -- is extending its grip and influence around Lake Chad, a vast, marshy area also shared by Niger and Chad.

"Under the banner of (ISWAP), insurgents have increasingly focused on a 'hearts and minds' strategy, setting themselves up as an alternative to the federal and local governments," said London-based Janes Group in its latest report.

Vincent Foucher, a specialist with France's CNRS research institute said on Twitter ISWAP was frustrating efforts to resettle displaced residents in the area.

"Clearly, ISWAP is not keen on authorities trying to resettle communities," he said.

"They are in a complicated situation," he said. "On the one head, they want to look open to the public... but on the other, they are suspicious about spies, people who use their phone to inform the army."

The United Nations last Friday said 10.6 million of the 13 million people in the conflict-ravaged states of Borno, Adamawa and Yobe would need humanitarian assistance this year.

It said the figures represented a 50 percent increase since last year and the highest tally since the beginning of the joint humanitarian response five years ago.