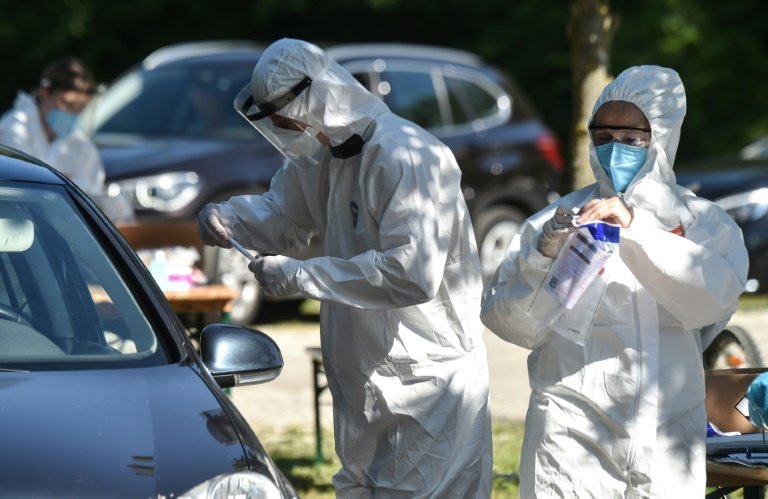 Calls were growing louder in Germany on Monday for mandatory coronavirus tests for travellers returning from high-risk areas, as fears grew over rising case numbers blamed on local outbreaks and summer holidays.

"We must prevent returning travellers from infecting others unnoticed and thus triggering new chains of infection. I will therefore order compulsory testing for travellers from risk areas," Spahn wrote on Twitter.

The regulations will come into force next week, the health ministry tweeted, and tests will be free.

The debate around coronavirus testing intensified over the weekend after Germany's 16 states agreed on Friday for free tests for all returning travellers, but had stopped short of making the tests mandatory.

After a meeting with state officials on Monday, chancellery chief of staff Helge Braun said there was a "great willingness to move closer to such mandatory tests".

"The question of how this can be implemented must now be examined in detail and I believe that we will come to a solution relatively quickly," he said.

"We are preparing everything so that if the federal government gives the go-ahead, we can implement it immediately," he said.

However, the move has also attracted criticism from those who believe too much reliance on tests could lead to complacency.

"One-off tests do not offer any security," Ute Teichert, the head of a national doctors' association, said in an interview with the Funke media group. "On the contrary: They can lead to a false sense of security."

Nevertheless, politicians are planning to ramp up testing in a bid to isolate infections early.

In Bavaria, Soeder said the southern German state will set up coronavirus test sites at its two biggest railway stations as well as key points on motorways.

On top of existing test centres at Bavarian airports, tests will now be offered at the Munich and Nuremberg train stations, as well as on three major motorway routes near the Austrian border.

"We cannot completely prevent corona, so the goal must be to detect it in time to stop it from spreading," Soeder said.

Soeder said Bavaria will also be testing all seasonal agricultural workers in the state, following a mass coronavirus outbreak at a large farm.

Some 500 workers have been sent into quarantine over the outbreak, as at least 174 seasonal farmhands tested positive for the virus on the farm in the municipality of Mamming, most of them from Hungary, Romania, Bulgaria and Ukraine.

Residents of Mamming have been offered free coronavirus tests, with various improvised test centres set up in the area / © AFP

Workers wearing masks could be seen on Monday milling around on the steps of the containers used to house them at the isolated rural site.

Residents in the municipality of Mamming have been offered free coronavirus tests, with various improvised test centres set up in the area.

A woman who gave her name as Brigitte said she was coming to get tested so she could hold her baby grandchild without worrying about spreading the virus.

"I am not overly concerned because the workers were housed very separately," she said. "But I want to be sure."

To curb further outbreaks in farms, Soeder said the state will increase fines for farms that breach regulations to 25,000 euros ($29,400) -- five times the current penalty.

Germany has fared better than many of its neighbours in suppressing the virus, reporting just over 200,000 cases and 9,118 deaths to date, according to the Robert Koch Institute for disease control.

But the country has also been hit by repeated coronavirus outbreaks at slaughterhouses, keeping authorities on high alert.

"From what we have experienced in the last few days, with over 800 cases a day in some cases, we must get back into a situation where we are well below 500," Braun said.