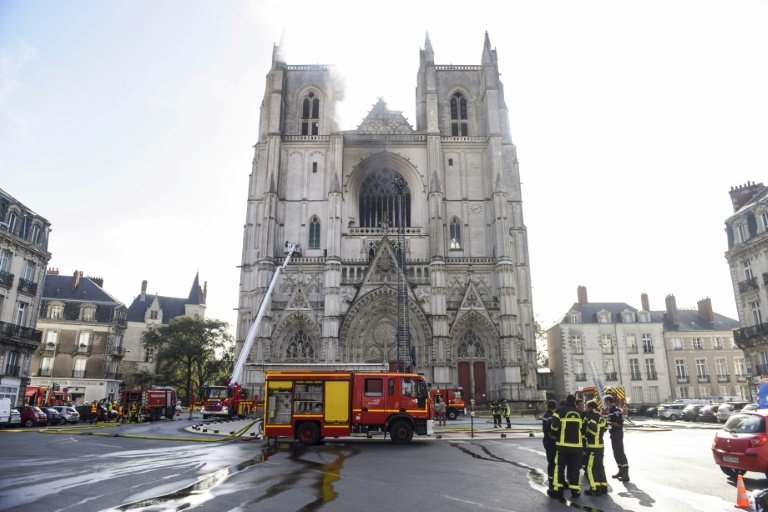 Emergency teams managed to contain the fire at the gothic structure, built between 15th and 19th centuries / © AFP

Fire erupted in the gothic cathedral of Nantes in the western France on Saturday before being brought under control, sparking an arson investigation and leaving Catholic officials lamenting the loss of priceless historical artefacts.

The cathedral's 17th century organ was destroyed and its platform was in danger of collapsing, said regional fire chief Laurent Ferlay, but added the damage was not comparable to last year's devastating blaze at Notre-Dame Cathedral in Paris.

Passers-by saw flames behind the windows of the Cathedral of St Peter and St Paul and alerted the emergency services just before 08:00 am (0600 GMT).

Around 100 firefighters rushed to the scene and managed to control the blaze at the gothic structure, built between 15th and 19th centuries, said Ferlay.

Nantes prosecutor Pierre Sennes noted that the fire had started in three different places, meaning a judicial investigation for possible arson was opened, although no conclusions had yet been drawn.

"When we arrive at a place where a fire has taken place, when you see three separate fire outbreaks, it's a question of common sense, you open an investigation," Sennes told AFP.

Local Catholic official Father François Renaud, who oversees the cathedral, surveyed the damage with firemen on Saturday morning and told AFP the great organ had "completely disappeared", describing it as "an unimaginable loss".

"The console of the choir organ has gone up in smoke along with the adjoining wooden stalls. Original stained glass windows behind the great organ have all shattered," he said. 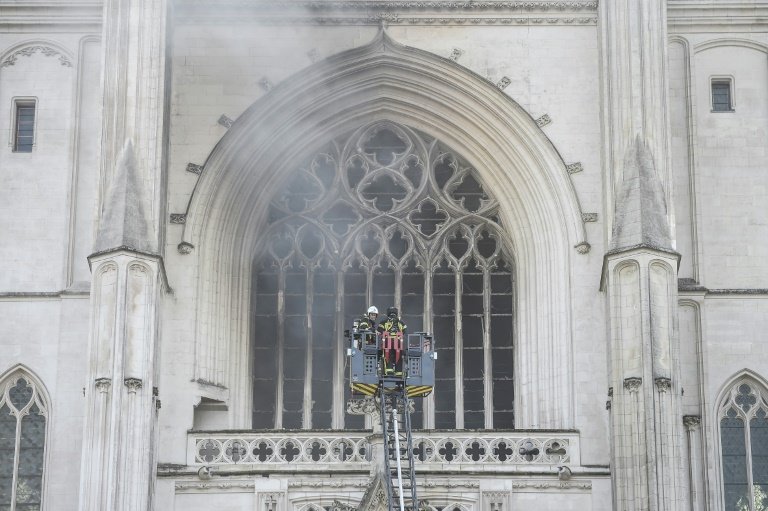 While the blaze was still raging, President Emmanuel Macron tweeted his support for "our firefighters who are taking all the risks to save this gothic jewel".

Prime Minister Jean Castex said he would visit the scene later on Saturday along with other ministers, telling reporters he wanted to know what happened "but first I'm going to show my solidarity with the people of Nantes".

The building was last hit by fire in 1972 and its roof took more than 13 years to repair.

Ferlay played down any comparison with Notre-Dame, which caught fire during repair work in April last year.

Much of Notre-Dame's roof and wooden structure was destroyed, its steeple collapsed and fumes containing toxic molten lead billowed into the air. The structure will take years to repair.

Another religious building in Nantes -- the Basilica of St Donatian and St Rogatian -- was struck by a fire in 2015 that destroyed three-quarters of its roof.

"I would like to stress that following the 1972 fire, the roof was redone with concrete reinforcement," Ferlay said.

He said emergency crews had tried to make sure that works of art inside the building had been protected.

The cathedral's organ was first built in 1621 and has undergone five restorations since -- the latest one ending in 1971.

During the 18th century revolutionary period the authorities had wanted to melt down its pipes for scrap, but the organist intervened and argued that the instrument could instead be used for "revolutionary ceremonies", according to historian Paul Chopelin.