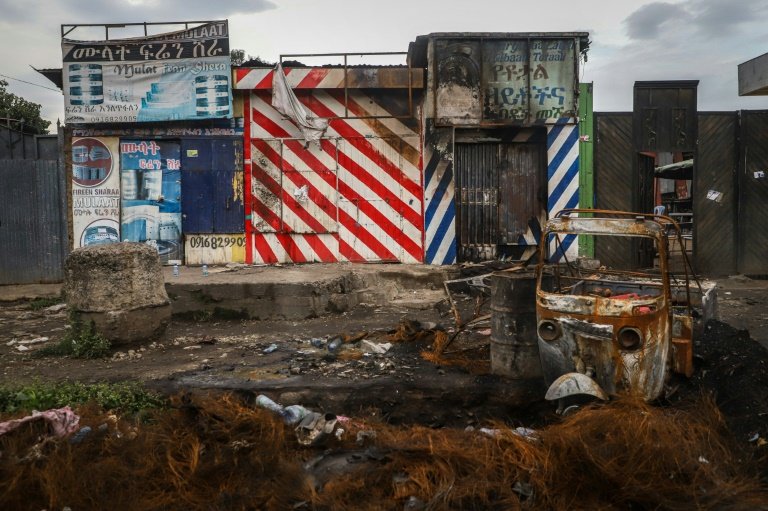 Hundreds of homes, schools, hotels and other businesses owned by non-Oromos were targeted for destruction by mobs / © AFP

Girma had no choice but to watch from afar as a crowd chanting "This is our place!" set fire to the school he founded more than a decade ago.

Though he has lived his whole life in Shashamene, a fast-growing town in Ethiopia's Oromia region, Girma's parents are not members of the country's largest ethnic group, the Oromo, meaning he is often treated as an outsider.

Had he tried to intervene and save his school from the Oromo youths bent on destroying it, he thinks he may well have been killed.

"If you leave them to do whatever they want, they don't touch you. But if you try and save your place and property, they'll come to you," he said, asking to be identified only by his first name.

The unrest that left Girma's school a charred ruin was kicked off by the murder two weeks ago of Hachalu Hundessa, a pop star beloved by Oromos for giving voice to deep-rooted feelings of political and economic marginalisation.

In the days that followed,between 179 and 239 people -- officials have provided conflicting tallies -- were killed because of inter-ethnic violence or the use of lethal force by police and soldiers against demonstrators.

Yet those numbers fail to capture the full devastation in places like Shashamene, where hundreds of homes, schools, hotels and other businesses owned by non-Oromos were targeted for destruction by mobs.

Similar property damage has been reported in towns across Oromia, which surrounds the capital Addis Ababa.

"Our research so far suggests that the property damage has been worse than in previous bouts of unrest," said Laetitia Bader of Human Rights Watch.

To non-Oromo victims, the damage indicates they may no longer be welcome in places they have long called home.

"With the strategy that they're using, to burn the key places... I don't know if they intend for people to come back," said Almaz Morgan Chapman, who lost her hotel in Shashamene to the violence.

Shashamene is best known for its large community of Rastafarians, but the town is also one of the busiest trading hubs in Ethiopia's Rift Valley.

That means there was plenty of high-value property to attack. 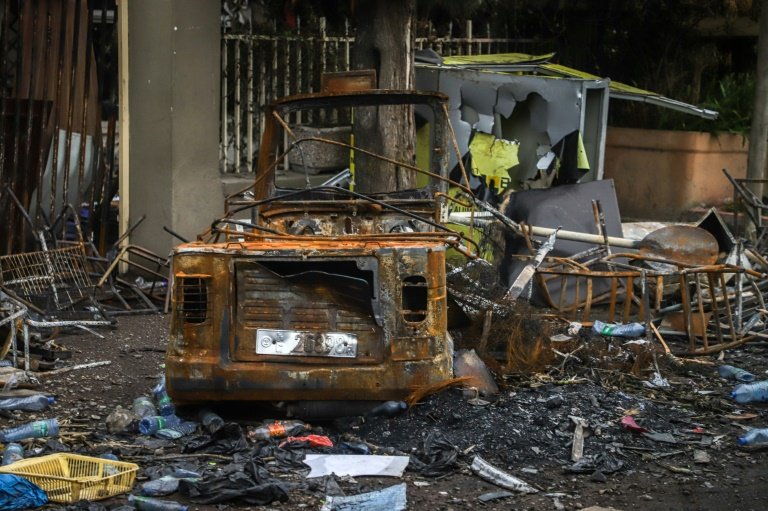 On a main road into town, businesses have been looted and burnt black, their front windows shattered, their walkways covered in twisted scrap metal / © AFP

On a main road into town, businesses have been looted and burnt black, their front windows shattered, their walkways covered in twisted scrap metal.

On the side of a looted insurance company building, someone scrawled the words "OROMO LIVES MATTER".

Yet certain buildings -- a school here, a restaurant there -- remain unscathed, and residents told AFP most of these are owned by Oromos.

Chapman, a native of Trinidad and Tobago who founded her 28-room Lily of the Valley hotel 15 years ago, said a mob set it alight mere hours after Hachalu's death was reported, forcing her to flee the compound while still in her pyjamas.

She noted that a neighbouring hotel owned by an ethnic Amhara was also looted, but a third hotel on the same strip owned by an Oromo went untouched.

"These attacks on property owned by non-Oromos are sadly only the latest bout of intercommunal violence in Ethiopia where political polarisation is often along ethnic lines," said William Davison of International Crisis Group.

It is unclear how many people were killed and injured in Shashamene during the violence.

The government has not provided geographic breakdowns of fatality tallies, nor has it said how many deaths were caused by security forces or inter-ethnic violence.

Some Shashamene victims treated in nearby Hawassa were shot by security forces, while others were hurt with "sticks and stones", which are sometimes used in inter-ethnic attacks, said Dr Zinaw Serniso, CEO of Hawassa Referral Hospital.

Whatever the casualty count, relations between ethnic groups are clearly fraying.

At the height of the violence, young men in Shashamene dragged machetes along cobblestone roads, producing a grating sound intended to intimidate non-Oromos, said one resident, who insisted on anonymity for her safety.

With only native Afaan Oromo speakers feeling comfortable going outside, "it took three days before we started to hear Amharic in the street again," the resident said.

Witnesses stressed that many Oromos stood up for their non-Oromo neighbours, trying to prevent their homes and businesses from being destroyed.

One Oromo resident, who also insisted on anonymity, told AFP he took in an ethnic Gurage family who live next door, adding that he was "embarrassed by what happened" in Shashamene.

"It's very sad as an Ethiopian that I'm alive at this time, thinking about ethnicity when we should be focusing on the worst poverty ever," he said.

"We have nothing and we destroy what we have."

Such shows of solidarity aside, several non-Oromo business owners said they were considering leaving.

One owner said two of her staff from the Amhara region recently packed up and fled after six years in Shashamene.

The government should prioritise "credible prosecution and redress" to prevent such violence from happening again, HRW's Bader said.

Chapman, the hotel owner, said she would stay in the area to see if the government would compensate her for her losses, but she has no plans to reopen.

"I still love Ethiopia... But as far as doing business, I'm finished. Retired," she said.

"The Oromo retired me."