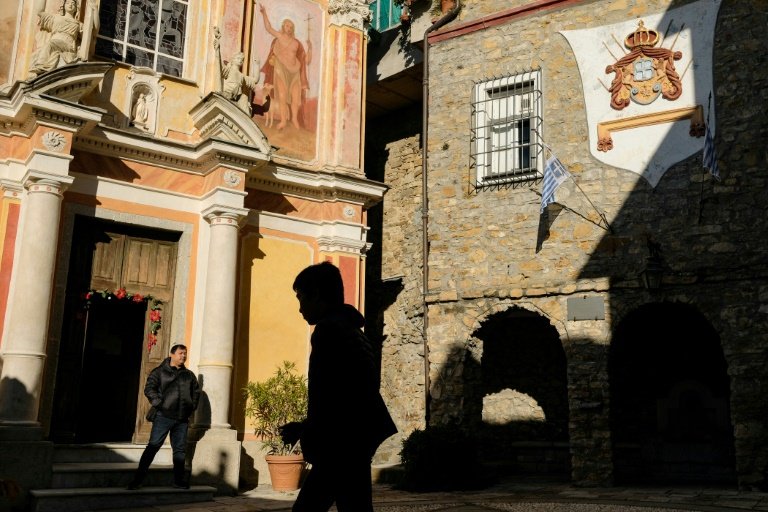 The princess showed off her tiny realm, sitting peaceful and picturesque, high above the Italian Riviera.

But trouble is afoot in the self-declared micronation of Seborga, where a pretender to the "crown" is stoking passionate opposition.

The hilltop village, where the Knights Templar are said by locals to have hidden the Holy Grail, insists that documents dating to the 18th century prove it was never legally incorporated into Italy.

It hopes its claim will boost tourism and attract new residents, saving it from the fate of other small Italian towns, where depopulation has left historic centres empty and shops closed.

Its quest is even more urgent following the coronavirus pandemic and nationwide lockdown, which hit the local economy hard.

"I guess every little girl has a dream of being a princess. It's like a fairytale," says Nina Menegatto, the village's first "princess", who was elected in November, told AFP before the epidemic broke out. 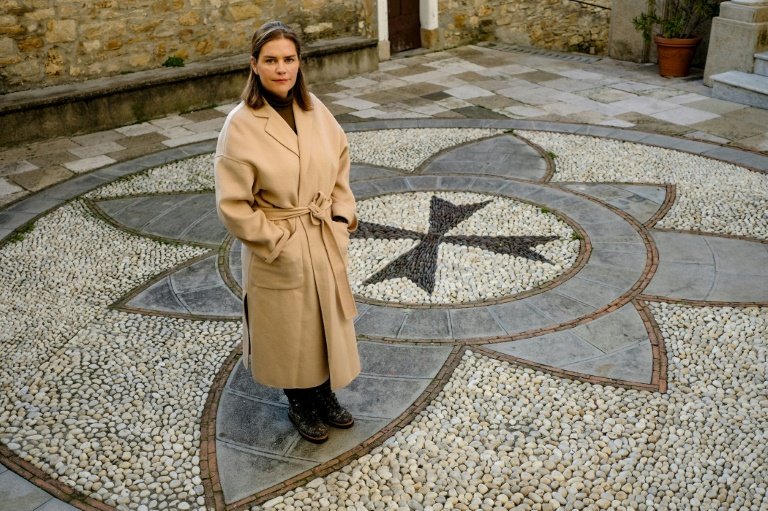 The German-born 41-year-old, who manages a property company in Monaco when not attending to official duties, visits her "subjects" carrying her baby in a sling.

She giggles as she tries on the gaudy gold crown kept on display in the tourist information office.

"I didn't think I'd ever become a princess. But I got a lot of support from the population and I really appreciate it," she says.

Her May coronation was postponed due to the lockdown but has been rescheduled for August 20 and Menegatto hopes the ceremony will draw fans of royal pomp and circumstance from far and wide.

She and her ministers want to reintroduce the local currency, the Luigino, and build a luxury hotel on a nearby outcrop with a view, she says, of four countries: France, Monaco, Italy and the Principality of Seborga.

It is not the world's only unrecognised micronation: from the Principality of Hutt River in Western Australia, to the Republic of Saugeais in eastern France, several self-declared "sovereign" lands boast their own banknotes, flags and stamps.

Sealand, founded on a concrete platform built off Britain as a World War II defence, even has its own football team.

But Seborga's 320 or so inhabitants say that its special status is based on fact not fancy and are determined the government in Rome acknowledge it. 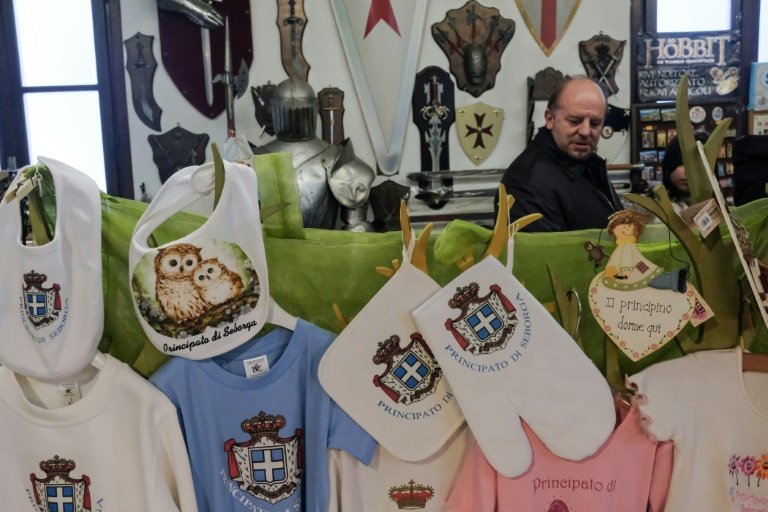 Seborga has about 320 inhabitants / © AFP

In 954, the village became the property of Benedictine monks, and Seborgans say that in 1079 their abbot was made a prince of the Holy Roman Empire.

The powerful royal Savoy dynasty then bought it in 1697, but the transaction was never officially registered.

The villagers insist that mistake invalidated the sale -- or suggest it never took place, a claim supported by historians who say the original deed has never been found.

Years of negotiations followed with Savoy duke Victor Amadeus II -- who would go on to become King of Sardinia -- about having the sale ratified, but appear to have petered out.

The locals say the principality was then left out of the act of unification of Italy in 1861 and the formation of the Italian republic in 1946.

So is this quaint one-street hamlet of pensioners an independent state?

Matthew Vester, history professor at West Virginia University, told AFP that it was not. 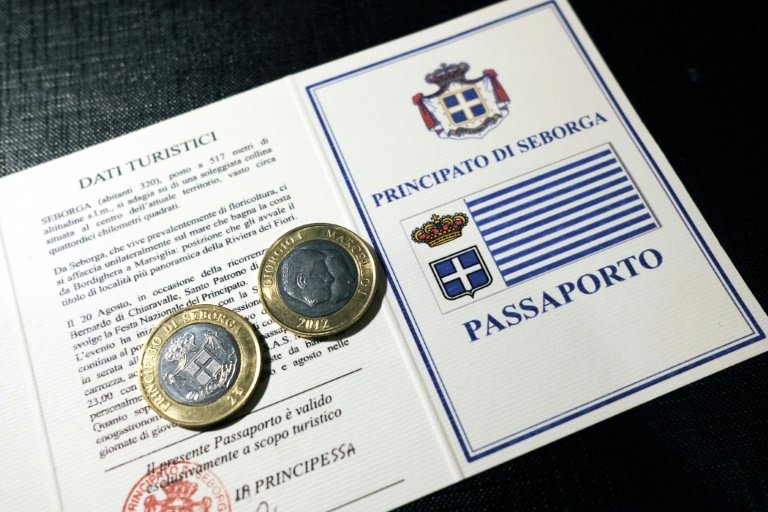 The local currency is the Luigino / © AFP

"Documents show agents of the King of Sardinia effectively took possession of Seborga in 1729, with the consent and support of local inhabitants," he said.

The Italian foreign ministry did not respond to a request for comment on the village's status.

But Menegatto refuses to be deterred.

Though the European Court of Human Rights in Strasbourg has rejected the village's bid to be recognised as a sovereign state, she is bent on trying again, with the help of a new team of lawyers.

Menegatto defeated her only rival Laura Di Bisceglie, daughter of the late Giorgio Carbone, a genial grower of the yellow mimosa flower who revived the idea of Seborga as a principality in the early 1960s.

Paolo Calcagno, associate professor of history at the University of Genoa, told AFP the idea was rooted in myth, for the abbots ruling Seborga "were not princes, the title never appears in medieval documents".

That did not prevent Prince Giorgio drawing up a constitution, creating a national anthem and royal coat of arms. 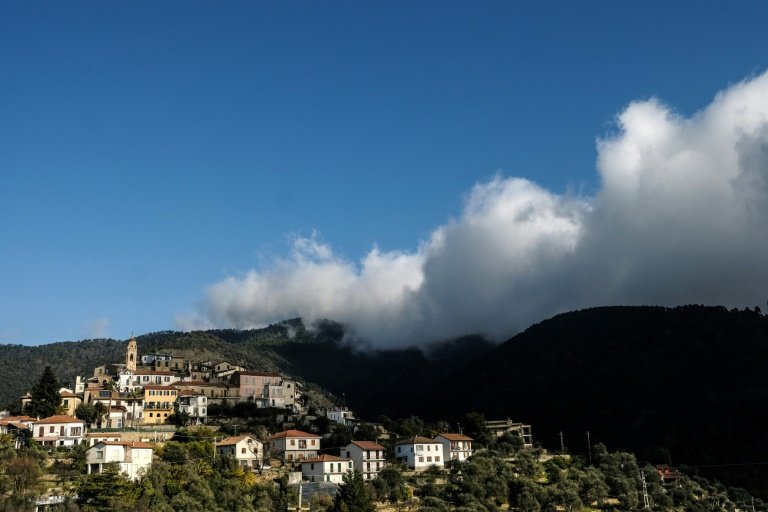 The village of Seborga lies in northwestern Italy / © AFP

He also mobilised a standing army, consisting today of Secondo Messali, a jaunty 64-year old who has served as interior minister, finance minister and prime minister, and is now captain of the small voluntary guard.

There's not a soul in the village that doesn't talk fondly of the bewhiskered Carbone.

"My father gave everything for Seborga, and I would have done the same," sniffs Di Bisceglie, who runs a souvenir shop near the foreign ministry, where blue and white-striped Seborgan flags snap in the wind.

Villagers, huddling out of the cold in the local bar pre-virus, said Menegatto, who got 122 votes to Di Bisceglie's 69, won for her ambitious plans for tourism in an area that lives primarily off agriculture and the flower industry.

The local population normally swells to about 2,000 in summer, when busloads of day-trippers arrive.

But in winter, the only signs of movement are a few French hikers who clatter down quiet passageways with hiking poles.

As well as the luxury hotel, there has been talk of connecting Seborga to the coast far below by cable car and getting cruise ships to include it in their itineraries.

But Di Bisceglie said her first act as princess would have been to recover the historic documents to prove Seborga's independence, which she claims were taken from the palace after her father's death in 2009.

What sets Seborga apart, she insists, is its history and the legend of the Holy Grail, which she says is code for "a great secret" hidden there -- though she admits "we don't know what it is".

Elena Bellomo, an expert at Cardiff University on the Templar Orders in northwest Italy, told AFP there was "no medieval evidence that there were Templars in the area of Seborga".

The theory that the Grail is stashed there is a "modern myth", she added.

That has not stopped the village decorating its ancient stone houses with pictures of Templar knights, or directing tourists to a tiny square, where cobblestones form the shape of the Templar cross.

Messali, with his guard livery and blue beret, says that he feels both Italian and Seborgan.

Residents pay taxes to Rome and vote in Italy's elections, but Seborga is his adopted home, where he cheerfully does guard duty and holds the keys to the tiny prison, a stone room with a straw-covered floor and iron shackles that has not been used for centuries.

These days the Seborgans' beef is with those seen as usurpers. 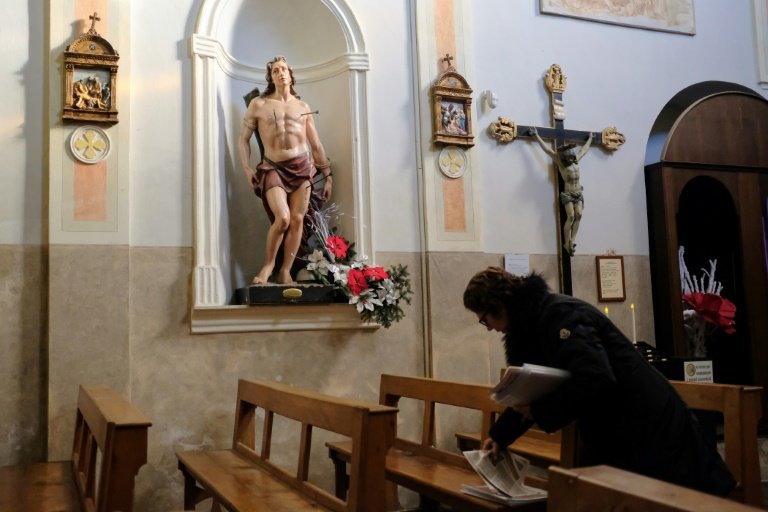 Frenchman Nicolas Mutte has proclaimed himself prince of Seborga and given himself the title of His Serene Highness Nicolas I.

He claims a historic link with royalty as an alleged descendant of Napoleon III's aide-de-camp.

He moved to the village with an entourage of dark-suited advisers but has been charged in France with fraud and the production of counterfeit passports and currency, and an official investigation is still going on.

Mutte vigorously denies the claims, telling AFP in an pre-virus interview in Seborga that the charges were "politically motivated".

He said that he had begun getting his rival principality recognised internationally, beginning with Brazil, which he claims has given it diplomatic recognition.

Contacted by AFP, the Brazilian foreign ministry in Brasilia denied it had done so.

Menegatto's household said Mutte and his advisers had left Seborga in March, just ahead of the lockdown, and had yet to return.

Local pensioner Gustav Ottolenghi, 88, who has written a book on Seborga's history, said there was nothing stopping Mutte proclaiming himself prince.

"I have always supported the fairytale, because it was useful for the village. But the formal title doesn't exist.

"No-one can stop you saying you're the prince or princess, and every now and then people come forward to do so," he said.

In 2006, a woman styling herself as Princess Yasmine von Hohenstaufen Anjou Plantagenet reportedly claimed she was the rightful ruler and offered to return the principality to the Italian state.

Locals at the time rallied around Carbone, but some have since become somewhat disillusioned with a royal governance that cannot "repair a road or a broken street light", Ottolenghi says.

They are not about to take up their swords against Seborga's "Venerabilis Ordo Sancti Sepulchri", a Templar knight faction that believes its Gran Maestro should have the crown.

It is one of several "chivalric" associations with their own rites, robes and rules that fight bitterly over Seborga's soul but are not recognised by the Catholic Church.

One man, however, is determined to make sure justice prevails.

"Whoever they may be, phoney princes or swindlers are not welcome in Seborga," he said.