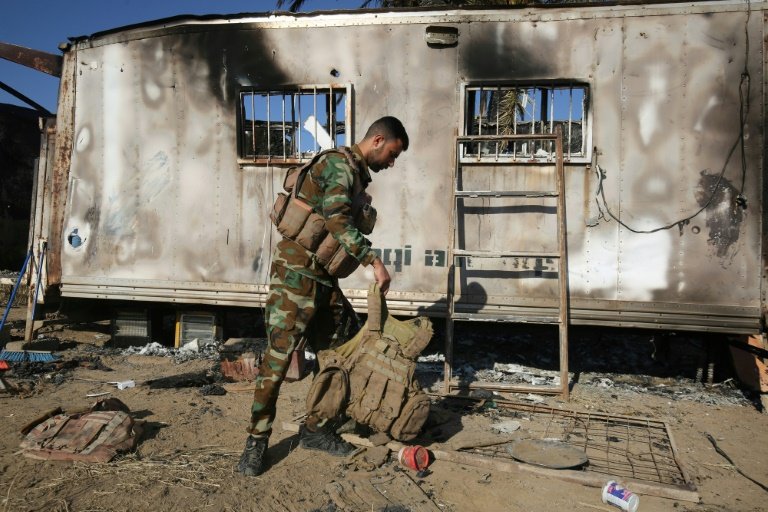 An Iraqi fighter with the Hashed al-Shaabi force inspects the site of the Islamic State group attack in Mukaishefah, about 180 km (110 miles) north of Baghdad, in May 2020 / © AFP/File

Secretary of State Mike Pompeo on Thursday urged allies to make up a shortfall in funding to defeat the Islamic State movement despite a budget crunch after the devastation of the coronavirus pandemic.

The United States and Italy led a meeting of 31 nations on fighting the extremists, held virtually due to precautions to stop the virus.

A US raid last year killed the group's leader, Abu Bakr al-Baghdadi, shortly after President Donald Trump declared the group that once ruled vast swathes of Syria and Iraq had been defeated on the battlefield.

"That said, our fight against ISIS continues, and will for the foreseeable future. We cannot rest," Pompeo told the conference.

"We must continue to root out ISIS cells and networks and provide stabilization assistance to liberated areas in Iraq and Syria," he said.

"It's true that the pandemic is putting enormous pressure on all of our budgets, but we urge your nations to pledge toward our goal of more than $700 million for 2020," he said.

The funding drive by the coalition, which seeks to bring stability to Iraq and Syria, has raised only $200 million this year as of May 26, a State Department spokesperson said.

The United States has pledged $50 million for northeastern Syria as well as $100 million in support for Iraq, whose new prime minister, Mustafa Kadhemi, has been welcomed by Washington.

The Islamic State group at its height carried out grisly mass executions and enslaved non-Muslims as it inspired attacks around the West.

Even as the extremists' presence has dwindled in its former stronghold, alarm has grown over the Islamic State group's influence in West Africa and Afghanistan.

The United States blamed the Islamic State group for a horrific attack last month at a maternity hospital in Kabul, saying the militants wanted to scuttle a nascent peace process between the Taliban and the Kabul government.