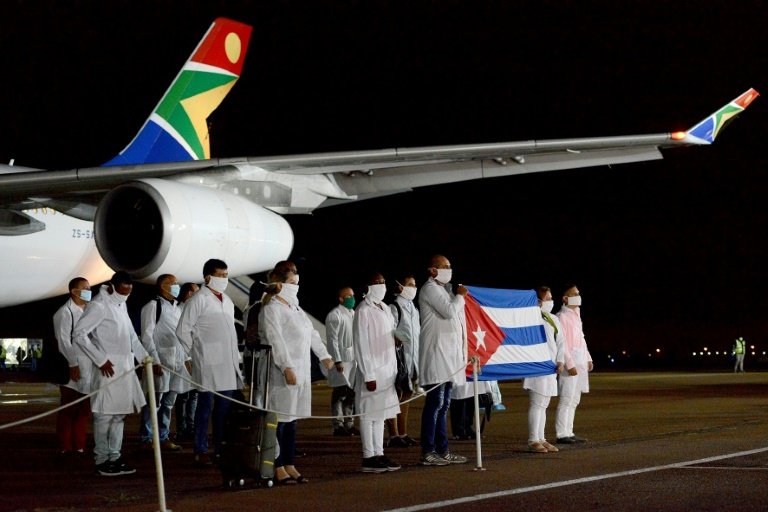 Cuban medical workers arrive at the Waterkloof Air Force Base in Pretoria in an effort to fight the coronavirus, in a photo released by the South African government on April 27 / © DIRCO/AFP/File

US Secretary of State Mike Pompeo on Wednesday criticized South Africa and Qatar for accepting doctors from Cuba to battle the coronavirus, accusing the communist island of profiting from the pandemic.

Cuba's globe-trotting doctors have long been a source of diplomatic soft power and pride for Havana, but Washington says the medical workers only benefit the government and has encouraged them to defect.

"We've noticed how the regime in Havana has taken advantage of the COVID-19 pandemic to continue its exploitation of Cuban medical workers," Pompeo told reporters.

"We applaud leaders in Brazil and in Ecuador and Bolivia and other countries which have refused to turn a blind eye to these abuses by the Cuban regime and ask all countries to do the same, including places like South Africa and Qatar," he said.

"Governments accepting Cuban doctors must pay them directly. Otherwise, when they pay the regime, they are helping the Cuban government turn a profit on human trafficking."

South Africa, which like Qatar has friendly relations with the United States, on Monday announced that 217 Cuban doctors had arrived in the country, which has the highest number of coronavirus infections in Africa.

Cuba has sent doctors to more than 20 countries during the COVID-19 pandemic including hard-hit Italy as well as Mexico. France has also authorized Cuban teams to help in its overseas territories.

"Cuba's solidarity further isolates the aggressive policies of the United States," he said as he shared articles from Cuban state media.

Cuba has made health care a societal pillar despite the poverty of the island, which has been subject to US sanctions for six decades.

Former president Barack Obama sought to reconcile with Cuba, calling the isolation policy a failure, and ended a program in which Washington encouraged Cuban doctors to defect and resettle in the United States -- whose capitalist medical system offers exponentially higher incomes.

President Donald Trump's administration has snapped back US pressure sharply and has imposed visa restrictions on Cuban officials involved in medical missions.

Cuba says it earned $6.3 billion from its medical dispatches in 2018 and used the proceeds to finance its own universal health care coverage.

One of the staunchest critics of the program is Brazilian President Jair Bolsonaro, a far-right ally of Trump, who kicked out 8,000 Cuban health workers as he took office.

Cuba's health system briefly became an issue in the US presidential election as opponents of leftist Bernie Sanders assailed his past praise for Havana's record on medical care and literacy.