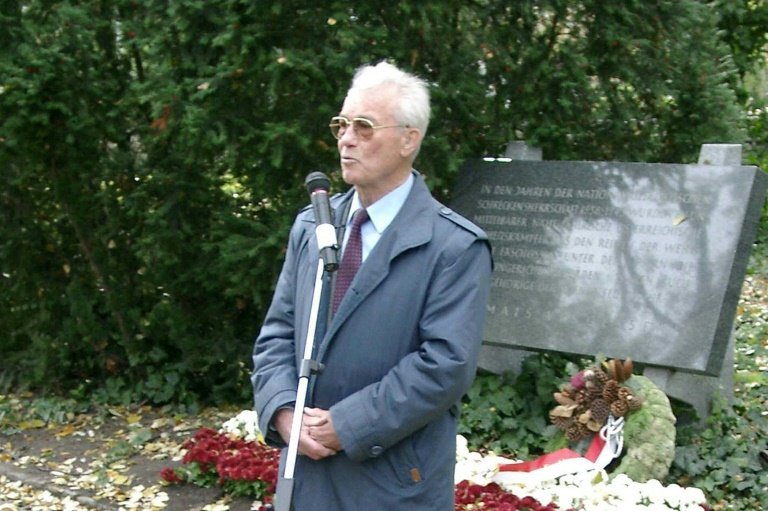 An Austrian who deserted Nazi forces and decades later campaigned to rehabilitate those who refused to fight for Hitler has died at the age of 97, his group said Sunday.

Richard Wadani, denounced as a traitor and coward long after his return home from serving in the British army, died at the weekend, according to the campaign group he co-founded.

The group, "Justice for the Victims of the Nazi's Military Judiciary," paid tribute to Wadani, who was born in Prague in 1922 but moved to his mother's hometown of Vienna in 1938.

"It is thanks to his tireless efforts over decades that the deserters of the Nazi armed forces and all other victims of the Nazi's military judiciary are legally rehabilitated," the group's president Thomas Geldmacher said in a statement.

"Richard Wadani stood for bravery, moral courage and an unshakable sense of justice," he added.

After a failed desertion attempt in 1942, Wadani joined Allied forces in 1944 near Aachen in Germany.

After the war, in 1946, he returned to Vienna, working mostly as a volleyball trainer.

"When I turned up at the employment agency wearing my British army uniform, I was turned away with the words: 'How could you dare serve in a foreign army?'," Wadani once said.

In 2002, he co-founded the organisation to push for justice for those who had deserted the Nazi forces or refused to fight.

It took until 2009 -- as it did in Germany -- for Austria to quash all remaining convictions of those who had refused to fight.

In 2014, a monument was finally inaugurated in downtown Vienna to honour the estimated 1,500 people from Austria executed by the Nazis for deserting or refusing to fight in World War II.

In an interview in 2014, Wadani told AFP that the Third Reich, which annexed Austria in 1938, was "a regime that morally one could not fight for.

"But it was easier after the war to point the finger at deserters instead of explaining to the vast majority of people who fought that they had been fooled," he added.

"Lots of deserters died bitter that they were considered as 'swines' for risking their lives to oppose the Nazis," he said.

Hundreds of thousands of Austrians served in Adolf Hitler's armed forces during the 1939-45 conflict.

Around 30,000 death sentences were passed in total on those who refused to fight or were caught deserting, 20,000 of which were carried out, including on some 1,500 from Austria.

Although many top henchmen from Hitler downwards were Austrians, for many years the small Alpine country was slow to acknowledge its shared responsibility for the Holocaust and the other crimes of the Nazis, historians say.