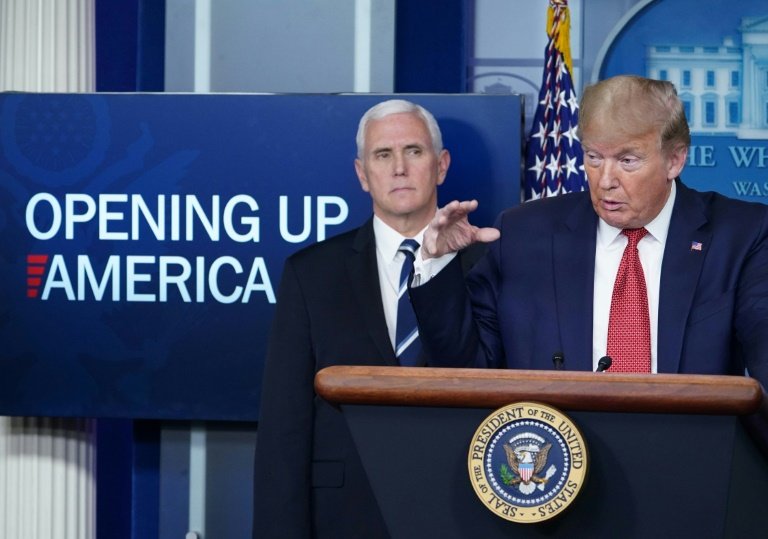 President Donald Trump on Thursday laid out guidelines for a gradual reopening of the United States after the battering of the coronavirus pandemic, saying normal life should resume quickly in some states.

Trump's new push came as he saw progress in his campaign to pressure China, with fellow Western leaders agreeing that Beijing has not been transparent on the origins of the virus that has infected more than 2.1 million people.

Facing re-election in November, Trump has been impatient to lift a lockdown that has thrown 22 million people out of work in the world's largest economy, although plenty of leaders at home and abroad fear that hastily easing restrictions will cause more people to die. 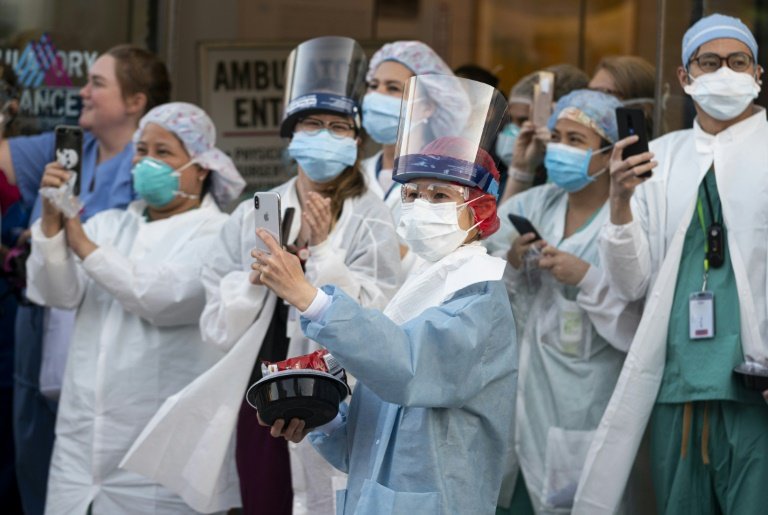 Health workers react to people applauding in front of Mount Sinai Hospital in Queens, New York to show gratitude to medical staff and essential workers on the front lines of the coronavirus pandemic / © AFP

"Based on the latest data, our team of experts now agrees that we can begin the next front in our war," Trump told a news conference. "We're opening up our country."

The United States accounts for the most COVID-19 deaths of any country, with almost 33,000 of the nearly 144,000 fatalities worldwide.

But pointing to sparsely populated parts of the country, Trump said some states were already free from the impact and can open "literally tomorrow."

"We have large sections of the country, right now, that can think about opening," he said.

The White House outlined three "phases" under which each governor would determine the permitted size of gatherings depending on their location and levels of infection.

Trump's recommendations were a far cry from his previous calls for a sudden end to social distancing measures -- as well as his earlier call for the nation to be fully open in time for Easter on April 12.

He also pulled back from a battle over authority, with governors ultimately deciding what to do -- as was the case before his announcement.

Hours earlier, Governor Andrew Cuomo of New York, the US epicenter of the virus, said he was extending the shutdown there until May 15 despite signs of progress. 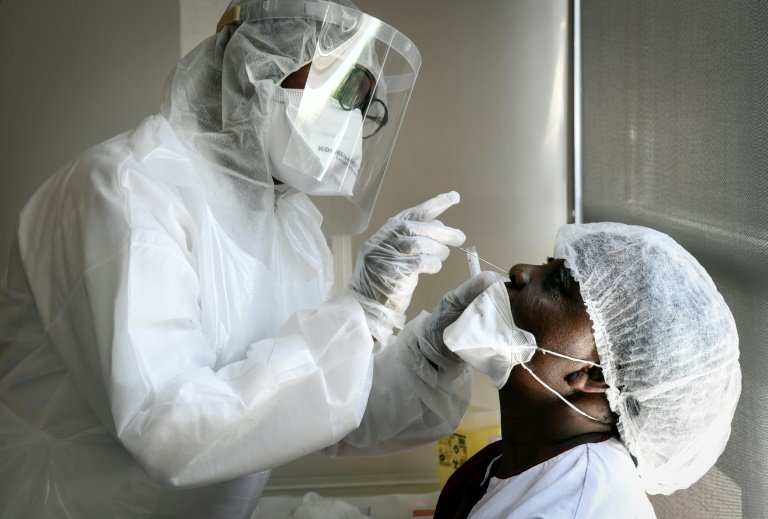 "I would like to see that infection rate get down even more," Cuomo said, reporting that 606 people had died in the last day, the lowest number in 10 days.

Britain, which shut down later than most of continental Europe, said it would extend its lockdown for at least another three weeks. Its daily death toll spiked to 861.

Trump, who in January said the United States had the coronavirus "totally under control," has sharply criticized China over the virus that was first detected in its metropolis of Wuhan. 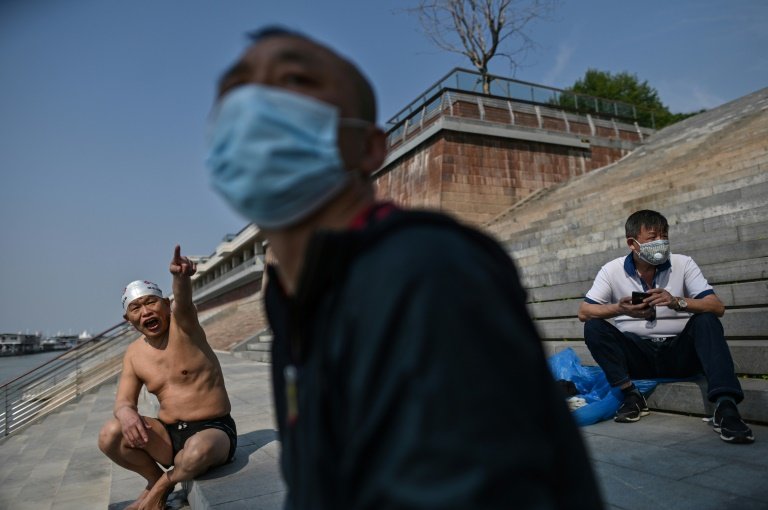 He appeared to win support during a videoconference Thursday among leaders of the Group of Seven industrialized democracies.

British Foreign Secretary Dominic Raab told reporters there could be no "business as usual" with China.

"We'll have to ask the hard questions about how it came about and how it couldn't have been stopped earlier," said Raab, filling in for Prime Minister Boris Johnson who is recovering from the virus.

French President Emmanuel Macron warned not to be "naive" in believing China has handled the outbreak well. 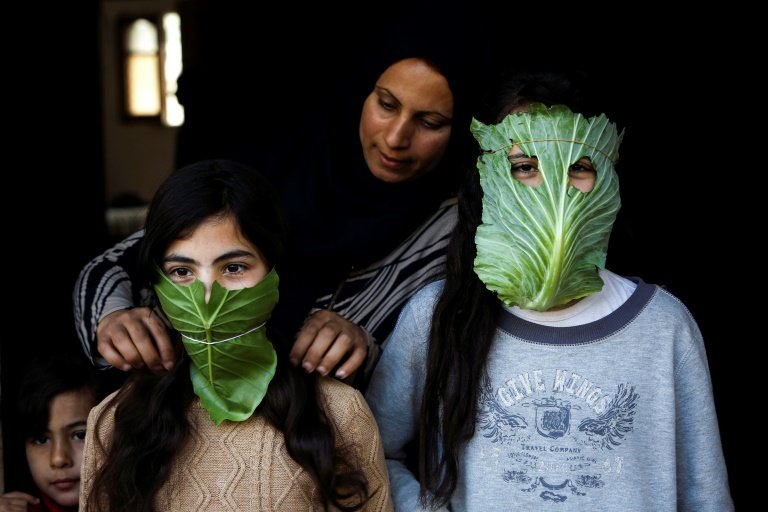 A Palestinian mother entertains her children with makeshift masks made of cabbage in Beit Lahia in the northern Gaza Strip on April 16, 2020 / © AFP

"There are clearly things that have happened that we don't know about," he said in an interview with the Financial Times.

China has said its scientists believe the virus was first transmitted to humans at a meat market in Wuhan that butchered exotic animals.

The Washington Post and Fox News reported there were growing suspicions the virus in fact slipped out of a sensitive laboratory in Wuhan that studied bats, blamed for the SARS coronavirus outbreak in 2003.

Neither outlet suggested the virus was spread deliberately. 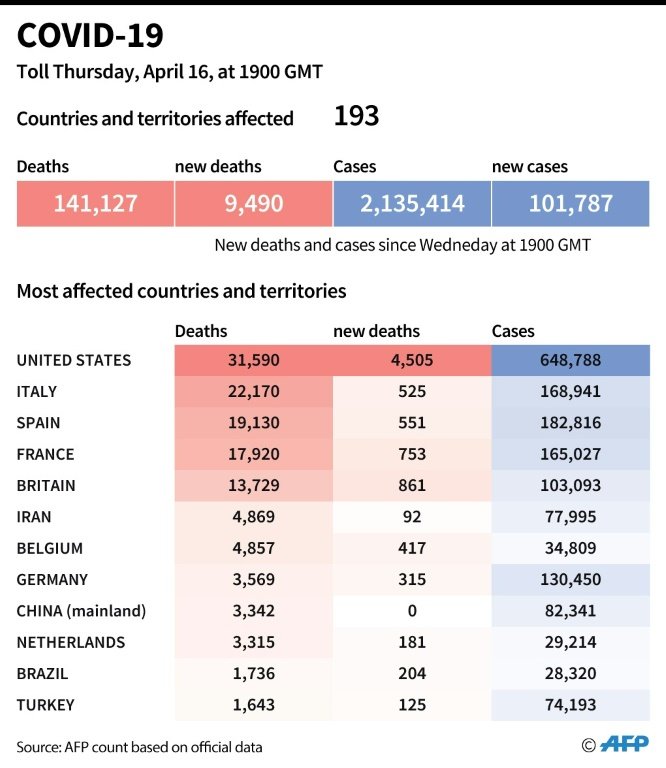 Secretary of State Mike Pompeo said China should have been more transparent about the laboratory.

"We're doing a full investigation of everything we can to learn how it is the case that this virus got away, got out into the world and now has created so much tragedy -- so much death," Pompeo told Fox News. 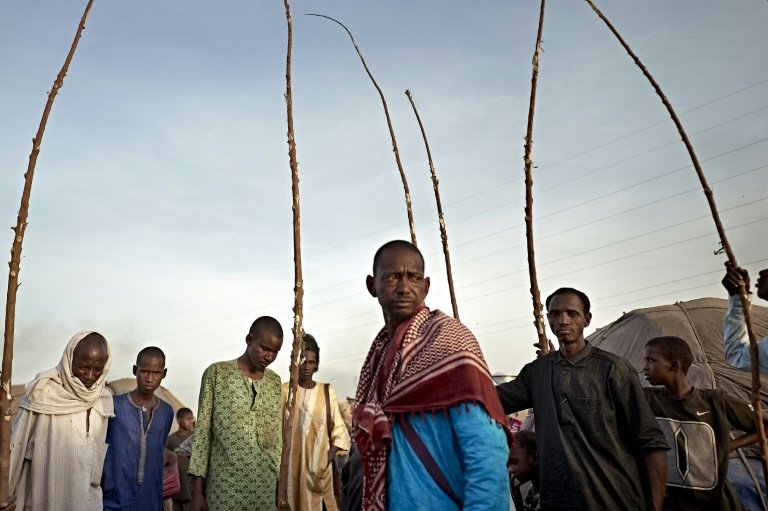 A group of Fulani men at a camp for internally displaced people in Bamako. More than 1,200 people who fled their villages in central Mali live at the camp, where conditions don't allow for social distancing or other preventative measures / © AFP

Xi called attempts to politicize the pandemic "detrimental to international cooperation" and Putin denounced "attempts by some people to smear China," according to China's state-run Xinhua news agency.

Chinese foreign ministry spokesman Zhao Lijian -- who previously outraged the United States by spreading an unfounded theory that US troops introduced the coronavirus in Wuhan -- quoted the World Health Organization as saying there was no evidence the virus came from a lab.

"Many well-known medical experts in the world also believe that the so-called laboratory leak hypothesis has no scientific basis," Zhao said.

Trump has also gone on the attack against the WHO, saying he will cut US funding for the UN body because it did not press China harder on initial statements that the virus could not be spread among people. 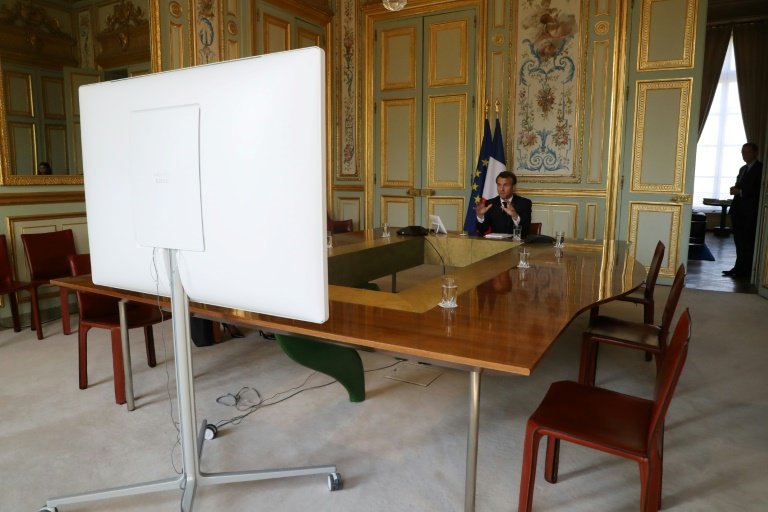 That Trump offensive has drawn little international support. German Chancellor Angela Merkel, whose aggressive response is credited with limiting deaths in Europe's largest economy, voiced "full support" for the WHO, whose role is especially noticeable in developing countries.

After weeks on strict lockdowns, hard-hit Spain and Italy have begun to ease restrictions. 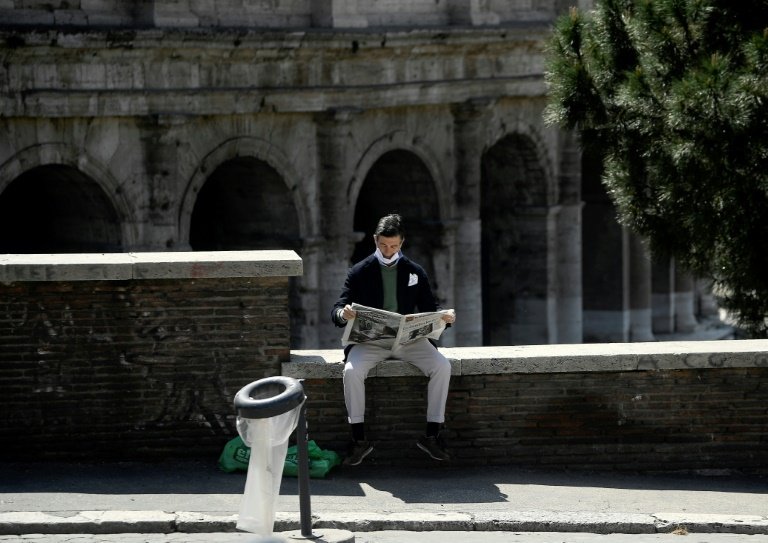 In Venice, residents in mandatory face masks enjoyed quiet streets and canals that once thronged with selfie-stick wielding tourists.

"I bought many books," Venetian Catrina said after visiting one of the city's bookshops, which were allowed to reopen this week.

"I needed them. Like an addict -- for something of substance." 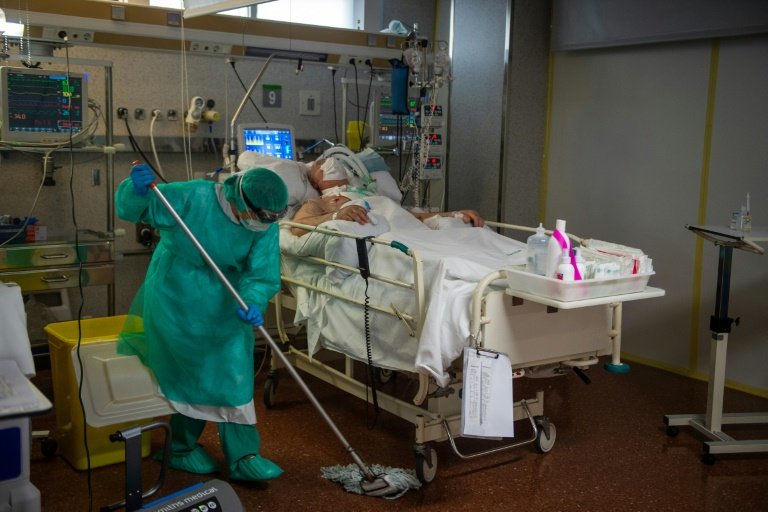 Switzerland announced that some shops and services -- including beauty salons -- will be allowed to resume business from April 27.

But Russia postponed its May 9 celebrations for the 75th anniversary of the Soviet victory in World War II, an extravaganza to which Putin has hoped to draw leaders including Trump.

"With the global recession gathering pace, there could be hundreds of thousands of additional child deaths in 2020," Guterres warned.