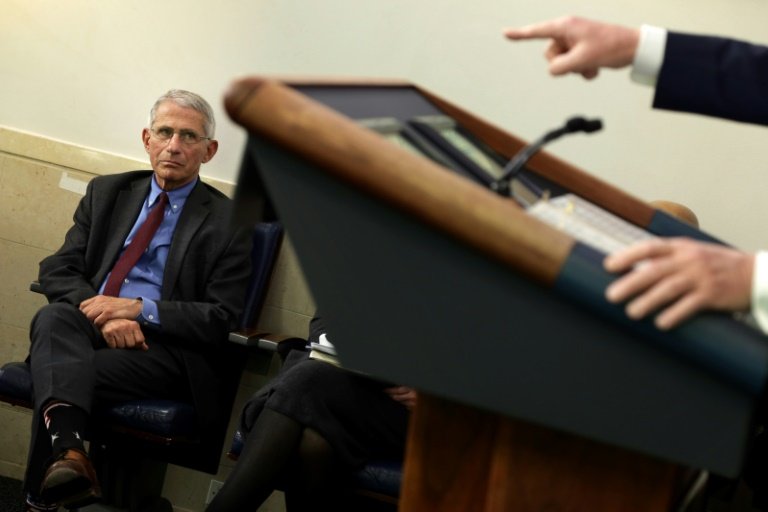 Anthony Fauci said that the number of COVID-19 deaths in the United States -- around 22,000 and climbing -- could have been lower had the country acted faster / © GETTY IMAGES NORTH AMERICA/AFP/File

The US coronavirus epidemic appears to be hitting its peak, but scientists are already warning a second wave is possible if President Donald Trump and others move too fast in easing the nationwide lockdown.

It's a debate that is also playing out in Europe, with Spain on Monday reopening parts of its economy while France was set to prolong stay at home orders for several more weeks.

The big difference is America's federal system of government that delegates powers to the governors of the 50 states, even if the president in theory can use his powers to oversee a coordinated national strategy.

After half a million confirmed infections, the caseload appears to be on the cusp of stabilizing.

The US is "nearing the peak," Robert Redfield, director of the Centers for Disease Control and Prevention (CDC) said Monday on NBC News. But that doesn't mean social distancing can be dropped right away.

That will have to be "a step-by-step gradual process," he said.

His comments were echoed by New York Governor Andrew Cuomo, who said Monday the "worst is over" in the state hardest hit by the outbreak, where more than 10,000 people have died.

Cuomo said he would be conferring with fellow governors about gradually reopening the state, but emphasized it would not be like flipping a switch.

For COVID-19 has not disappeared as a result of social distancing policies.

With the potential exception of New York, a huge majority of the population is believed to have avoided being infected and therefore remains susceptible, especially as a vaccine is believed to be a long way away.

The objective of the first phase was to avoid overloading the health care system with too many sick people -- but the virus continues to circulate and can infect new hosts.

"Come on everybody, up to 50 percent of this country is going to get infected before this is over," Michael Osterholm, director of the Center for Infectious Disease Research at the University of Minnesota said Monday on MSNBC.

By summer, the number of Americans infected will be between just two and five percent, former Food and Drug Administration chief Scott Gottlieb said this weekend.

Authorities thus envisage a gradual re-opening of the taps while keeping close tabs on the data.

Detailed plans by research institutions and universities abound on how to accomplish this, but the White House has yet to announce anything.

Trump in fact appears to be preoccupied with one of his main pandemic advisors, Anthony Fauci, the director of the National Institute of Allergy and Infectious Diseases.

The man dubbed "America's coronavirus hero" for putting science at the center of the crisis acknowledged this weekend that the number of deaths -- around 22,000 and climbing -- could have been lower had the country acted faster.

The president, on the defensive following reports that he downplayed the risks despite warnings by his intelligence services, on Sunday retweeted a post carrying the hashtag #FireFauci -- although the White House later said talk of Fauci being pushed out was "ridiculous."

All the experts' roadmaps to normalcy say that there needs to be more testing, more hospital beds made available, and widespread contact tracing in order to quarantine those exposed to infected people.

Johns Hopkins University researchers estimate that the country will need an army of 100,000 contact tracers, either paid or voluntary.

But none of this has started.

"If you opened up the entire country May 1, then we would very clearly have a rebound," Christopher Murray, director of the Institute for Health Metrics and Evaluation of the University of Washington told CBS News.

It may be possible that certain states can ease their lockdowns starting from mid-May, he said.

The worst imagined outcomes haven't so far materialized in the United States, which could lead to complacency.

California and the rest of the West Coast confined their populations early and avoided the sorts of outbreaks seen in New York, New Jersey, Louisiana and Michigan. Even in New York, the governor has voiced relief that medics have not had to choose between their patients.

The governor of Texas has said he may unveil a timeline this week for reopening the state.

Gottlieb, the former FDA chief, envisages governors and mayors allowing businesses to reopen with perhaps half of their workforces, or to continue to confine the elderly.

But, says the infectious disease expert Osterholm, even that requires a national consensus.

"This is not even the beginning of the end, rather, this is the end of the beginning, we now need to realize we have a long road ahead of us."