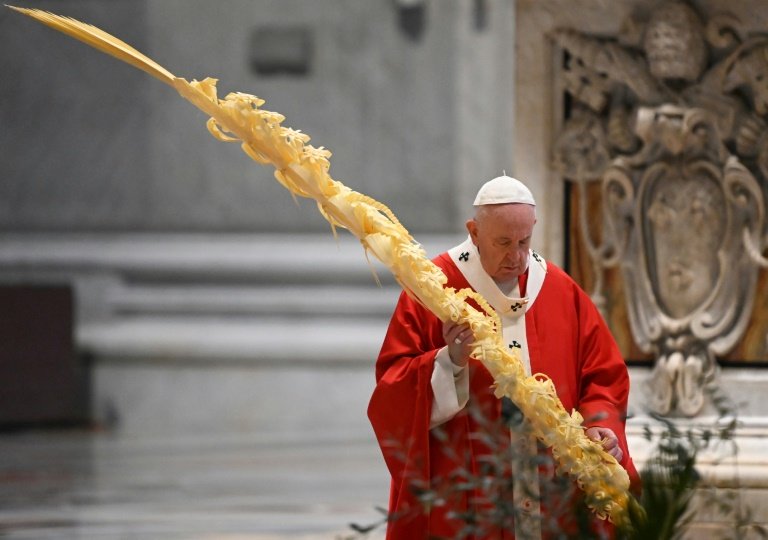 Pope Francis called for courage in the face of the coronavirus pandemic as he delivered Palm Sunday mass by livestream instead of before Saint Peter's Square crowds.

The Vatican is abandoning centuries of tradition and refraining from public celebrations of the official start of the Catholic world's Holy Week.

Pope Francis called the pandemic a tragedy on Sunday that must be faced with courage and hope.

"Today, in the tragedy of a pandemic, in the face of the many false securities that have now crumbled, in the face of so many hopes betrayed, in the sense of abandonment that weighs upon our hearts, Jesus says to each one of us: 'Courage, open your heart to my love'," the pope said.

Palm Sunday marks the arrival of Jesus in Jerusalem before his crucifixion. Easter Sunday on April 12 celebrates his resurrection from the dead.

But many of the world's 1.3 billion Catholics are observing the sacred days under home confinement -- just like the 83-year-old pontiff.

Pope Francis has been communicating with the outside world by video so that crowds do not gather to see and hear him in one of the world's most famous squares.

Vatican City itself has been closed to tourists for nearly a month as part of global efforts to stop the spread of a disease that has officially killed more than 65,000 people worldwide.

The Argentine-born pontiff went on to call on the faithful to overcome their fears and remember that they are not alone.

"When we have our back to the wall, when we find ourselves at a dead end, with no light and no way of escape, when it seems that God himself is not responding, we should remember that we are not alone," the pope said in his prayer.

Pope Francis himself went down with a cold in late February and was reportedly tested for COVID-19 twice as a precaution because seven people in the Vatican have caught the virus.

The Vatican says the pope is now in good health.