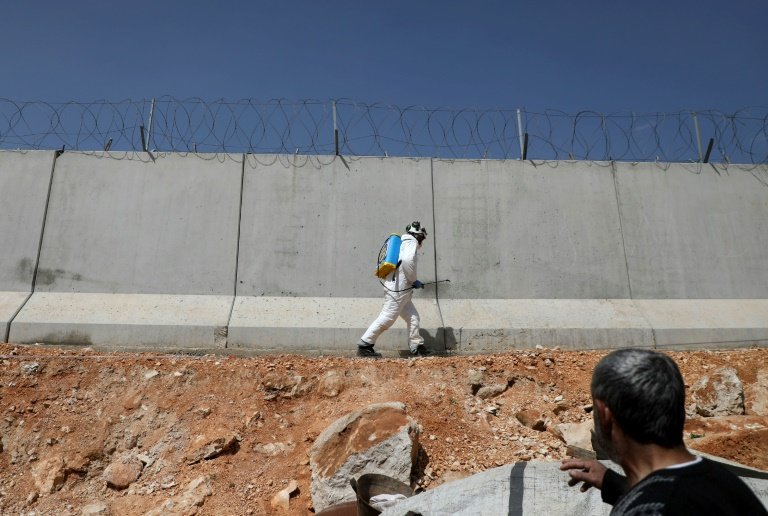 The novel coronavirus has put global trade on hold, placed half of the world population in confinement and has the potential to topple governments and reshape diplomatic relations.

The United Nations has appealed for ceasefires in all the major conflicts rocking the planet, with its chief Antonio Guterres on Friday warning "the worst is yet to come". But it remains unclear what the pandemic's impact will be on the multiple wars roiling the Middle East.

Here is an overview of the impact so far on the conflicts in Syria, Yemen, Libya and Iraq:

The COVID-19 outbreak turned into a pandemic just as a ceasefire reached by the two main foreign power brokers in Syria's nine-year-old war -- Russia and Turkey -- was taking effect.

The three million people living in the ceasefire zone, in the country's northwestern region of Idlib, had little hope the deal would hold.

Yet fears the coronavirus could spread like wildfire across the devastated country appear to have given the truce an extended lease of life.

According to the Syrian Observatory for Human Rights, the month of March saw the lowest civilian death toll since the conflict started in 2011, with 103 deaths.

The ability of the multiple administrations in Syria -- the Damascus government, the autonomous Kurdish administration in the northeast and the jihadist-led alliance that runs Idlib -- to manage the coronavirus threat is key to their credibility.

"This epidemic is a way for Damascus to show that the Syrian state is efficient and all territories should be returned under its governance," analyst Fabrice Balanche said.

However the pandemic and the global mobilisation it requires could precipitate the departure of US-led troops from Syria and neighbouring Iraq.

This in turn could create a vacuum in which the Islamic State jihadist group, still reeling from the demise of its "caliphate" a year ago, could seek to step up its attacks.

The Yemeni government and the Huthi rebels initially responded positively to the UN appeal for a ceasefire, as did neighbouring Saudi Arabia, which leads a military coalition in support of the government.

That rare glimmer of hope in the five-year-old conflict was short-lived however and last week Saudi air defences intercepted ballistic missiles over Riyadh and a border city fired by the Iran-backed rebels.

The Saudi-led coalition retaliated by striking Huthi targets in the rebel-held capital Sanaa on Monday.

Talks have repeatedly faltered but the UN envoy Martin Griffiths is holding daily consultations in a bid to clinch a nationwide ceasefire.

More flare-ups in Yemen could compound a humanitarian crisis often described as the worst in the world and invite a coronavirus outbreak of catastrophic proportions.

In a country where the health infrastructure has collapsed, where water is a rare commodity and where 24 million people require humanitarian assistance, the population fears being wiped out if a ceasefire doesn't allow for adequate aid.

"People will end up dying on the streets, bodies will be rotting in the open," said Mohammed Omar, a taxi driver in the Red Sea port city of Hodeida.

Much like Yemen, the main protagonists in the Libyan conflict initially welcomed the UN ceasefire call but swiftly resumed hostilities.

Fierce fighting has rocked the south of the capital Tripoli in recent days, suggesting the risk of a major coronavirus outbreak is not enough to make guns fall silent.

Turkey has recently played a key role in the conflict, throwing its weight behind the UN-recognised Government of National Accord.

That could eventually favour forces loyal to eastern-based strongman Khalifa Haftar, who launched an assault on Tripoli one year ago and has the backing of Russia, Egypt and the United Arab Emirates.

Western countries have been hit hardest by the pandemic, which could prompt them to divert both military resources and peace-brokering capacity from foreign conflicts.

A report by the International Crisis Group said European officials had reported that efforts to secure a ceasefire in Libya were no longer receiving high-level attention due to the pandemic.

Iraq is no longer gripped by fully-fledged conflict but it remains vulnerable to an IS resurgence in some regions and its two main foreign backers are at each other's throats.

Iran and the United States are two of the countries most affected by the coronavirus but there has been no sign of any let-up in their battle for influence that has largely played out on Iraqi soil.

With most non-US troops in the coalition now gone and some bases evacuated, American personnel are now regrouped in a handful of locations in Iraq.

Washington has deployed Patriot air defence missiles, prompting fears of a fresh escalation with Tehran, whose proxies it blames for a spate of rocket attacks on bases housing US troops.