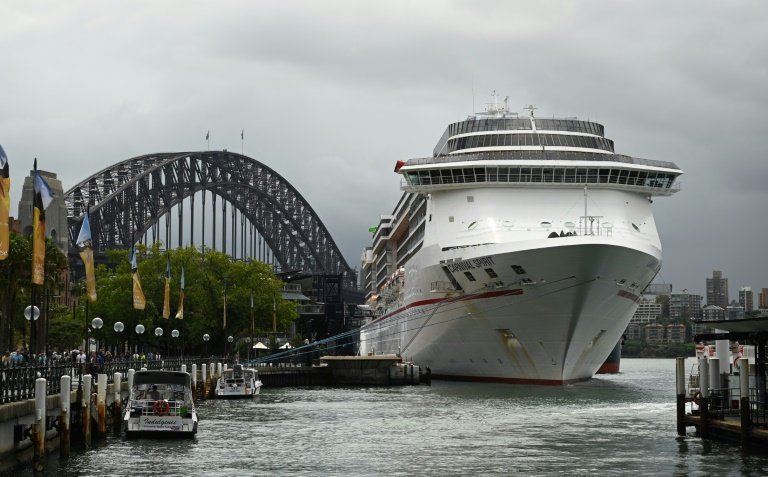 More than a dozen cruise ships are believed to be off Australia's coast, carrying around 15,000 crew and some experiencing outbreaks of coronavirus / © AFP

Australia insisted Friday it would not let the crew of multiple virus-stricken cruise ships into the country, slapping aside suggestions it was falling short on legal and moral obligations.

More than a dozen ships are believed to be off Australia's coast, carrying around 15,000 crew and some experiencing outbreaks of coronavirus.

"We have issued notices to all of these ships to leave Australian waters," Australian Border Force Commissioner Michael Outram told local media Friday.

"If ever there was a time, I think, for ships to go back to where they're registered, it's probably during a time of a global pandemic like this."

Many vessels fly under flags of convenience -- registered to countries such as Panama, the Bahamas and Liberia, which have scant capacity to screen or treat an influx of possible virus carriers.

The issue has become a global problem, with ships looking for safe ports from Florida to Yokohama to Perth and angry authorities accusing the multi-billion dollar cruise industry of being reckless.

Australian authorities say they will not risk unleashing a wave of COVID-19-positive people into the country, burdening local health services that are already scrambling to increase capacity.

Cruise ships have already accounted for almost 10 percent of Australia's more than 5,000 infections and several deaths.

And the issue has become politically fraught, with local pundits dubbing the vessels "Death Ships" and one nervous state leader calling for the navy to intercept a cruise ship full of German tourists.

Attitudes hardened when the government allowed 2,700 passengers to walk off the Ruby Princess in Sydney last month, despite a cruise ship ban being in place.

More than 300 of the passengers later tested positive for COVID-19.

Prime Minister Scott Morrison and his controversial home affairs minister have sought to publicly distance themselves from the mistake, leaving state authorities and the security services to comment.

Police earlier this week announced plans to drop doctors onto eight ships to check on crew members, in a bid to fulfil a basic duty of care.

Some ships are already heeding the warning to leave and others have said they will do so after they refuel.

But some are still warning of a humanitarian crisis and refusing to depart.

The Cruise Lines International Association -- a trade group -- said this week it was working to the resolve the problem but needed government help.

"If allowed, cruise lines will arrange charter flights for their crew or transport aboard their own vessels, but workable arrangements with government are required to make this happen," said the group's Australasia director Joel Katz.

"Australia has successfully processed many tens of thousands of people through its airports in line with COVID-19 precautions, and we believe it is entirely safe and feasible to allow movements of crew in a similarly sensible and ordered process."

Natalie Klein, a law professor at the University of New South Wales said convention meant that distressed ships are allowed to dock, but states could make exceptions.

"The Maritime Labour Convention makes clear that Australia is duty-bound to offer medical care to crew on ships in its territorial waters," she said.

"Under international law, a state might refuse access to its ports for a ship that poses a serious and unacceptable safety, environmental, health or security threat to it. A pandemic would no doubt count in this regard."