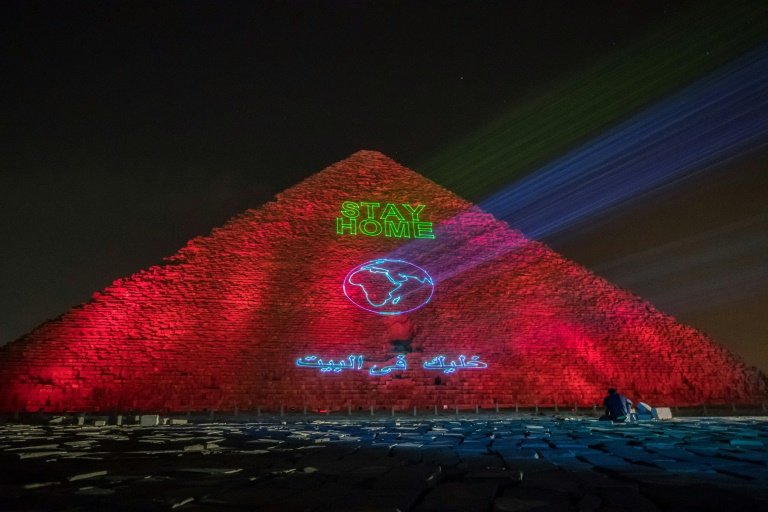 Harsh lockdowns aimed at halting the march of the coronavirus pandemic extended worldwide Monday as the death toll soared past 37,600 amid new waves of US outbreaks.

Despite slivers of hope in stricken Italy and Spain, the tough measures that have confined some two-fifths of the globe's population to their homes were broadened.

Moscow and Lagos joined the roll call of cities around the globe with eerily empty streets, while Virginia and Maryland became the latest US states to announce emergency stay-at-home orders, followed quickly by the capital city Washington.

In a symbol of the scale of the challenge facing humanity, a US military medical ship sailed into New York to relieve the pressure on overwhelmed hospitals bracing for the peak of the pandemic.

President Donald Trump sought to reassure Americans that authorities were ramping up distribution of desperately needed equipment like ventilators and personal protective gear.

He also offered a stark warning, saying "challenging times are ahead for the next 30 days" as he acknowledged mulling a potential nationwide stay-at-home order.

"We're sort of putting it all on the line," Trump said, likening the efforts against coronavirus as a "war."

The number of confirmed COVID-19 cases around the world rose above 784,000, with 413,000 of those in Europe, while most of the confirmed deaths are also from the continent, according to an AFP tally.

World leaders -- several of whom have been stricken or forced into isolation -- are still grappling for ways to deal with a crisis that will have economic and social shockwaves unseen since World War II. 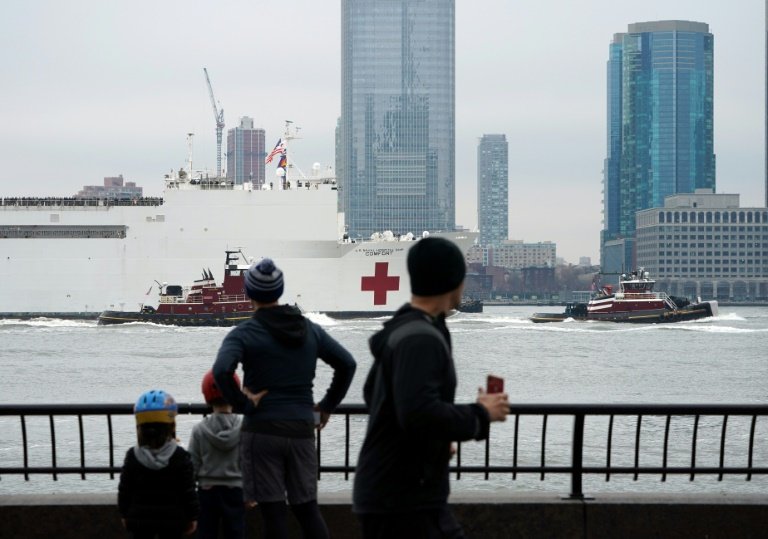 The USNS Comfort medical ship moves up the Hudson River as it arrives on March 30, 2020 in New York / © AFP

The US Navy's USNS Comfort, which has space for 1,000 beds and a dozen operating rooms, docked one day after Trump extended US social-distancing measures until the end of April.

"It will be good for morale," said New York Mayor Bill de Blasio of the arrival of the Comfort, which will help people requiring intensive care unrelated to coronavirus, easing the burden on hospitals.

In Russia, Putin urged residents of Moscow to "very seriously" respect a lockdown that has closed all non-essential shops, including restaurants.

Anna, a 36-year-old web designer, said the lockdown would be hard for her and her five-year-old daughter. "But I don't want Arina to get sick," she told AFP on her way to buy bread. "So of course we will observe the quarantine."

Fears of spiking cases drove Moscow to follow Italy, Spain and France in imposing full lockdowns, and Europe remains the epicentre of the pandemic with the death toll there passing 26,500 on Monday, according to an AFP tally.

After weeks of life spent under a national lockdown in Italy, signs were emerging that drastic action could slow the outbreak's spread. 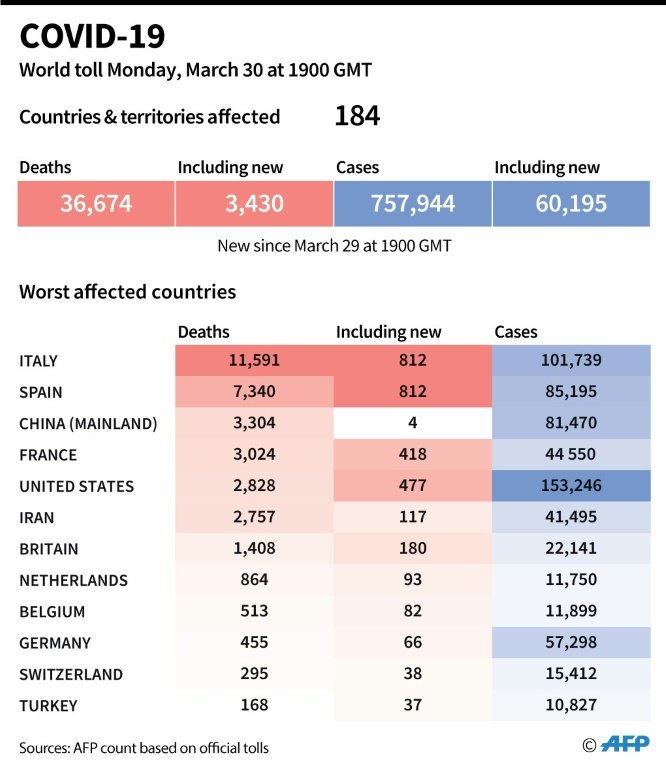 Even though the country's death toll grew by 812 in 24 hours to 11,591, figures from the civil protection service showed the rate of new COVID-19 infections hitting a new low of just 4.1 percent and the number of people who had recovered reached a new high.

"The data are better but our work continues," said Giulio Gallera, the chief medical officer of Lombardy, Italy's worst-hit region.

Spain, which announced another 812 virus deaths in 24 hours, joined the United States and Italy in surpassing the number of cases in China, where the disease first emerged in December.

France reported its highest daily number of deaths since the outbreak began, saying 418 more people had succumbed in hospital.

Even as the US health system was stretched to the limit, Trump said he was ordering some excess medical equipment be sent to Italy, France and Spain.

Britain and Italy both warned recently that measures to prevent disease spread would be in place for months to come.

In Britain, COVID-19 has hit high profile figures including Prime Minister Boris Johnson and Prince Charles, who was out of virus isolation, according to royal officials. 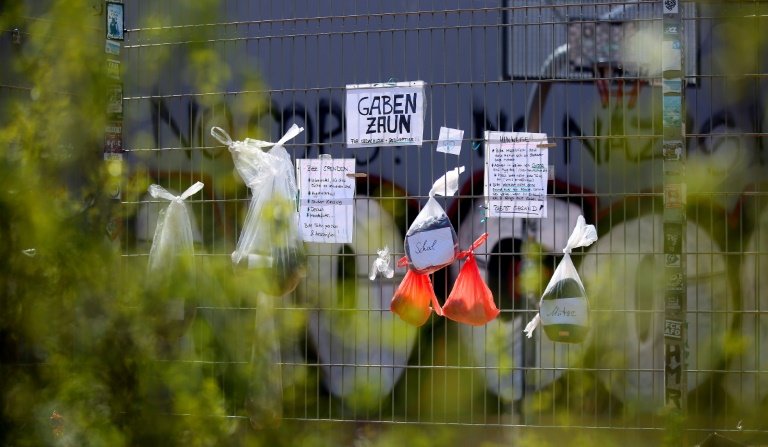 Bags with food and clothes donated for homeless people hang on a so-called gift fence in Leipzig, eastern Germany / © AFP

The lockdowns are causing hardship across the world but particularly in impoverished cities in Africa and Asia.

"Two weeks is too long. I don't know how we will cope," said student Abdul Rahim, 25, as he helped his sister sell food from a market stall.

"They need to be fed, but there is nothing to eat," vegetable vendor Irene Ruwisi said in the township of Mbare, pointing at her four grandchildren. "How do they expect us to survive?" 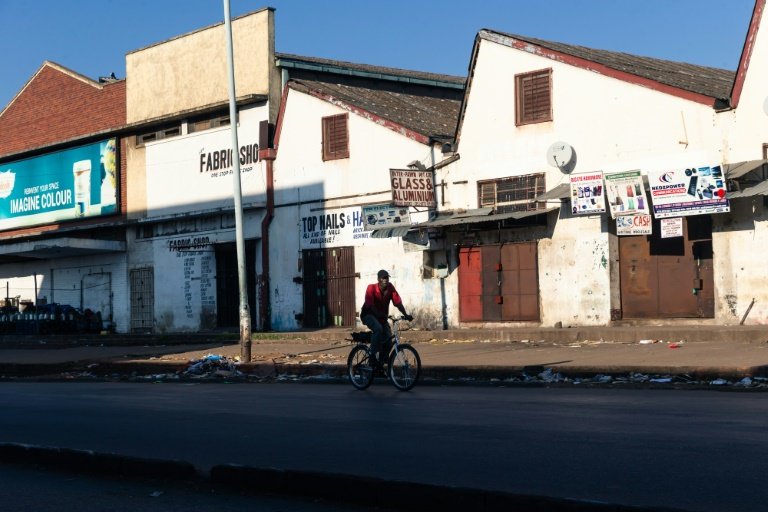 The shutdown has already put millions out of work and forced governments to rush through huge stimulus plans.

Experts in Germany, Europe's economic powerhouse, said the virus would shrink output there this year by up to 5.4 percent.

In the US, more than two thirds of the population were under lockdown orders.

"We are nowhere near over the hump," warned Louisiana Governor John Bel Edwards. "We still have an awful lot of work to do to flatten the curve."