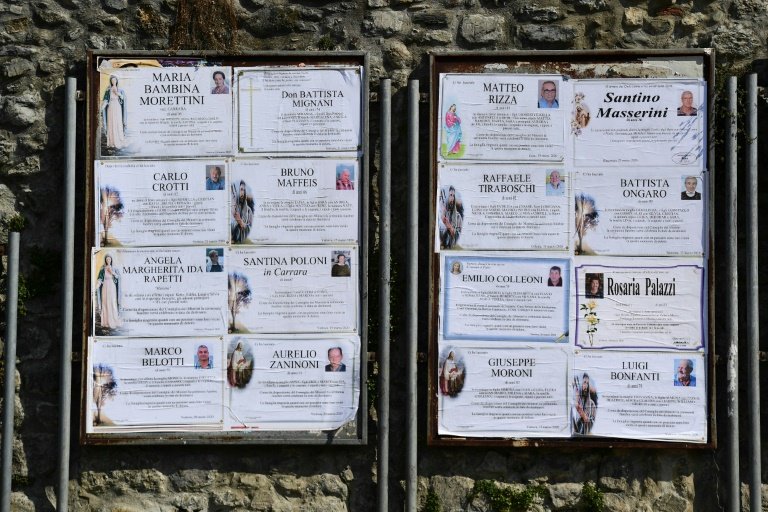 Obituaries on the walls of Vertova, near Bergamo, in northern Italy. / © AFP

With so many coronavirus numbers flying around, it can be hard to keep track of the bigger picture - but RTL Today are here to help.

Here is the latest news from our European neighbours, as of Wednesday 25 March.

Even as the rate of new deaths and confirmed cases has slowed considerably in the last few days, Italy remains the global epicentre of fatalities from coronavirus.

The enormous death toll in some northern villages has led to comparisons with the Second World War, and it will probably overtake China as the country with the most cases of the new disease within the next couple of days.

Deaths from coronavirus in Spain passed those in China today as authorities announced a further 738 fatalities.

The country was forced to call on NATO for help, as Spanish soldiers found elderly patients abandoned in care homes.

France has the fifth-most deaths from coronavirus, behind Iran. A national lockdown has been in place since 17 March, and is due to last two weeks; a 28-year-old from Nice became the youngest French victim of the new disease.

In the Grand Est region of France, which neighbours Luxembourg, there have been 407 deaths, while 595 people remain in intensive care.

Angela Merkel labelled the coronavirus Germany's biggest challenge since the Second World War, and the Chancellor herself was forced to go into self-isolation earlier in the week, although she has since tested negative.

All but 7 of the country's borders with Luxembourg have been closed, but while Germany ranks fifth for confirmed cases, it is only ninth in deaths, and experts have been astounded by its uniquely low mortality rate.

After initially planning a much-ridiculed strategy of 'herd immunity', the UK backtracked this week, imposing a three-week nationwide lockdown from Monday.

As the heir to the British throne, Prince Charles, tested positive on Wednesday, over 170,000 Britons registered for a new volunteer force in its first 24 hours.

Belgium closed its borders to non-essential travellers on 20 March. The country is on 'lockdown light', with social distancing measures in place similar to those in Luxembourg