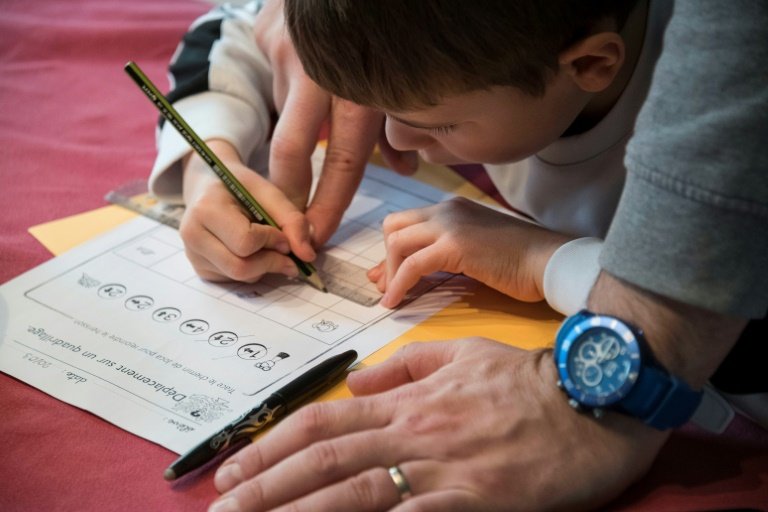 As millions of families hunker down amid the coronavirus crisis, the sudden reality of schooling from home risks widening the education gap between those with the means and support to keep up with lessons, and those who risk falling behind.

"I'm a teacher, and we live in a house where there's plenty of room, so I can help my two children, ages six and nine. But for someone stuck in a studio apartment with six kids -- let's not kid ourselves," said Albine Pasquet, who teaches French near Aix-en-Provence in southern France

An estimated 850 million young people cannot attend schools because of the coronavirus crisis, an "unprecedented challenge" for governments and educators, UNESCO said this week.

In the European countries enforcing strict lockdowns, educators are trying a mixture of so-called distance learning measures, such as online assignments or tutorials, and emailed exercises for corrections, to try to make up for lost class time.

For Paula Rodriguez, that means making sure her 16-year-old daughter Carla downloads homework and studies -- instead of just watching TV -- while also working her own logistics job from home in Madrid, Spain.

"But she has to go on the internet when she doesn't understand something, because she can't really contact her teachers. She sent a question to her maths teacher, but he didn't answer," Rodriguez said.

In Italy, where eight million students are stuck at home, some since mid-February, the government has promised 85 million euros ($91 million) to develop online learning.

But a study of European digital literacy last year found that three in 10 Italians do not regularly use the internet, and more than half lack proficiency in the digital basics.

"They're not exactly young and aren't used to the equipment, for example they don't turn up the sound on their computers, so they're talking but you can't hear them," he said.

More worrying is the outright lack of computer equipment in many homes, especially in poorer neighbourhoods.

"There are families who don't have a computer, nor a printer," said Laetitia, who teaches kindergarten at a school focussing on underprivileged children in the gritty 18th district of Paris.

An additional challenge is the language barrier for immigrant families, with parents who struggle to help their children with assignments.

"The older brothers and sisters can help, but they're not teachers," said Laetitia. "I hope this confinement ends soon, but it's clear that some children are going to fall behind."

France's Education Minister Jean-Michel Blanquer, who has issued guidelines for parents of the country's 12 million students now at home, has promised "extra efforts" for students at risk, in particular for first and second graders.

Yet even for families who can afford to buy the printers and pricey ink to handle weeks of lessons, home schooling coupled with parents working remotely means having to share a computer among multiple users.

In larger cities in particular, many children do not have the luxury of their own room or space for studying without distractions.

In Austria, news and television programmes are flooded with advice for homebound parents from psychologists and educators on how to structure their days, and even optimise the layout of their homes.

"What's really important is to organise yourself," said Sebastian Bred, who lives in Vienna with his eight-year-old son Erik.

"Erik is still at the level where we can help him, but sometimes we worry that we're not teaching him what he needs," Bred said.

Teachers themselves have been overwhelmed by the new normal, racing to set up distance learning regimes and trying to reassure parents worried that their children's educational futures are being compromised.

"All this is completely new, we have no idea what to do and neither do students -- some are totally lost because they don't have anyone to help them," said Sarah, a high school teacher in the Ariege department of southern France, who like many teachers asked that her last name not be used.

On Thursday, she managed to gather 44 of her 57 students for a WhatsApp chat "to take stock of where we are, and encourage them... That really did a lot of good for everyone."

Some teachers, and even students, say the disruptions could have a silver lining whose effects could persist long after classes resume.

"You realise that going to school is really fantastic," Samuel said.