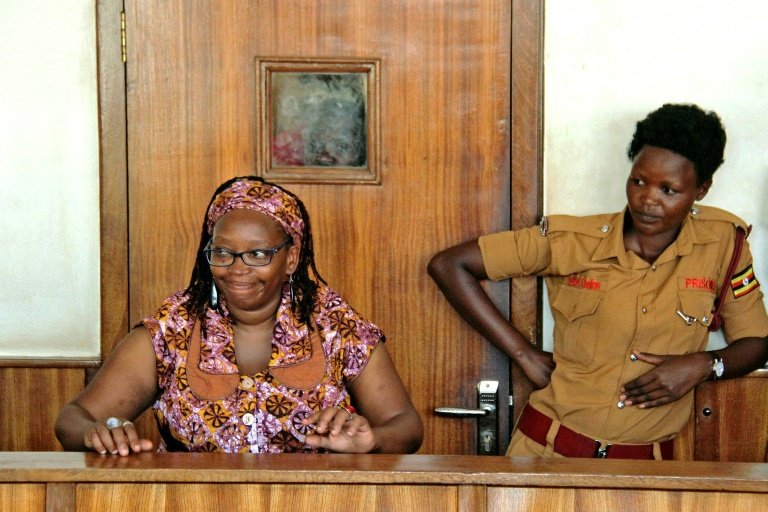 Nyanzi, pictured in April 2017 at her trial for cyber-harassment / © AFP/File

Ugandan activist and writer Stella Nyanzi walked free from court amid chaotic scenes Thursday after a judge overturned her conviction for "cyber-harassment" of President Yoweri Museveni.

Stella Nyanzi, a university researcher and rights activist known for using vulgar language to attack the president -- including calling him "a pair of buttocks" -- was convicted last August and sentenced to 18 months in jail.

High Court Justice Henry Peter Adonyo quashed Nyanzi's conviction by a magistrate court and ruled against an appeal from the prosecution to overturn the decision of the lower court to acquit Nyanzi of "offensive communication."

Nyanzi -- who had been in jail since November 2018 -- addressed dozens of supporters outside court asking them: "Why was I in prison? Why was I in court for all these months?"

"Museveni must go! Museveni, you are on notice," Nyanzi shouted before police and prison officers moved in to disperse her supporters from the court grounds.

In the resulting crush, Nyanzi appeared to faint and her supporters carried her away while prison officials insisted she had to re-enter the court in order for her to be offically discharged.

In the street outside, prison officers attempted to wrestle Nyanzi from her supporters and fired rifles at least six times -- although no one appeared to have been injured -- before supporters bundled her into a car and drove off.

Nyanzi, 45, had been found guilty of "cyber-harassment" for posting a poem on Facebook in which she said that Uganda would have been politically better off had Museveni, 75, died while his mother gave birth to him.

At the August 2019 hearing Nyanzi, who appeared from prison via video-link, bared her breasts in protest.

Nyanzi, an internationally-respected anthropologist, was formerly a research fellow at Makerere University but has since been dismissed, a decision she is challenging.

Utilising a technique of "radical rudeness" -- a tradition that has its roots in the anti-colonial struggle -- Nyanzi has become one of Uganda’s most prominent government critics, although her use of sexually explicit imagery has divided opinion in the largely conservative East African country.

Nyanzi first rose to prominence in 2016 when she stripped nearly naked in protest during an employment dispute.

Critics say that Museveni, who seized power at the head of a rebel army in 1986, is becoming increasingly intolerant of dissent and public confidence in the independence of the judiciary is low.