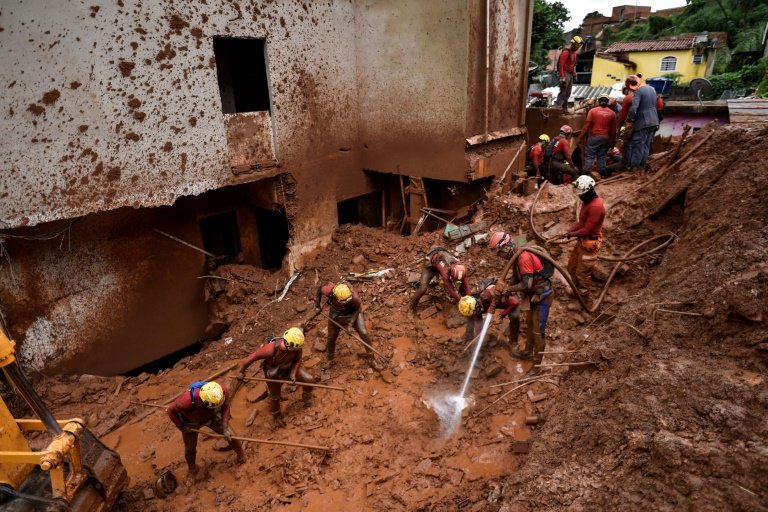 Rescue workers were searching for survivors on January 26, 2020 after a landslide in Belo Horizonte, capital of storm-hit Minas Gerais state in southeastern Brazil / © AFP

The death toll from days of intense storms and flooding in southeastern Brazil has risen to 44, authorities said Sunday.

In addition to the dead, the number of injured stands at 12 and that of the missing was lowered from 25 to 19, local Civil Defense officials said.

The dead have yet to be identified. Many were buried by landslides or in the debris of collapsed houses, which in many poorer parts of Brazil are shoddily built.

Officials said some 17,000 people have been forced to leave their homes in 58 towns and cities across Minas Gerais state, including in the capital Belo Horizonte, as well as in nearby areas. More than 10,000 others had to flee in two neighboring states.

Images taken from the ground and the air, some posted on social media, showed the vast sweep of the disaster, with damaged houses, fallen trees and downed utility poles, overflowing rivers, collapsed bridges and flooded neighborhoods.

The torrential rains -- the worst since records were first kept 110 years ago -- eased off on Sunday, but authorities said the risk of new landslides would continue through Friday in towns in the Belo Horizonte area.

From India, where he is on an official trip, President Jair Bolsonaro said the government was doing "everything possible," while adding that in such a large area "it is difficult to serve everyone."

Regional Development Minister Gustavo Canuto and Governor Romeu Zema of Minas Gerais state flew over the affected area and promised afterward in a news conference to prioritize humanitarian aid for the homeless. They announced immediate aid of 90 million reais (about $22 million).

Zema warned that without consistent, long-term public policies to reduce areas at risk, "we will see things like this many times over."

But in Vila Bernadete, a neighborhood on the edge of Belo Horizonte where six people died in a landslide that toppled seven hillside homes, a resident, Audemar Carneiro, said the area had never seemed at risk.

"Nothing like this has ever happened here," the 51-year-old told AFP. "It was a fairly safe place... It was an unannounced tragedy."