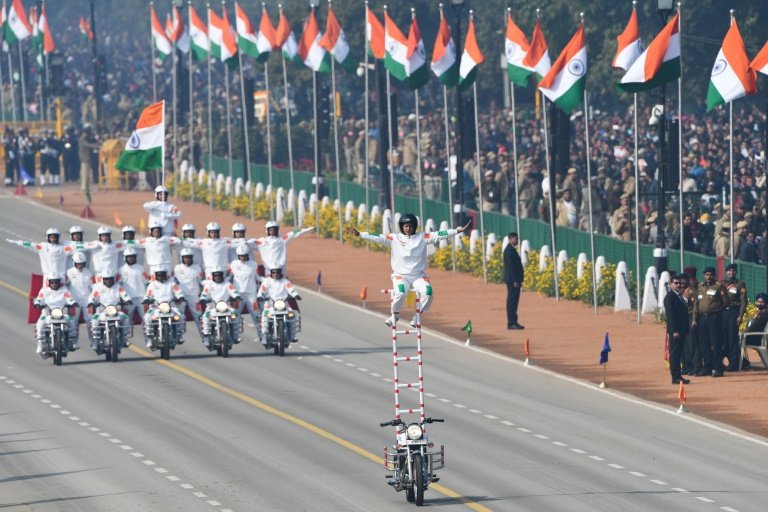 For the first time, the riders performing daredevil stunts on motorbikes to the delight of the crowds lining New Delhi's central Rajpath boulevard, were women / © AFP

For the first time, the riders performing daredevil stunts on motorbikes to the delight of the crowds lining New Delhi's central Rajpath boulevard, were women.

Inspector Seema Nag saluted the gathered VIPs as she led her fellow bikers, one precariously perched at the top of a ladder wedged behind her vehicle's handlebars as others formed a human pyramid, drawing the loudest cheers from thousands of spectators.

And in front of the guest of honour, Brazil's President Jair Bolsonaro, Captain Tania Shergill, a fourth-generation army officer, led an all-male Corps of Signals contingent. 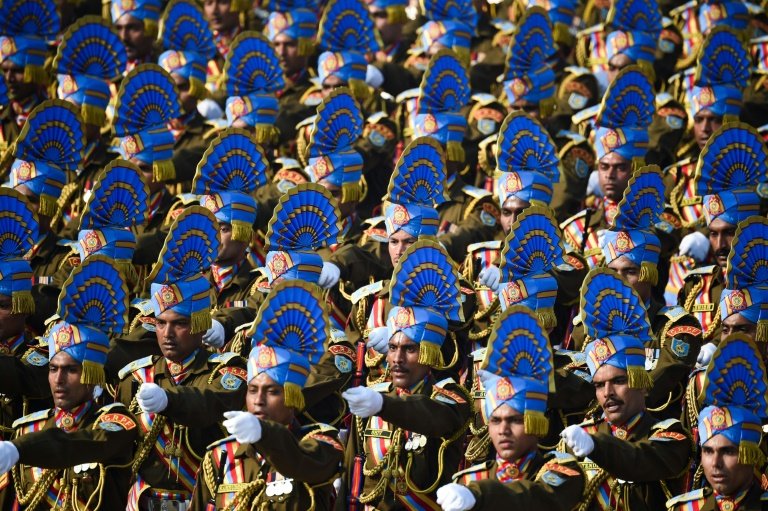 January 26 is the anniversary of India's adoption of its constitution in 1950. / © AFP

Bolsonaro sat next to Indian Prime Minister Narendra Modi -- who wore a saffron turban -- and waved and clapped from behind a bullet-proof glass.

January 26 is the anniversary of India's adoption of its constitution in 1950.

The two-hour showcase of military might and cultural diversity included everything from battle tanks and state-of-the-art weaponry to traditional dancers.

Scaled-down models of the Rafale aircraft were paraded by the air force, following the South Asian nation's purchase of 36 jets from France in 2016 in a multi-billion-dollar deal.

The mounted camels of the Border Security Force put in an early showing, strutting down the avenue in brightly coloured caparisons. 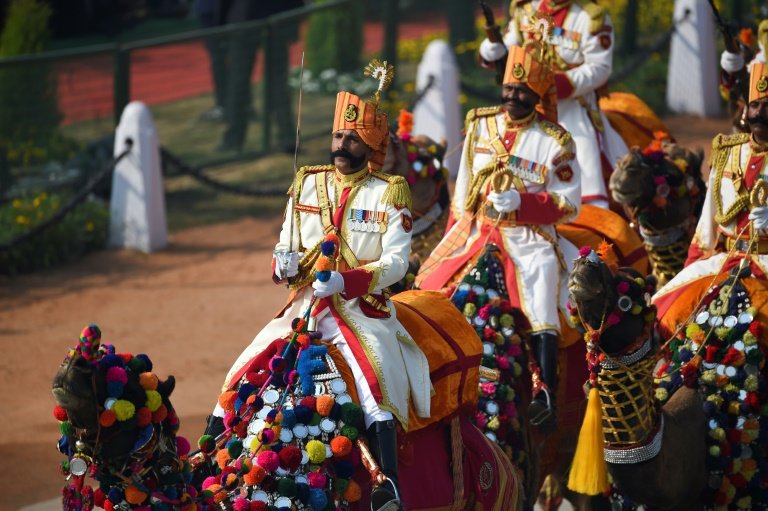 The mounted camels of the Border Security Force put in an early showing, strutting across the avenue in brightly coloured caparisons / © AFP

The show culminated with a Su-30 MKI fighter jet roaring through the sky in a "Vertical Charlie" aerobatic manoeuvre.

The parade was held against a backdrop of nationwide protests over a new citizenship law that critics say discriminates against minority Muslims, which make up 200 million people in India's 1.3 billion-strong population.

And as citizens celebrated in Delhi, in restive Indian Kashmir, all mobile phone services were suspended for several hours.

The cut came just a day after people in the Muslim majority area had internet services partially restored, after the central government cut access in August as it stripped the region of its semi-autonomous status.

And the northeastern state of Assam, where the protests first began, was rocked Sunday by four explosions which the police suspected were carried out by a separatist group. No-one was injured and nothing was damaged, police said.

Also on Sunday, hundreds of women blocked a Delhi highway to protest the Citizenship Amendment Act and a proposed National Register of Citizens. 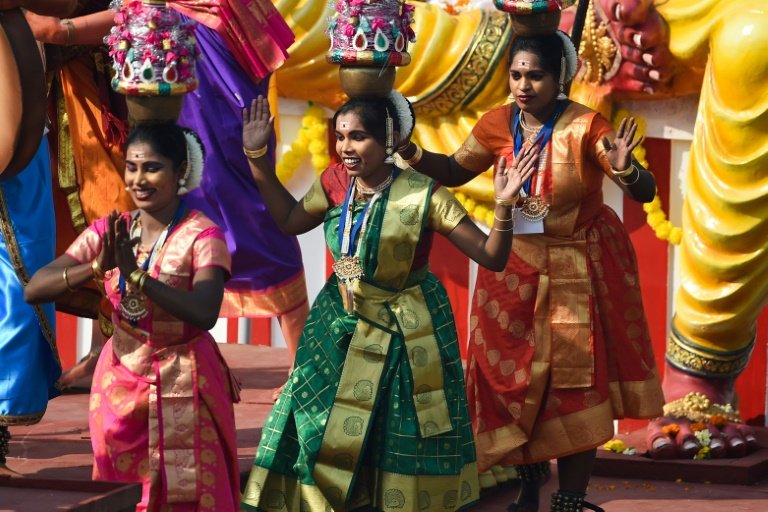 The new law makes it easier for persecuted religious minorities from three neighbouring countries to obtain citizenship, but not if they are Muslim.

Protesters say the law is against the secular principles enshrined in the Indian constitution.

There were also protests against Bolsonaro's visit, with a small rally held in the western city of Mumbai Friday where demonstrators questioned his stand on climate change and sexist comments against a female politician.

On Saturday the two nationalist leaders signed a slew of deals, including for defence and oil and gas, and promised to strengthen bilateral ties.

Last year Brazil complained about India's subsidies for sugar exports to the World Trade Organisation, saying it would hurt free competition in the global market.

India is the largest cane sugar producer in the world followed by Brazil, according to the International Sugar Organisation.