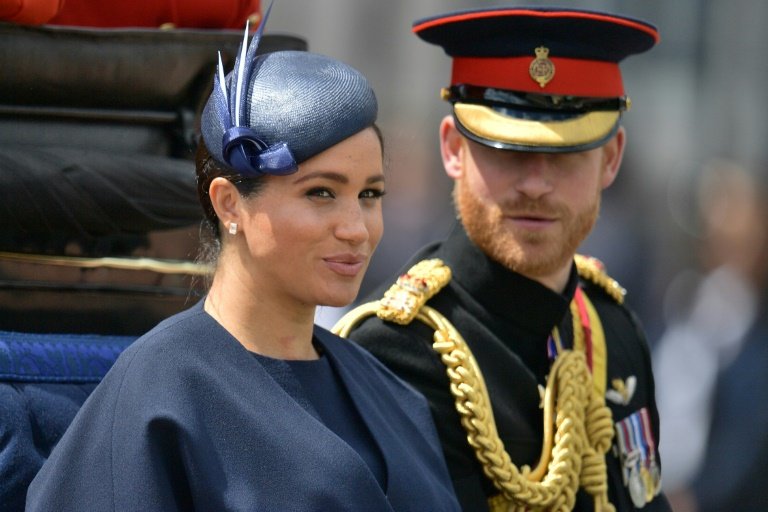 Britain's Meghan, Duchess of Sussex (L) is of mixed race, with a white father and African-American mother / © AFP/File

Prince Harry and his wife Meghan's abrupt announcement that they want to withdraw from frontline royal duties has sparked speculation about whether she may have been the target of racism.

Prince Harry and his wife Meghan's abrupt announcement that they want to withdraw from frontline royal duties has sparked speculation about whether she may have been the target of racism.

The couple's decision to step back as senior royals and seek financial independence from the monarchy follows months of harsh coverage of Meghan by some British media outlets.

The Duchess of Sussex, as she is formally known by her royal title, is of mixed race, with a white father and African-American mother.

Almost as soon as her relationship with Harry became public in 2016, some newspapers were accused of peddling offensive racial stereotypes about Meghan.

The Daily Mail headlined its "exclusive" announcing their romance as "Harry's girl is (almost) straight outta Compton", referring to the Los Angeles neighbourhood infamous for crime and poverty.

Meghan Markle grew up in nearby central LA and was educated at private schools.

In response Harry issued an unprecedented statement denouncing "the racial undertones of comment pieces" and "the sexism and racism of social media trolls" and online commentators.

But that failed to stop further incidents deemed racially insensitive or worse.

In 2017 the Daily Mail dug up Meghan's family tree, branding her "upwardly mobile!"

"How in 150 years, Meghan Markle's family went from cotton slaves to royalty," screamed its headline.

After the birth of Harry and Meghan's son, Archie, last May, BBC sports presenter and commentator Danny Baker shared an image of a couple holding hands with a chimpanzee dressed in clothes.

Baker later claimed it was a "stupid gag" but was promptly sacked by the national broadcaster for a "serious error of judgement".

Controversy has even raged over the actions of those within the Windsor family.

Princess Michael of Kent, who is married to Queen Elizabeth II's cousin, was forced to apologise after wearing a blackamoor brooch to a Buckingham Palace lunch attended by Meghan in 2017.

Critics argue the style of jewellery is racially offensive because it fetishises images of slavery.

Some deny racism has played a part in Meghan's departure, which has inevitably been dubbed "Megxit" after Britain's controversial and tortuous Brexit process to leave the European Union.

Interior minister Priti Patel said she had not seen that "through any debates or commentary".

"I think we live in a great country, a great society, full of opportunity, where people of any background can get on in life," she told the BBC.

"The press use Meghan's race as a stick to beat her with sadly," said etiquette expert William Hanson last week.

"Just as they use Catherine's class as a stick to beat her," he added, referring to Prince William's wife, who hails from a middle-class family.

Defenders of Meghan have also pointed to the unfair coverage she has endured in comparison to other royals.

Branded "duchess difficult" and "capricious" by the British press, Meghan has been repeatedly criticised for doing things other royals have done without generating any negative headlines.

They include guest-editing a magazine, cradling her baby bump when pregnant and eating avocados.

Newspapers criticised for their coverage appear unwilling to admit any wrongdoing, with best-selling tabloid The Sun claiming Tuesday there was "no evidence of press bigotry".

He added "they" referred to "the liberal-Left commentariat... who hate Brexit, hate ordinary people and have, for some reason, grown to love our departing royals, Prince Harry and Meghan".

"There will be no time to discuss the laziness, complicity and complacency of a media class that has turned racism into a spectator sport," she lamented.

"No time to talk about the rightwards creep of our political culture under successive Tory governments that have consistently turned up the dial on nativism.".