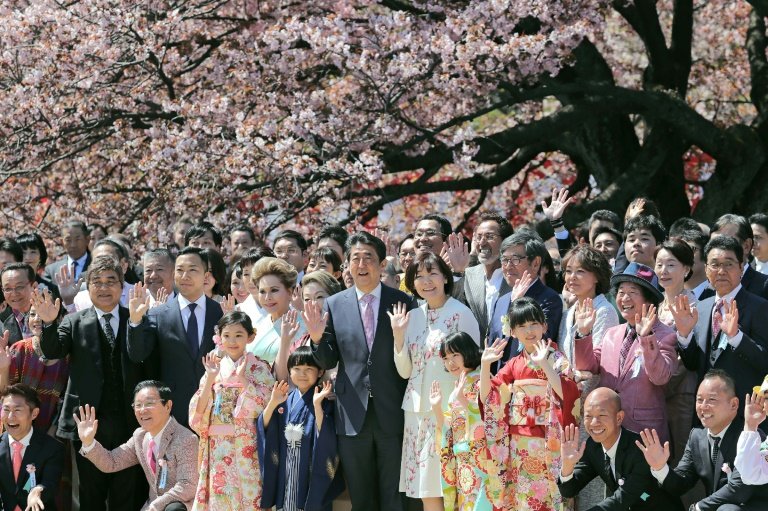 It might be the most Japanese of political scandals: a furore over Prime Minister Shinzo Abe's guest list at a party to mark the annual cherry blossom season.

As scandals go, it has plenty of juicy elements -- alleged mafia guests, disappearing evidence, even gaffes by Abe, who appeared to lay blame for shredded documents on a disabled worker.

It's the latest headache for Japan's longest-serving premier, who has already weathered two cronyism scandals in recent years and has faced an almost daily drubbing by opposition lawmakers since the scandal emerged in early November.

The outcry involves a tradition that dates back to 1952 -- a publicly funded cherry blossom party intended to honour the great and the good for their achievements.

The seemingly innocuous gathering become a lightning rod for criticism after claims Abe stacked the guest list with some 850 supporters from his local constituency -- with the party costing 55 million yen ($504,000) in public money.

When the opposition smelled blood, additional allegations piled in: the chairman of a disgraced company was once a guest, a member of one of Japan's infamous yakuza mafia attended in 2019.

The opposition bloc demanded the guest list for this year's event be produced, only to be told it had been shredded on the very same day the request was made.

Just a coincidence, Abe insisted to outraged opposition lawmakers: the documents were shredded during "the work hours of a part-time employee with disabilities," he added, in remarks that many saw as an attempt to blame the worker.

The scandal has seen public support for Abe's government drop six or seven points to around 50 percent or lower, but experts said Abe is likely to weather the storm.

"Voters are not convinced by the Abe administration's explanation of the scandal," Junichi Saito, a professor of politics at Tokyo's Waseda University, told AFP.

"But opinion polls will not likely fall by more than 10 percentage points because there is no other candidate for a prime minister."

Abe benefits from lingering disillusionment with the country's opposition, with voters still leery after the disastrous performance of the centre-left Democratic Party-led government in 2009-2012. 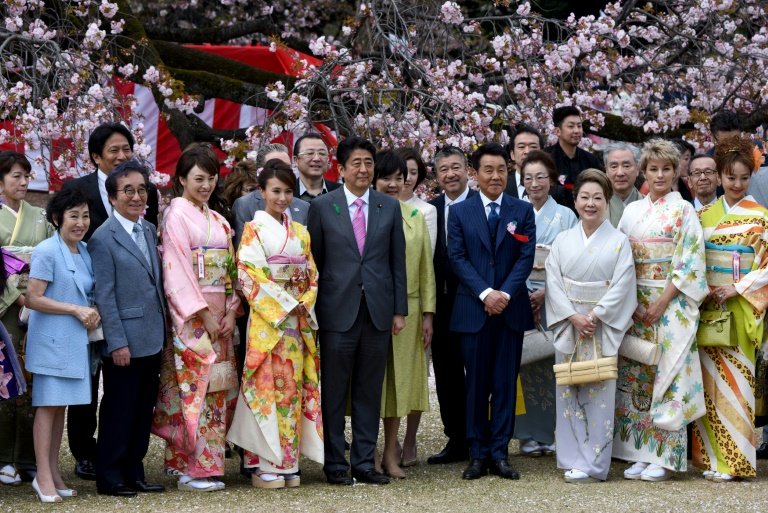 "I'm sceptical at this point that the opposition will win public support if it manages to dent Abe's with this scandal," Tobias Harris, senior vice president of consulting firm Teneo, told AFP.

"The worst case scenario for Abe is that (his ruling party) LDP supporters abandon him, which hasn't happened thus far, giving him a floor of around thirty percent (support)," he added.

"But even then, without a smoking gun I think Abe can hold on for a long time."

Allegations have continued to emerge, including claims that Abe invited supporters to a dinner at a luxury hotel and let his political support group pick up part of the tab in violation of election law.

His government denies that, and a criminal investigation is viewed as extremely unlikely.

"This administration is trying to avert criticism" by withholding documents, and that "hurts a system (of accountability) that is necessary for democracy".

Next year's cherry blossom party has been cancelled, with Abe promising to "reflect on" how the gathering has been organised.

That is likely to be enough to tide him over, Junichi Takase, professor of politics at Nagoya University of Foreign Studies, told AFP.

"The opposition bloc has nothing else in their arsenal except attacking Mr Abe for this kind of scandal," he said.

"Mr Abe is good at handling crises. He admitted there was something wrong, apologised, and wants to move on -- that's better than lying."