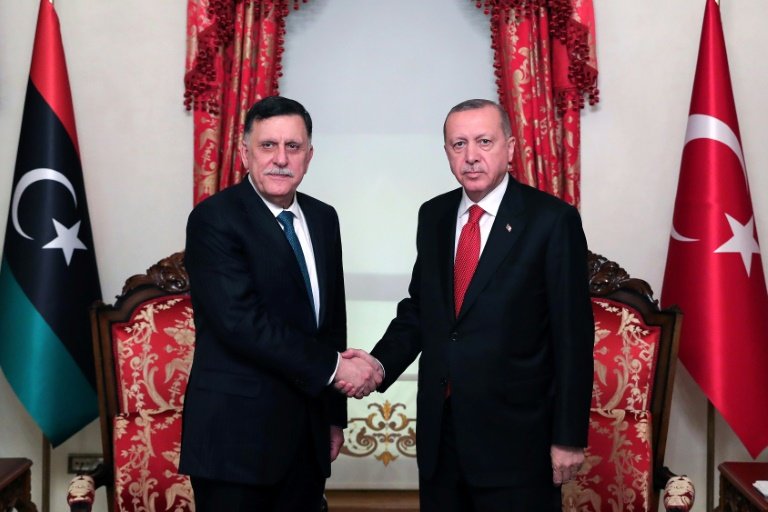 Greece's foreign ministry on Friday said it was expelling the Libyan ambassador for failing to disclose the contents of a disputed maritime jurisdiction deal with Turkey that has raised hackles in the region.

"I regret to announce that the Libyan ambassador was summoned to the ministry this morning and was informed of his expulsion," Foreign Minister Nikos Dendias told reporters, adding that the envoy had been given 72 hours to leave Greece.

Turkish President Recep Tayyip Erdogan last week met with the head of the Tripoli-based Government of National Accord (GNA), Prime Minister Fayez al-Sarraj, to sign agreements on security and military cooperation, as well as maritime jurisdictions.

Part of the deal sets a maritime boundary between the two countries, which Greece says fails to take into account the island of Crete.

"Greece does not have any diplomatic representation in Libya otherwise we would have expelled their ambassador," he said.

In a speech to parliament, Greek Prime Minister Kyriakos Mitsotakis said the agreement was "ignorant of geography and history" and had already been condemned by the US, the EU, Egypt and Israel.

"There are no borders between Turkey and Libya. Illegality does not produce law," Gennimatas said.

On a visit to Rome on Friday, Turkish Foreign Minister Mevlut Cavusoglu accused Athens of needlessly trying to intimidate Tripoli.

"What they have done is really wrong. It does not fit diplomatic courtesy. Is it correct to threaten a country?" Cavusoglu said.

"Libya is a proud country and nation and will not bow to such a threat," he said.

Dendias earlier this week had called on the Libyan ambassador Mohamed Younis Menfi to provide details on the deal, which Athens said he had failed to do.

Dendias insisted that the move does not constitute a break of relations with Libya.

The deal comes despite calls from the Arab League -- which includes Libya -- to end cooperation with Turkey in protest over its military offensive against Kurdish forces in Syria last month.

Libya has been mired in chaos since a NATO-backed uprising that toppled and killed dictator Moamer Kadhafi in 2011.

Saudi Arabia, Egypt and the UAE back Khalifa Haftar, a military strongman in eastern Libya who launched an offensive in April in a bid to seize Tripoli from fighters loyal to the GNA.

The head of Libya's parliament Aguila Saleh Issa, an ally of Haftar, is expected in Athens for talks next week.

There is also tension between NATO allies Greece and Turkey over the high number of asylum-seekers arriving on Greek islands, and a broader setting of regional rivalry over the exploitation of untapped energy reserves in the eastern Mediterranean.