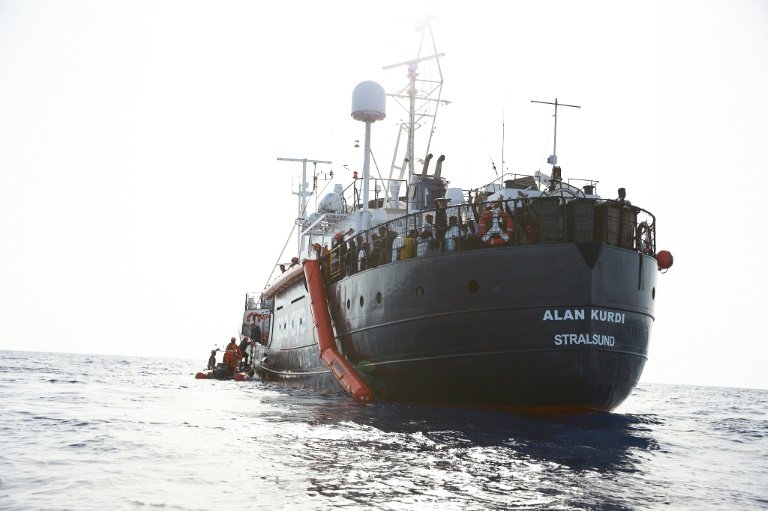 The rescue ship Alan Kurdi is named after the Syrian child whose drowning in the Mediterranean in 2015 brought global attention to the migrant crisis / © sea-eye.org/AFP/File

A German charity on Monday said its rescue ship was heading to Italian shores with 69 migrants on board, hoping they will be allowed to disembark.

The ship, the Alan Kurdi, is named after the Syrian child whose drowning in the Mediterranean in 2015 brought global attention to the migrant crisis.

The Sea-Eye charity said the ship had been unable to contact the Maltese coast guard for help and was therefore now directed towards Italy.

"We are horrified at the irresponsible behaviour of European sea rescue services," Sea-Eye spokesman Julian Pahlke told AFP, saying they had fallen short of their "duty to co-ordinate search and rescue".

The Alan Kurdi has rescued 84 migrants in recent days, 15 of whom were allowed to go to Italy because of their condition.

But the charity said it was now asking Italy for at least 10 more migrants requiring medical assistance to be allowed to disembark.

Barbara Hammerl-Kraus, a doctor on board, said the migrants were "all in a bad state".

The Alan Kurdi has been active since 2018 and has rescued more than 400 people so far.

The fall of Libyan dictator Moamer Kadhafi in 2011 turned the country into a key departure point for African and Middle Eastern migrants heading to Europe.

The deal was meant to end the long, drawn-out negotiations that have seen vulnerable asylum-seekers including babies stranded at sea, sometimes for weeks.