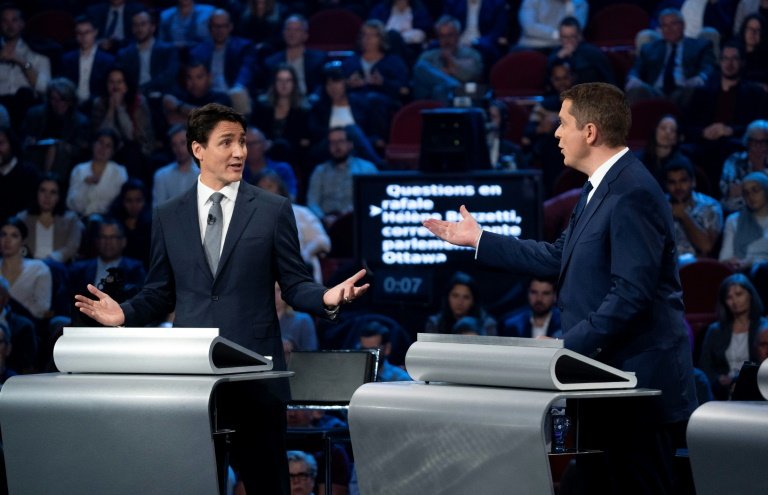 Canada's Prime Minister and Liberal leader Justin Trudeau (L) and Conservative leader Andrew Scheer, pictured here during a debate October 10, are in a dead heat on the eve of national elections / © POOL/AFP/File

Canadian Prime Minister Justin Trudeau and his Conservative rival Andrew Scheer slugged it out Sunday on the last day of a rancorous election campaign.

With Canadians going to the polls on Monday, the Liberals and Tories went into the home stretch in a dead heat, each with about 31-32 percent support after 40 days of mudslinging.

Pollsters are predicting a minority government will result -- led either by the Liberals or the Conservatives -- as the smaller New Democratic Party (NDP), Green Party and Bloc Quebecois have continued to chip away at the frontrunners' lead.

Their voices hoarse, Trudeau and Scheer made last, desperate pitches to undecided voters over the weekend in key battlegrounds in British Columbia, Ontario and Quebec provinces.

"We need a strong, progressive government that will unite Canadians and fight climate change, not a progressive opposition," Trudeau told a rally in a suburb of Vancouver after whistle-stops in Ontario, Manitoba and Alberta. 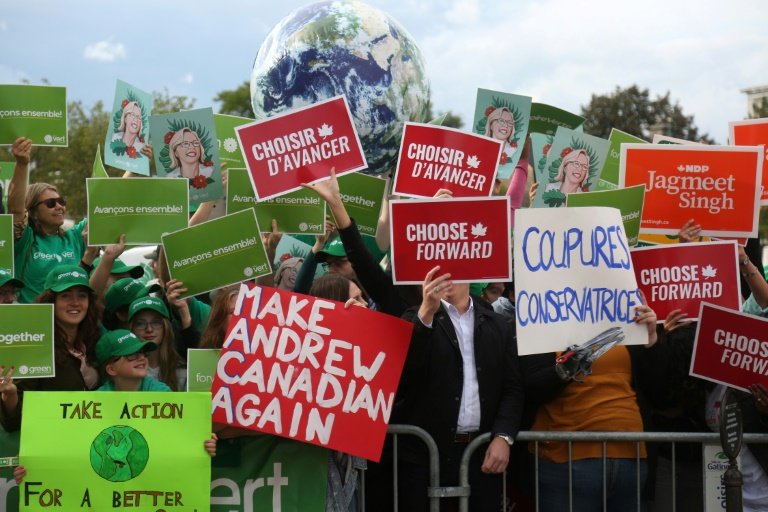 Scheer, also criss-crossing the country over the weekend, accused the Liberals of being spendthrift, saying on Sunday in Vancouver: "The choice tomorrow is between a Liberal-NDP coalition that will run massive deficits and leave less money in your pocket or a Conservative government that will get back to balanced budgets and make life more affordable.

"Trudeau would pay any price to stay in power and he'd use your money to do it," he said. "We want Canadians to send Conservative MPs to Ottawa to undo the damage that Justin Trudeau has caused."

The campaign, which Trudeau has described as the nastiest in Canadian history, has been "a desert from a public-policy point of view," said pollster Nik Nanos of Nanos Research.

Trudeau has faced an unexpected surge from the NDP and Greens on the left, and from the separatist Bloc Quebecois, back from the dead and riding a new Quebec nationalist wave, as he battles disenchantment with his leadership after four years in power.

For his part, Scheer has struggled to convince voters to look past his bland, minivan-driving dad persona and the party's minimalist platform to give the rookie leader a chance to govern. 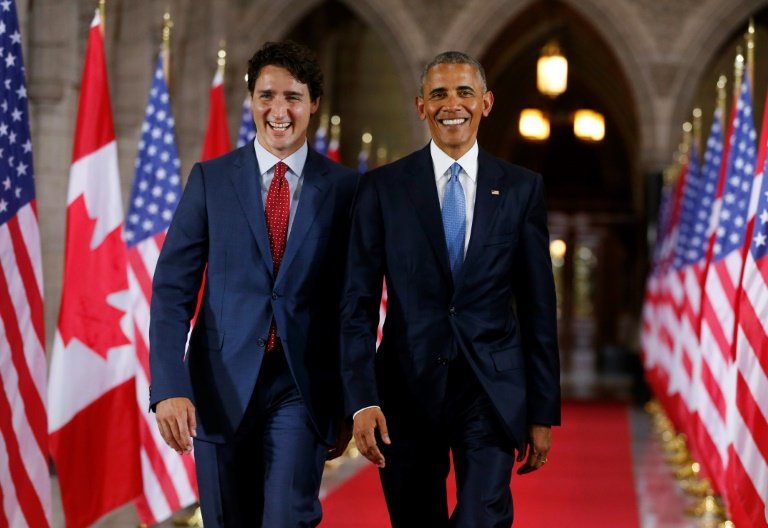 Attack ads, sometimes skirting the truth, have accused the Liberals of planning to raise taxes and legalize hard drugs, and the Tories of allowing assault rifles on the streets and restricting abortion services.

Liberals have urged their supporters to vote strategically to prevent a rollback of Trudeau's progressive policies by the Tories.

Former US president Barack Obama chimed in with an endorsement of Trudeau, calling him an "effective leader who takes on big issues like climate change."

"The world needs his progressive leadership now," Obama said in a recent tweet.

Plagued by a blackface scandal and accused of ethics lapses in the handling of the bribery prosecution of an engineering giant, Trudeau has seen his star dim and his personal popularity slip over the past year.

At a stop Friday night in Vaughan, Ontario, he invoked the memory of his father, the late prime minister Pierre Trudeau, who was a driving force behind the establishment of modern Canada.

"My father always used to tell me that when you're paddling across a big lake and the clouds get darker and the wind comes up and the waves start to show white caps and break a little more, there really is only one thing to do: sing louder and paddle harder," he said.

"And that's what we do as Liberals."

At another recent rally, Trudeau was forced to take the unprecedented step of wearing a bulletproof vest on stage amid heavy security due to an unspecified threat.

Scheer, meanwhile, stepped up efforts to instill fears that the Liberals and New Democrats would form an alliance that he said would be the "worst possible outcome" for Canada.

The only formal coalition in Canada's parliament was in 1917 during World War I.

Throughout the campaign Scheer faced criticism for padding his resume and over his personal opposition to abortion and gay marriage.

Repeatedly he has had to calm supporters chanting "Lock him up!" against Trudeau, inspired by the line US President Donald Trump's supporters used against Hillary Clinton in 2016.

On Saturday, Scheer sidestepped accusations that the Tories had worked to smear and "destroy" his former rival for the party's leadership, Maxime Bernier, who went on to start his own People's Party.

The People's Party has situated itself to the right of the Conservatives and could draw votes away from the Tories.

The Globe and Mail reported that a communications firm was tasked with developing a social media campaign portraying members of the People's Party as racist.

Following the report, Bernier protested to Elections Canada and accused Scheer of being "prepared to steal the election with lies and manipulation," adding that the Conservative leader "did not deserve Canadians' trust."