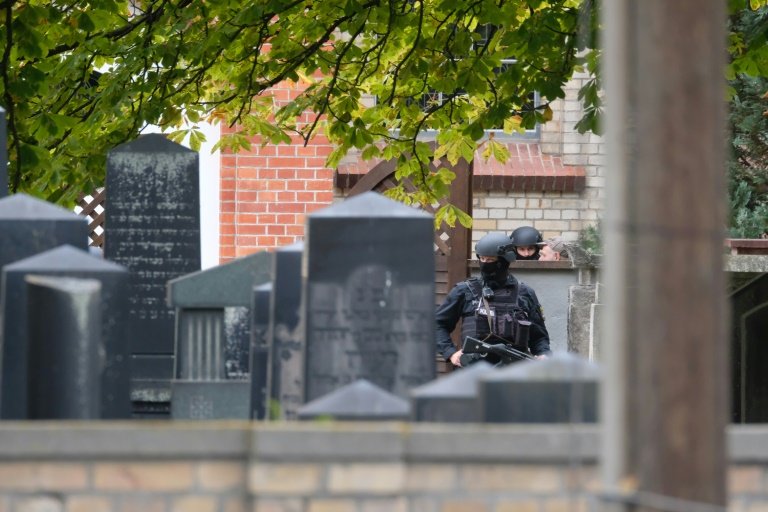 Silence gripped the abandoned streets of the eastern German city of Halle Wednesday as elite anti-terror forces carried out a manhunt after a deadly shooting at a synagogue and a Turkish restaurant.

Police ordered residents to stay inside and close all doors and windows after they apprehended one suspect and chased possible accomplices in the attack that killed two people and seriously wounded two others.

Officers in riot gear patrolled police lines near the scene of the crime where a woman was shot dead outside the Jewish house of worship and a man gunned down at a nearby kebab shop.

"We are carrying out an intensive search and ask the public to stay at home," the Halle police force tweeted.

Normally busy city streets were closed to traffic, with the only vehicles circulating police cruisers and ambulances with flashing lights.

Dozens of German Jews had gathered in prayer at their synagogue in Halle on the high holiday of Yom Kippur when the gunfire outside began.

Max Privorozki, head of the Jewish community in the city, which traces its roots to the 10th century, said the temple's security system had stopped what could have been a bloodbath.

"We saw through the camera of our synagogue that a heavily armed perpetrator wearing a steel helmet and rifle was trying to shoot open our door," Privorozki told the daily Stuttgarter Zeitung. 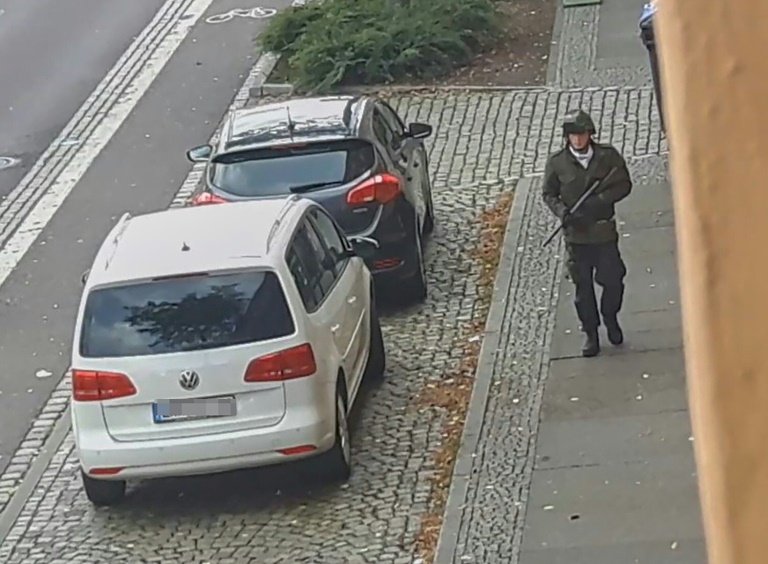 "The man looked like he was from the special forces. But our doors held firm."

At least one perpetrator then tried to force open the gate of the neighbouring Jewish cemetery, while the body of the lifeless young woman lay outside, pierced with bullets.

Jewish synagogues, schools and community centres throughout Germany have relied on police protection for decades since the Holocaust, and many have stepped up their own security measures in response to a sharp rise in anti-Semitic violence in recent years.

Privorozki told news website Spiegel Online that the gunman fired several shots at the door and threw numerous "Molotov cocktails, fireworks or grenades to get inside".

"But the door remained closed, God protected us. The whole thing took five to 10 minutes."

Recounting the heart-stopping moments for the 70 to 80 members of the congregation, Privorozki said they swung into action with astonishing bravery to protect themselves.

"We barricaded our doors from inside and waited for the police," he told Stuttgarter Zeitung.

"And then we carried on with our service."

Meanwhile at the Turkish restaurant about 600 metres (yards) away, patron Conrad Roessler said he was seated when "a man wearing a helmet and military uniform" tossed a hand grenade.

"The grenade hit the door and exploded," he said. "(The assailant) shot at least once in the shop, the man behind me must be dead. I hid in the toilet and locked the door."

As anti-terror prosecutors took over the investigation and searched for a motive, the head of the Central Council of Muslims in Germany, Aiman Mazyek, expressed his "shock" and called for solidarity between the country's religious communities.

"My thoughts and prayers are with you, dear Jews," he tweeted.

"Shalom on #YomKippur -- hatred will never reach our hearts. Deep sadness for the victims. Shame on those who bring suffering to Jewish life, to our country."