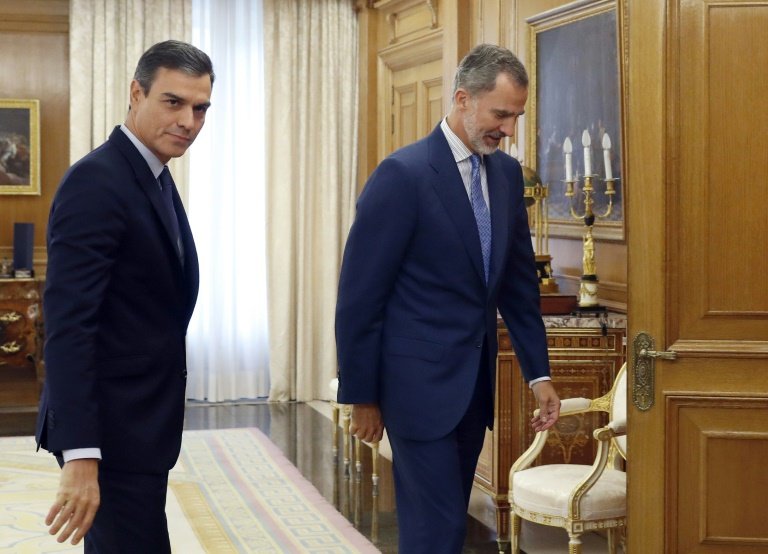 Spain will hold a repeat general election in November -- its fourth in four years -- after acting Prime Minister Pedro Sanchez failed to secure the support he needs from other parties.

"Spain is bound to hold new elections on November 10," Sanchez told a news conference late on Tuesday after King Felipe VI met with party leaders and concluded there was no candidate with enough support to form a government.

Sanchez's Socialists won an April general election but only secured 123 of the parliament's 350 seats. That left him dependent on support from other parties in Spain's deeply fragmented legislature to be confirmed premier for another term.

Sanchez had until next Monday to be confirmed or else fresh elections would be automatically called for November 10, but his talks with other parties to try to win their backing have been fruitless.

After wrapping up two days of talks with party leaders on Tuesday, the king said in a statement that he would not put forward a new candidate to seek the confidence of parliament to become prime minister because no party leader had majority support in the assembly.

Sanchez blamed his rivals for the deadlock, saying he had tried "by all possible means but they made it impossible for us."

He urged Spaniards to "speak more clearly" when they vote again by increasing the Socialists' majority and give the country the "stability" needed to "face the great challenges" before it.

Spain, the fourth-largest eurozone economy, faces several problems for which it needs a stable government: an ongoing separatist movement in its northeastern region of Catalonia, high unemployment, low wages and job insecurity.

The country has been gripped by political instability since the December 2015 elections ended the traditional two-party system with the emergence of far-left group Podemos and the business-friendly Ciudadanos.

And the rise of far-right upstart Vox, which entered parliament following April's election, has further complicated the political picture.

Polls suggest the Socialists would win more seats in a repeat election but still fall short of a majority.

"A new election would return another fragmented parliament, which means the country would probably not have a government before the end of the year," said Teneo analyst Antonio Barroso.

Sanchez failed twice in July to be confirmed by the assembly after he was unable to reach an agreement with Podemos over the formation of a coalition government -- which would have been Spain's first since the country returned to democracy following the death of long-time dictator General Francisco Franco in 1975.

The Socialists had initially agreed to form a coalition, albeit reluctantly, with Podemos, offering several government portfolios, but the far-left party refused, saying the posts did not carry enough political clout.

The Socialists restarted their talks with Podemos but the negotiations again hit an impasse.

Another potential solution was raised on Monday by the centre-right Ciudadanos, which laid out its conditions for abstaining from any vote of confidence which would enable Sanchez to be confirmed without requiring the support of Podemos.

The business-friendly party led by Albert Rivera had until then refused to extend any support to Sanchez.

Rivera proposed that both Ciudadanos and the rightwing Popular Party (PP) jointly abstain during any investiture vote. But the PP, whose votes would be needed for this option to work, rejected it.

In a tweet, Podemos leader Pablo Iglesias said Sanchez has made a "huge historical mistake forcing another election because of an obsession with hoarding absolute power".

Sanchez came to power in June 2018 by winning a surprise no-confidence vote against conservative predecessor Mariano Rajoy with the support of Podemos as well as Catalan separatist parties and Basque nationalists.