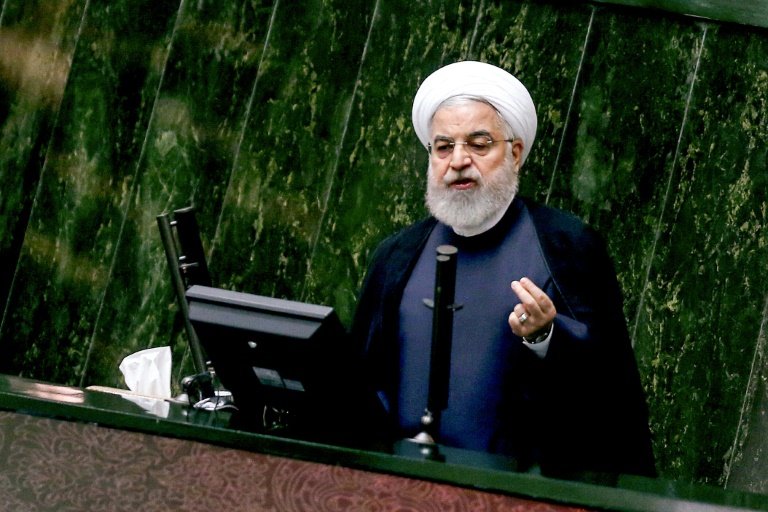 Iran has repeatedly dismissed talk of a meeting between President Hassan Rouhani and US counterpart Donald Trump, insisting Washington must first lift its crippling unilateral sanctions on Tehran / © AFP/File

Iran on Wednesday rejected the possibility of a meeting between President Hassan Rouhani and US counterpart Donald Trump, after the White House signalled it was open to such an encounter.

Two of Trump's top lieutenants on Tuesday indicated he was ready to meet the Iranian president without preconditions, after the US leader sacked his hawkish national security adviser John Bolton.

But Secretary of State Mike Pompeo and Treasury Secretary Steven Mnuchin stressed the United States would maintain its campaign of "maximum pressure" against the Islamic republic.

The idea of a Trump-Rouhani meeting was floated last month by French President Emmanuel Macron, who has been spearheading European efforts to de-escalate tensions between Iran and the United States.

The arch-foes have been at loggerheads since May last year when Trump unilaterally withdrew from a 2015 nuclear deal and began reimposing crippling sanctions on Iran.

Majid Takht-Ravanchi said a meeting could take place only if Washington ends its "economic terrorism" by lifting all of its sanctions against Tehran.

The Iranian envoy said any meeting must also be held in the framework of the group of major powers that negotiated the 2015 nuclear deal.

"As long as the US government's economic terrorism and such cruel sanctions are imposed on the Iranian people, there is no room for negotiations," he was quoted as saying by IRNA.

The diplomat said Trump's decision to dismiss Bolton -- a hardliner accused of pushing Trump towards war against Iran -- was a matter for the Americans.

"The removal of John Bolton is an internal affair and we don't take stands on domestic issues," said Takht-Ravanchi.

Asked about the impact of Bolton's sacking on long-fraught relations between Iran and the United States, he said it was "too soon" to make any judgements.

"Whether the extremist policy of the US changes or not depends on various factors in US foreign policy," he told ISNA.

Bolton is a controversial figure closely linked to the 2003 invasion of Iraq and other aggressive US foreign policy decisions.

He had been seen as one of the main driving forces in the White House's muscular approach to Iran, North Korea and Venezuela among others.