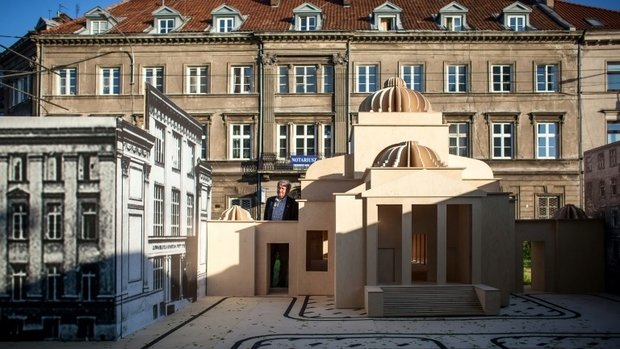 A model of Warsaw's destroyed synagogue.

The ceremony commemorating 80 years since the outbreak of WWII will take place on Sunday 1 September, remembering the day German troops invaded Poland.

On 1 September 1939, Nazi troops invaded Poland and consequently kicked off a war that would shape the course of history - and claim the lives of millions of people. Sixteen days after Germany invaded Poland from the west, the Soviet Union invaded the country from the east.

On Sunday, Warsaw will mark 80 years since the outbreak of World War II with commemorations attended by various heads of state, including Luxembourg's Prime Minister Xavier Bettel. US President Donald Trump cancelled his trip to Poland to deal with hurricane Dorian and the US will be represented by Vice President Mike Pence anniversary instead. The only major world leader to be in attendance on Sunday is German Chancellor Angela Merkel.

Luxembourg was invaded by German troops on 10 May 1940. Grand Duchess Charlotte left the country along with her ministers and went into exile.

1 September also marks another important day in Luxembourg's historical calendar: the general strike of 1942. The protests opposed a directive by Gauleiter Gustav Simon that conscripted young Luxembourgers into the German Wehrmacht. A nationwide general strike originating in Wiltz triggered violent responses from the German authorities. 21 strikers were sentenced to death.

The final death toll was high: armed conflict and Nazi terror claimed the lives of around 5,700 Luxembourgers - 2% of the country's total population.