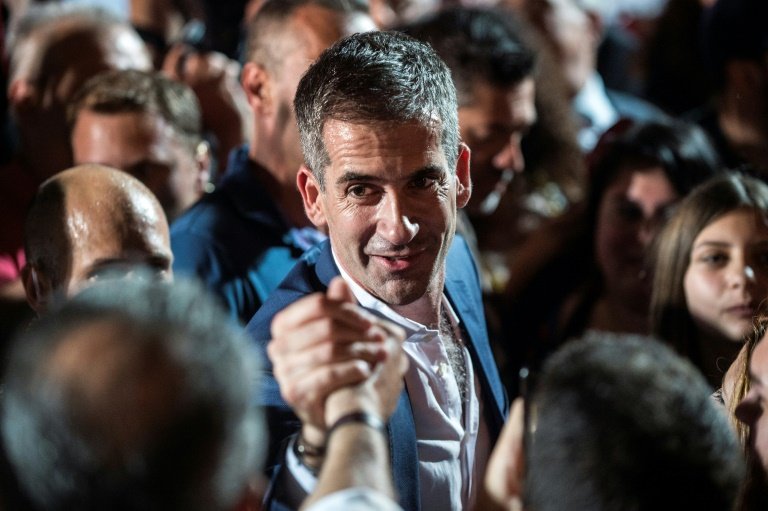 Newly-elected Athens mayor Costas Bakoyannis, scion of one of Greece's most powerful political families, takes the oath of office Sunday after vowing to revitalise the battered capital.

Newly-elected Athens mayor Costas Bakoyannis, scion of one of Greece's most powerful political families, took his oath of office Sunday pledging to turn the crisis-battered capital into "a safe, clean and bright" European metropolis.

"Over the next four years I pledge to be a servant to Athenians," the 41-year-old told a crowd of supporters at the ceremony.

"Athens is an idea... as proud as we are of this city's historical past, we are saddened by its present state," Bakoyannis said, adding that many residents of the capital "feel forgotten, invisible."

"We want to lift the city high, without exceptions and without exclusions," said the six-footer whose election in June made political history.

His mother Dora Bakoyannis was the first female mayor of Athens ahead of the 2004 Olympics. And last month, Bakoyannis' uncle Kyriakos Mitsotakis was elected prime minister with the conservative New Democracy party.

A decade apart in age, uncle and nephew have made Greek political history by simultaneously holding two of the country's leading political posts.

They have also stepped into posts formerly occupied by their respective parents, under the colours of the New Democracy party where the Mitsotakis family has been a force for decades.

A father-of-four, the new mayor officially takes over his duties on September 1 in a city where the damage of a decade-long crisis is still evident: abandoned or dilapidated buildings, shuttered shops, broken sidewalks, and pockets where drugs and prostitution thrive.

Bakoyannis chose to take his oath of office in the run-down district of Akadimia Platonos, which was once the site of Plato's Academy.

Like his uncle the new PM, Bakoyannis is big on public safety, seeking to capitalise on the previous leftist government's perceived inaction against anarchist vandalism and lawlessness.

After vandals smeared paint on one of his electoral kiosks ahead of the first municipal electoral round on May 26, Bakoyannis let loose.

"They should cross themselves, if they believe in God, that I don't become mayor," he said.

Bakoyannis has promised to focus on the "obvious" -- "Safety, cleanliness, lighting."

Among his pledges is a 54.4-million-euro ($60-million) promenade connecting some of the capital's main landmarks, and building playgrounds and cycling routes.

The incoming mayor was just 11 years old when his father Pavlos Bakoyannis, a lawmaker with New Democracy, was gunned down in 1989 by the far-left November 17 organisation.

Bakoyannis has said it "drove him nuts" that the previous administration of Alexis Tsipras had repeatedly granted prison leave to his father's killer Dimitris Koufodinas.

The Harvard-educated Bakoyannis was first elected mayor of the small mountainous town of Karpenissi in 2010 at the age of 33.

He had previously served as special advisor to his mother when she was foreign minister from 2006 to 2009.

As mayor of Karpenissi he is credited with bringing additional tourism to the area.

In 2014 he was elected to the post of regional governor for central Greece.