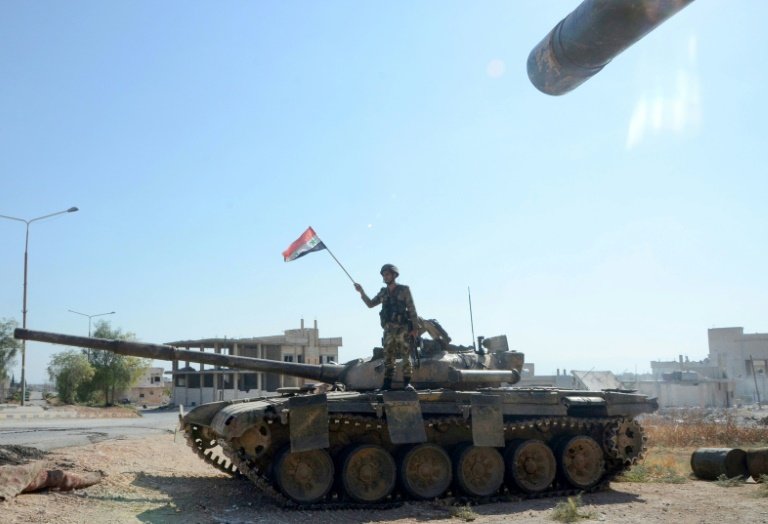 Syrian government forces massed Saturday in northwest Syria in an apparent bid to press an offensive against jihadists and allied rebels that has heightened tensions with neighbouring Turkey.

The Syrian military has since Wednesday seized the key town of Khan Sheikhun from jihadists and allied rebels and overran the countryside to the south, encircling a Turkish observation post in northern Hama.

In Khan Sheikhun, smoke still curled into the sky from multiple locations on Saturday among buildings partially or fully destroyed by the earlier fighting.

The town was almost deserted of civilians, according to an AFP team on a press visit organised by the Syrian army.

The battle in northern Hama, where the army has retaken several other areas, "lasted no more than a few hours, due to the significant fire power that preceded the ground operation", an army officer told AFP, asking not to be named.

"The day after they controlled the area south of Khan Sheikhun, regime forces are massing in the area north of it," Rami Abdel Rahman, head of the Britain-based monitoring group, told AFP.

They are "preparing to continue their advance towards the area" of Maaret al-Numan, a town some 25 kilometres (15 miles) to the north, he said.

After eight years of civil war, the jihadist-run region of Idlib on the Turkish border is one of the last to escape the Syrian government's control.

Backed by Russia, President Bashar al-Assad's forces have chipped away at the south of the stronghold in recent weeks after months of deadly bombardment. 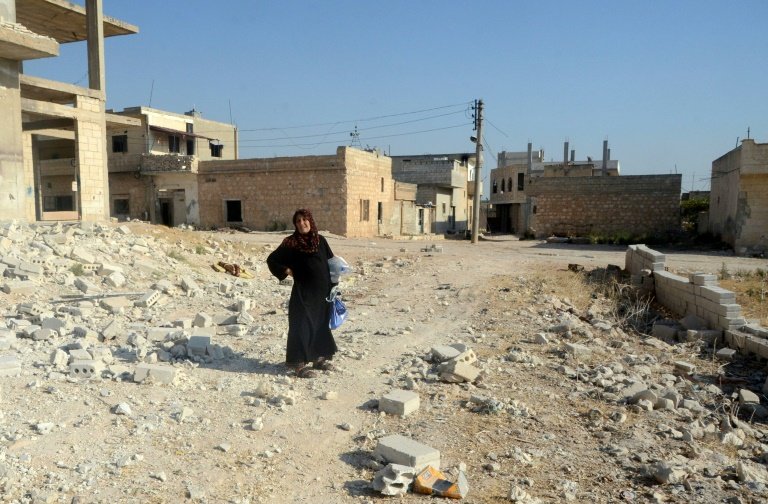 On roads serving Khan Sheikhun, tanks could be seen by the AFP reporters, while small trucks carried soldiers, deployed in their dozens in several locations.

The Syrian national flag flew near a school, in front of which troops stood guard.

The Turkish military's observation post -- an outpost located in Morek, part of the region centred on neighbouring Idlib province -- stood just under a kilometre away.

The position is surrounded by high concrete walls, barbed wire and surveillance cameras.

While significant deployments of Syrian government troops clearly controlled the surrounding area - and access routes -- there did not appear to be a military cordon around the Turkish position.

Turkish troops have been deployed at a dozen points around the Idlib region of some three million people, in an attempt to set up a buffer zone to protect the area.

A deal between Russia and rebel backer Turkey signed in September last year sought to set up the demilitarised area to avert an all-out government assault, but jihadists refused to withdraw.

The apparent isolation of the Turkish position has raised tensions between Ankara and Damascus.

"It is an international matter, we do not consider it," the Syrian officer told AFP.

"We pass by the Turkish position at Morek, the Turkish soldiers haven't turned on us, nor us on them. We see them clearly and they see us too."

But Assad advisor Buthaina Shaaban on Friday accused Turkey of "turning the observation points into spots for transporting weapons and occupying a part of our land".

Turkey's Foreign Minister Mevlut Cavusoglu vowed the same day that his country's troops would not withdraw from the position in Morek.

Turkish President Recep Tayyip Erdogan is to visit Moscow on Tuesday for talks with his Russian counterpart Vladimir Putin.

They and their Iranian counterpart Hassan Rouhani -- whose country supports Assad -- are also to convene in Ankara on September 16. 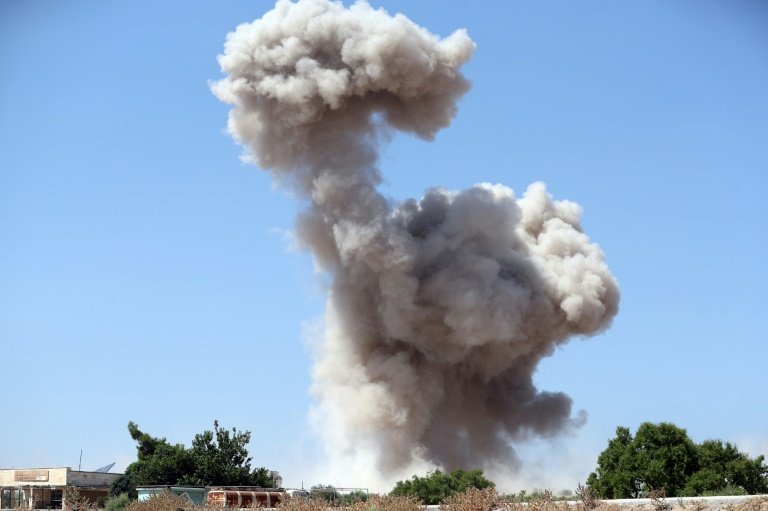 Smoke billows into the sky following a reported regime air strike on the eastern outskirts of Maaret al-Numan in Syria's northwestern province of Idlib on August 24, 2019 / © AFP

On Saturday, heavy bombardment hit the region in an apparent preparation for a further push north, Abdel Rahman said.

An AFP correspondent saw thick grey smoke billow up into a clear blue sky after a strike on the outskirts of Maaret al-Numan.

After Khan Sheikhun, Maaret al-Numan is the next town on a key highway running across Idlib province that analysts say is coveted by Damascus.

Full government control of that road would allow it to fully connect the capital with second city Aleppo, retaken from opposition fighters in late 2016.

Also Saturday, a car bomb in Idlib city killed two people, the Observatory said, but there was no immediate claim of responsibility.

Russian and Syrian government bombardment since late April has killed around 900 civilians, the Observatory says.

A further 400,000 have been forced to flee their homes, according to the United Nations.

Syria's war has killed more than 370,000 people since starting with the brutal repression of anti-government protests in 2011.